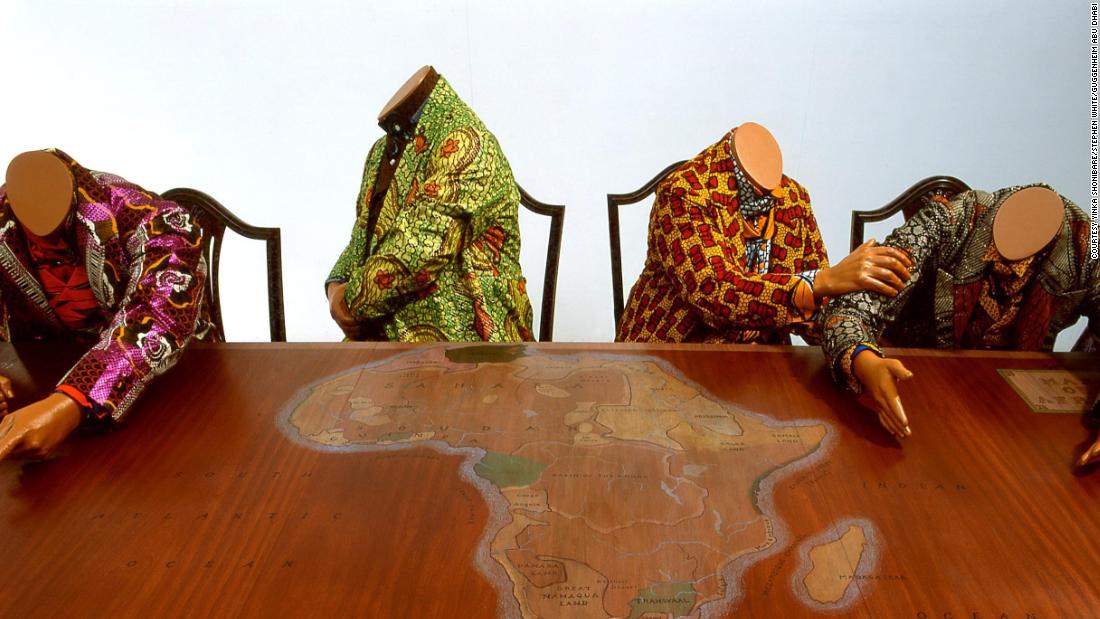 From art, to film, fashion and music, Avant-garde Africa meets people and visits places that make Africa one of the most exciting and important cultural reference points in the world.

An artist born in London, Jink Shonbare, is also a favorite of the British art world and one of her most attractive critics. From the return to the UK from Lagos, where he grew up more than 25 years ago, he received all the accolades that a British art star deserves: he was nominated for the Turner award in 2004, commissioned to create the installation of Trafalgar Square Fourth Plint in 2010 year and was elected a royal academician in 2013.

In January he was appointed commander of the Order of the British Empire, a title he added to his professional name. This is ironic, since his work constantly undermines colonial narratives and comments on the relationship between Africa and Europe.

Shonibare is best known for using Dutch wax prints. Initially inspired by Indonesian batik prints produced by the Dutch and sold to Western Africans, textiles today are widely considered African printing. His international legacy speaks of colonial trade ties between Africa and Europe, and, on Shonibar, the wax seal is a symbol of the African diaspora and identity.

The fabric appears again in one of his latest works "The Creatures of Mappa Mundi". Here, Shonibar took the cornerstone of the British art history: Mappa Mundi of the Hereford Cathedral, the largest medieval mapped map, which describes how the famous world that Christian Europe understands in 1300.

In a series of quilted textiles, sewn in collaboration with the Hereford community groups, Shonibarre re-named the people and animals shown on the map to explore contemporary views on refugees.

Shonibare spoke to CNN about his new work, his upcoming artistic space in Lagos, and what it means to be a British-African artist.

CNN: What kind of conversations do you seek to challenge your job at this point in your career?

Jinka Shonbare: I think it's interesting if the work does something if the work is in dialogue with the audience. But I do not have to think that artists should prescribe the kinds of conversations that people should have for their work. You're just trying to explore things people may be interested in at that time and that's what I've tried to do with this job.

Do you need to be concerned about something to inspire your work?

I think the work can be produced on the basis of a series of emotions. You can produce a job because you are happy and want to do something quite joyfully as an artist, or you may have a dark mood and create something that is dark.

I want to mix both (and create) something that looks lush, and then there are layers of darkness. I tend to work more or less with ambivalence in my work, so you will find that there may actually be opposite emotions or opposing ideas in the work. Then I feel like working for me.

Are there specific questions that you are asking to go today?

Recently, apparently because of all refugee problems, I referred to immigration. It's just inevitable. You hear the stories about people who, unfortunately, drown in the sea and that you are human, you will be moved by it as an artist. Sometimes it is just the absurdity of things or ignorance about xenophobia.

I'm not always literally about the way I want to examine those problems. Sometimes it returns to history or literature, in the methodology and use of other types of folklore and narration to investigate contemporary concerns.

How important is Africa for your work?

Well, Africa is part of my identity, you know. I grew up in Lagos, Nigeria, and that is why I have memories of my childhood and I have a family there. And so I am working to express elements of my own identity and history of this, especially the colonial relationship of the United Kingdom in Nigeria. I do not have to have to define it, it's who I am.

You're in the middle of building a study space in Lagos. Do you think you are closer to Nigeria now than you were 10 years ago?

I think now I'm lucky to be able to invest in Nigeria. With the artist's residential space, which is currently being built in Lagos, I want to actually bring international artists who will have cultural exchanges with local artists.

Why do you want to create this space?

There is a very young population in Lagos and I think that the interest in visual arts really increases. It's a very dynamic place. There is Fashion Week in Lagos, the music scene is great, and the film industry Nollywood is also great. So, creative industries actually become much larger in Lagos, so it would be nice to be part of it.

This interview has been edited and condensed.