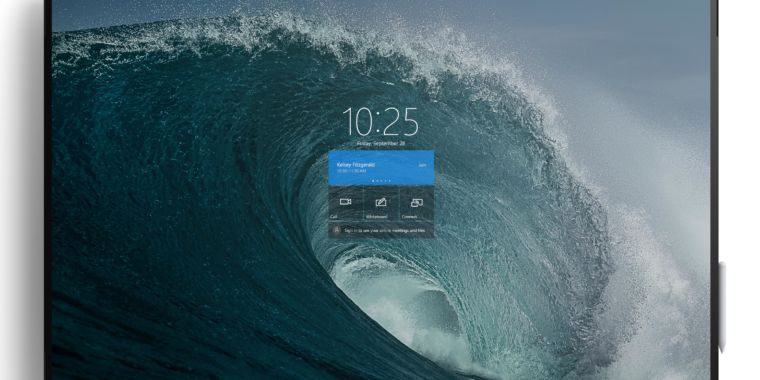 The Surface Center is Microsoft's hardware dedicated to collaboration within the meetings. It combines several roles, especially digital dashboard and video conferencing, with Teams, Skype and OneNote embedded in a single integrated integrated package. The 50-inch 2S is only unclearly specified: it has a customized 3: 2 aspect ratio of 4K (3840 × 2560 with 10 bits per pixel) with built-in touch sensors that work with both pens and a finger. Inside is the 8th generation Core i5 (Microsoft does not offer more specifics than that) with 8GB RAM and 128GB SSD storage; while it may look bad, Surface Hub 2 software is designed to not store data locally so 128GB should be plentiful. To support video conferencing, there are a series of eight microphones, front-end speaker and a remote 4K webcam. It will be available in the United States from June, with other markets coming in at a price of $ 8,999. One pen and one camera come in the box.

As we expect from Microsoft, the screen looks great. It has a matte finish (the reflections are too heavy to avoid otherwise), so it will not be hitting with a glossy finish, but it's far better than the many 1080p screens I've seen in offices around the world. Using techniques perfected by the construction of its portable surface devices, the Hub 2 display integrates the touchscreens into the glass on the screen, a design that makes the screen itself much thinner and reduces the paralx error when using a pen (it was 3mm in the first generation, up to 1.7mm in this).

The software running is an updated version of the original Surface Hub platform. Although based on Windows 10, this is not Windows 10; it can not work with arbitrary Win32 applications, only the Universal Windows Platform applications, and this is at least partly because of its specialized nature: when you're done with a meeting, something you draw on the board or in OneNote, conversation conversations, and so on, is stored on a network location, and then the entire session is discarded, leaving no traces of things that you have done, so the machine is clean for the next meeting.

But things are complicated here. The initial statement last May was not for "Surface Hub 2S". It was for Surface Hub 2, and Microsoft demonstrated a number of neat options: rotating the screen between its portraits and landscape modes was flawlessly uniform, and up to five of the systems could be put into portrait mode to make a gigantic display . Indeed, Surface Hub 2S has a built-in rotation mechanism. Try rotating the screen, but it will not calm down.

This is due to something published in September last year: Surface Hub 2 was split into two models, with 2S available this year and 2X next year. It is believed that the underlying cause of this division is the software. Surface Hub 2 is expected to deliver with an upgraded version of Windows 10 and a new version of its own user interface, and it will not be ready this year. Functions such as updating the smooth screen during rotation and multi-display capability are dependent on this new software, since this is not complete, Surface Hub 2S is missing.

However, Microsoft does not want to leave Surface Hub 2S buyers. When the Surface Hub 2X is released next year, it will be possible to upgrade the 2S units of specification 2X and the features. This will not be a simple software upgrade; it will require a hardware upgrade, too. Surface Center 2 places the CPU, memory and storage in a removable module that opens in the back of the system. The 2S owners will be able to install a 2X calculation module when they become available, and this will provide updated system software and new rotation / multi-screen objects.

The current 2S calculation module is designed to lock the rotation mechanism in place; there is a small bumper that prevents the screen from rotating. As far as I can tell, it is still possible and supported to switch between portrait and landscape modes, but it requires removing the 2S computing module, rotating the screen, and then re-inserting the 2S computing module to lock the screen again in the new orientation.

Specifications of the 2X computing module? Unknown. Availability? Also unknown. Price? Non-zero, but how big is the assumption. What will companies do with all their outdated 2S modules after they upgrade to 2X? Again, a mystery.

Microsoft says, quite reliably, that the system will always have a modular computing unit even if 2S / 2X split is not necessary. This is due to the general observation that computer technology is progressing faster than on-screen technology, and it is usually expected that it will take many years on the big screen after installation. The display could be a good ten years, say, but after five years, the original computing unit will look pretty old and outdated, so replacing it in the new would be a good way to ensure that system buyers can use their full life on the screen.

The module system is designed so that it is easy enough to replace the "blind" modules, reaching to the back of the machine while leaving it mounted on a wall.

The expansion port is divided between the calculation module and the base unit; the module's plugs include USB Type-A, USB-Type C, HDMI Input, Mini DisplayPort Output and yes, no Thunderbolt 3. The Type-C port can make USB and DisplayPort, but no more. The monitor is expanding this with four more USB-Type-C ports for working as a webcam.

Microsoft is also trying to build an additional ecosystem around the surface. Its launch presentation today was done in conjunction with Steelcase, which makes all kinds of office furniture. Steelcase showed the wheel with a circular mounted Surface Hub 2. This was connected to a $ 1,400 battery from the APC that can be mounted on the stand and power Surface Hub 2 for several hours. The wheel guards return school memories and the excitement you felt while the teacher switches the TV and video into the classroom, which shows that they will not learn, because instead of watching videos.

The first generation Surface Hub had two versions, one with a 84-inch screen, the other 55 inches. Long after its launch, the 84-inch machine was very difficult to buy because the demand was far higher than expected from Microsoft (this lack of expectation led the company to build it enough enough enough). Initially, Surface Hub 2 was announced only with 50-inch masks, but today Microsoft has revealed and briefly displayed a 85-inch screen with no rotating 16: 9. It will start in 2020.

If you want the display, but you are not too interested in the modular computer inside, later this year, Microsoft will begin selling Surface Hub 2 Display: 55-inch Surface Hub 2 with the computer (and several other pieces, such as Wi-Fi).

And finally, later in the year, Microsoft will also begin selling Surface Hub 2 with regular Windows 10 Pro or Enterprise. This will mean bypassing the special user interface of Surface Hub, but it will allow the use of arbitrary Win32 applications. I doubt that at some point, Microsoft will ship software that can offer Surface Hub interface, while also supporting regular Win32 applications, but we're still not at that stage. Price information is not yet available.