Thoroughly analyze the expression of group interests and term thinking 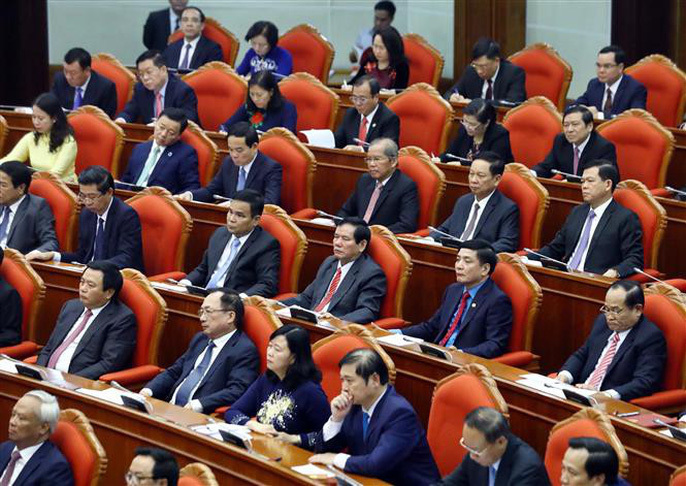 In order to ensure success at party congresses at all levels, the preparation and organization of congresses need to grasp some oriental perspectives in which the goals and ideals of national independence are closely related to society based on Marxism – Leninism, the thought of Ho Chi Minh …

Protect employees who dare to think, dare to make, dare to take responsibility

The Secretary General urged each party committee, party organization and party member to fully and fully understand the importance, role and importance of the meeting for good preparation and successful organization of the party congressional meeting. level.

"Every party committee, party organization and party member must determine the congress as an opportunity to regulate the team, strengthen discipline, discipline, improve courage, intelligence, democracy, creativity and responsibility, participate most effectively in Congress decisions, said the Secretary General.

The preparation of congresses must not affect other aspects of the work. In fact, some recent mandates show that there are some party committees that focus only on the congress, but have little leadership to carry out political tasks, do not fulfill the goals and tasks, even publications are not good for the next term.

On the contrary, there are still party ministries that pay more attention to the implementation of regular political tasks and overrun the preparation and organization of the congress, "the secretary general said.

Therefore, the Secretary-General has asked leadership and direction to avoid both of these trends.

In this context, we should continue to strengthen the building, to regulate the party, to tighten the discipline, discipline, the fight against corruption and effective anti-corruption; At the same time, creating an environment and favorable conditions for fostering innovation, it protects officials who dare to think, dare, dare to take responsibility for the common good.

The Secretary-General is required, right from the preparation of the congress, to actively and positively work on thought, creating unity in the whole party and consensus in the society.

"Experience has shown that the process of preparing the congress is also a time when the enemy forces, reactionaries and elements of the possibility, political dissatisfaction are thoroughly used for provoking, distorting and fiercely opposing both in terms of politics and human resources "the Secretary General concluded.

He stressed that the press and the authorities stepped up the fight against false accusations, disorders, hostilities and false, bad, poisonous, fabricated, wrongly presented information about social networks, the Internet, firmly defending the party's basis for thought, credibility and ways.

The organization of congresses must be practical, safe, economical, to avoid show, form, waste, to ensure solemnity and meaning, to create a good impression in the hearts of people and international friends.

Regarding the construction of political reports – congressional documents, the Secretary General said he must display the most concentrated vision, courage, intelligence, will, solidarity of party committees, party organizations, party members, and people.

The political report of the Congress is the intellectual crystallization, enthusiasm, responsibility, creativity, vision, party aspirations and the development orientation of the site, agencies and units …

"The assessment of law is always a difficult task, which requires a strong political character, scientific methods, a serious, honest, honest attitude of each party committee, party organization and head.", Stressed the Secretary General.

"The assessment of limitations and weaknesses must look directly into the truth, bravely face the reality, state the reasons, especially the subjective reasons, to give lessons to overcome solutions." A secretary is required.

In particular, a thorough analysis of new issues such as the implementation of land policies, the provision of traffic safety, corruption, waste, negative, social evils; manifestations of individualism, status of trumpet, local status, "group interests", "thinking of a mandate" …

Determination of the orientation, objectives, tasks and decisions for the next mandate, the Secretary General should have followed the innovative views and ideas of the Party and the actual situation of the site; at the same time, doing good in forecasting …

To do so, it must promote democracy, to gather the wisdom of the joint party committees and organizations; with respect we receive the comments and responsibilities of people from all walks, creating a unity between the will of the party and the hearts of people.

Regarding the Executive Committee's audit report, the Secretary-General should directly review the truth, clarify the truth, evaluate the truth, point out the pros, cons and reasons, promote self-criticism and criticism. Average, without respect, avoid.

The report looked at the leadership and direction of the party committee as a mirror that reflects the capacity and quality, will and action, thinking and way of working for party committees throughout the entire period.

Therefore, it is necessary to have a serious and objective attitude, to appreciate the advantages of promotion and strictly before any defect to overcome and repair. The review of the Party Committee must carefully monitor the working regulations, the results of the leadership for the implementation of the Party's resolutions, the direction of commissions at a higher level, and the specific situation of the sites, agencies and units. .

There is an expression "for politics, under countermeasures"

The Secretary-General stressed that self-criticism and criticism should be adhered to, and should not be avoided and avoided, as Uncle Ho said: "The party that hides its shortcomings is a corrupt party. The party has greed to recognize my shortcomings, they state these things, because of that defect, taking into account the circumstances in which the defect was born, and then asking for ways to correct it, is a strong, progressive party, bold, reliable, true. "

Over the past period, many committees have demonstrated a strong spirit, dare to think, dare to do, dare to take responsibility, actively seek out, create a clear change in many aspects, the material and spiritual life of People being elevated.

In addition, there is still a party committee that has not yet confirmed responsibility and leadership capacity and is passive; I look forward to relying on indifference to the hardships and inconveniences of people; show "hot and cold", "for politics, under countermeasures"; Despite the favorable conditions, favorable conditions, but not yet exploited, they did not fully play the potentials and advantages for socio-economic development, even negatively and violently violating the law.

The secretary general needs a report on the collective review to be linked to personal responsibility, to clarify the level of remedy and to correct defects and weaknesses, in particular the content that the competent authority suggests reviews or conclusions.

In order to direct party committees, the Secretary General and the State President have an important article "Prepare and well organize a party assembly at all levels of the 13th Congress of the National Party".