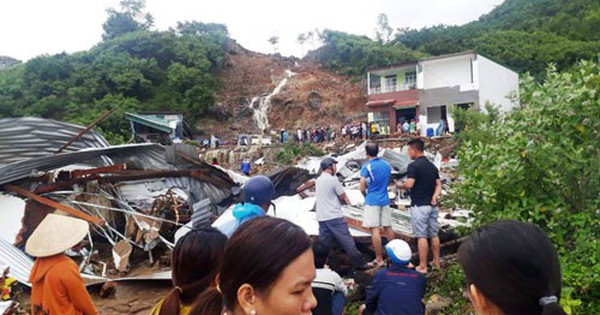 One Sunday morning there was no more peace for people in the mountains, the village of Thanh Phat, the municipality of Phuoc Dong, the city of Nha Trang, Khanh Hoa province.

At that time, the water from above was pouring like a waterfall pulling the ground. Having heard the rumble, she and many people open the door to see when the water falls, take the furniture home. For almost 10 years, she has never seen such a violent flood. At home, the water spills out the window. Everyone in the house is trembling, they think that this fen is difficult to survive, only knows how to become a divine blessing.

After 1 hour, the entire mountainous area with around 300 farms has completely sunk in the mud. Many houses have been crushed. The house is also intact, muddy, 20-30 cm thick. All resources are damaged by flood waters. "At noon, my family has nothing to eat, some money saved also floods," said Hoang, a mountain dweller settling in god.

Mr. Dang Loi, chairman of the People's Committee of the municipality of Phuoc Dong, said that only in the morning, heavy rain caused a part of the land from the hill to the spontaneous residential district of the village of Thanh Dat, causing 4 deaths in the place, many wounded. 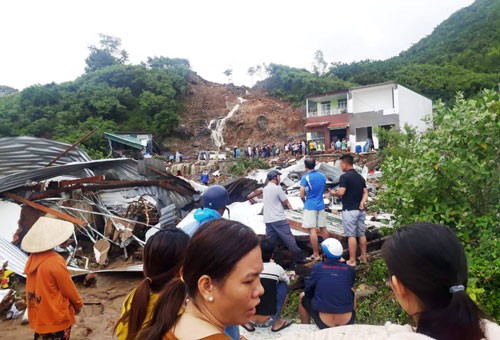 Only in heavy rain many people lost their relatives and homes

In group 1 – Hoa Tay, a branch of Vinh Hoa, on the same day, Mr. Tran Van Dong, chairman of the Vinh Hoa branch, is still on the spot, directing the search for Mr. Tran Hoang Phong missing in the ruined house. Mr. Phong's house broke down and his wife and two children died. More than 10 houses were damaged in this area.

Mrs. Ha (neighbor of Mr. Phong) said that about 6 hours, she was at home hearing variable water abnormally from behind the house. She hugged to the running area, just like a large water line completely collapsed the house. Sister and child avoid death narrowly.

On the same day, in the Tien Huyen restaurant (No. 14 Ton That Tung, Vinh Tho Ward), heavy rain caused the wall to collapse and the tourists from Dak Lak province with the staff and family members were overrun. Owner. Nguyen Thih Huyen (owner) and seven-year-old boy Huy (in a delegation) were buried and killed. Nguyen Khoa Khoa, who escaped death, said the boy died a son of a teacher in a delegation. He has about 30 teachers from the district of Ea H & # 39; leo, from Dak Lak province to Nha Trang on the occasion of 20-11. The incident left 4 other people in the wounded group.

In Group 2 – Truong Son, in the district of Vinh Truong, there were also landslides caused by three dead. According to preliminary statistics of municipalities, branches, Nha Trang, by night 18-11, killed 13 people, one is missing.

Breaking the tank into a mountain pool

In the municipality of Phuoc Dong, as soon as information was received, the army, police and civil defense forces were present to clean up the place, find people under rubble. At the end of the afternoon, functional forces were still looking for missing people and helping people to get out of danger. Colonel Nguyen Xuan Canh – head of the Police and Fire Rescue Department in Khanh Hoa province said that heavy rains and flood waters make exploration difficult.

Mr. Dang Loi said that the mountainous area is workers, hired workers. People are building their own homes here. In previous storms, the commune asked people to move. "This morning, the rain was so great, so unexpected!" Rainwater from the source down to create a flood – said Loi.

Mr. Tran Van Dong said: "For decades, rainstorms, what kind of people in the West do not have, the incident occurred because of the reservoir of artificial water in the luxurious housing estate in Hoang Phu. In the mountains, the lake is used to create pools, but when the rain is heavy the lake can not swim and the water falls so fast that 10 houses have damaged their homes. Mr. Feng is missing.

The Prime Minister on 18-11 had a message focusing on dealing with the consequences of typhoon No. 8.

The Prime Minister expressed sincere condolences to relatives of the dead, sharing the hardships and losses of people and local authorities.

In the coming days, floods may be complicated and high risk of landslides, floods, violent floods and floods in the southern central provinces. The prime minister is demanding the Khanh Hoa People Committee and other localities to manage the reaction and quickly overcome the effects of rain and floods; Arranging searches for missing persons, repairing the injured; support for accommodation, food, food, and not hungry people …

Precipitation is above the forecast

Vo Anh Kiet, deputy director of the South-Central Meteorological and Hydrological Station in Nha Trang, said the rain was unpredictable. From 18:00 to 21:00 on 18 November the total rainfall was up to 235 mm.

In the afternoon of November 18, the Nha Trang People's Committee has urgent departments, instructed the district and the municipality to identify the address and address to report to the provincial People's Committee; Quickly review critical areas threatened by landslides that affect people and take drastic steps to remove people from dangerous areas. It requires strength to maintain available support and rescue operations.