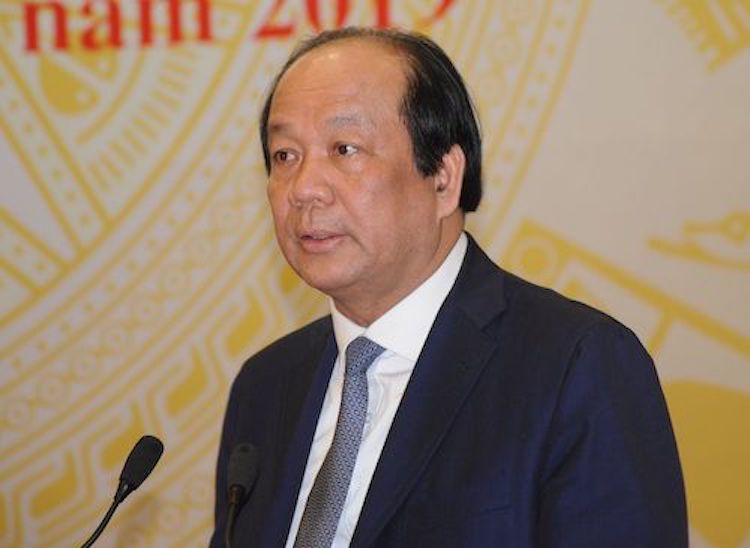 A government spokesman said the circular 08 that prescribes an inspection of the imported waste from the Ministry of Natural Resources and Environment is a "document for emotion for enterprises".

Referring to the problem of tens of thousands of waste containers imported into the ports that caused losses for businesses, at a government press conference in the afternoon of January 31, Minister of Government Office May Tien Dung said that "issuing documents the Inspection Rules of the Ministry for natural resources and the environment in circular 08, 09 are insensitive to enterprises. "

Mr. Doug said the bin must be inspected and processed by 4 units. The first is the Department of Natural Resources and the Environment for the granting of conditions; through inspection agencies; and then through an independent inspection agency (currently 13 agencies), must finally go through the State Agency at the place where the company has facilities and factories.

Inspection in one place, the factory at one place and the port elsewhere makes business more difficult, generating more costs. For example, if the Department of Natural Resources and Environment sent officers to check each container at the Cat Lai port, the company must arrange transportation and accommodation. In addition to the costs, the inspection time of the Department of Natural Resources amounts to 80-90% of the time for the approval of goods. While customs require only paper for natural resources and for environment, for customs clearance.

With more than 24,000 containers in ports in ports, it will be very good if it gets rid of, as most businesses own small and medium enterprises and need production material. "Issuing administrative procedures, but not evaluating the full impact, thorough consideration of accidentally killed businesses," Dung said.

A government spokesman said many businesses are reflected in the government office, meet directly with Prime Minister Nguyen Xuang Fuk and "cry before the Prime Minister over the administrative regulations" for "them".

Mr. Dung asked the Ministry of Natural Resources and Environment "to accept mistakes with the companies when they issued administrative documents that led them to shed tears, because it was too difficult."

Echoing the Prime Minister's lead at the government's meeting, Minister May Tien Dung stressed that the Prime Minister asked the Ministry of Natural Resources and Environment not to designate local departments for granting permission for import of waste and a request for cancellation. remove circulars 08 and 09 of this agency.

"The prime minister wants a thorough handling of this issue, otherwise nobody will eat" Tet this Tet, "he noted.

In response to this question, Deputy Minister of Natural Resources and Environment Le Kong Tah said that the provisions of Circulars 08 and 09 are designed to strictly implement the direction and direction of restricting the import of waste, in the Context of neighboring countries there stringent waste import policies. These two circulars fulfilled the improvements of regulations and regulations for the import of residues in a more stringent way of protecting the environment for the country.

However, he acknowledged that Mr Tah, a series of legal documents implementing the Law on Environmental Protection and Customs Law "are accidentally overlapping, are difficult to apply to local units, as well as due to the way the implementation of a number of divisions for natural resources and life the environment was not really close and creative to reduce the timing of shipments. "

He said the prime minister's working group has drastically targeted, in the forthcoming period, it will amend the state inspection regulations for the quality of imported waste in order to strengthen the post-inspection responsibilities of the agencies. in the site, rather than prior checking. The clearance will be based on the conformity assessment certificate of the independent assessment organizations.

"From this we find that the assessment of the impact of legal documents in areas that need to be made deeper, problem solving and the sensitivity of changing regulations should be joined by the hands of related agencies," said Mr Le Cong Thanh.