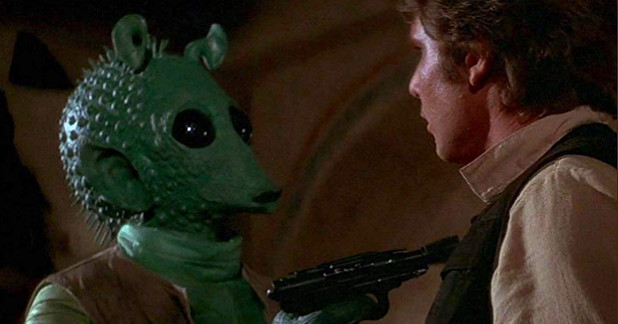 Amidst a huge catalog of new TV shows, old movies and live remake of classic films, Disney +'s most trophy thing is perhaps the most controversial scene of all. Star Wars: Confrontation and shootout of Jean Solo with the Grado Hunter in the first film.

The fuel question at the heart of the debate: Did Jean Solo shoot Gredo first?

It's a notorious reputation, one of many that franchise creator Lucas has made over the years. Disney + now offers yet another scene to the subscribers' surprise: Grado, an insect-like human being known as Rodian, now also says something before he and Jan both shoot explosive footage. What he is saying is unfounded, unlike his previous dialogue, but many viewers say it sounds like stupid nonsense: "McLankey."

Disney told Wox's sister, Verge, that George Lucas himself had been editing the scene "before. [Lucasfilms’] The acquisition of Disney. "However, this is the first time that fans have seen this change, and there have been shock waves of confusion and fun.

By itself, the stage and the scout are nothing more than a little nonsense. But in light of Lucas's earlier changes, whoever made Solo less guilty, the edits had a sort of Streisand effect on the stage in making it more relevant, more talked about and more integral to the Star Wars canon than originally intended.

The scene of "Jan Shot First" takes place in Episode IV. In the Moss Aisle bin, Gredo confronts Solo, saying he was hired by Utah Fata to take him to Solo because Solo lost some of the baaab's cargo. They exchange words, with Greedo saying that Solo can't handle the warmth of the short Rodian.

The shots are fired, and depending on which version you have in front of you, the sequence of those shots changes.

In the original theatrical cut in 1977, Jan appears for the first time shooting, killing Gredo immediately. (It's as cool as Solo proves to be during the film.) In the 1997 version, a special issue commemorating 20 years of Star WarsLucas changed the scene to fire Grado for the first time, suggesting that Solo was not in a hurry to get out, as otherwise we were made to believe. Then, in 2004, the scene was re-edited to have both shoots at the same time. Here's a comparison between the 1977 version and the 2004 stage version:

And now, at Disney +, we call Grado "McLankey" before trying to kill Solo.

The various editions emphasize two things: the morality of Jean Solo and his threshold for lethal violence. Each of the changes makes the killing of Solo the Solo, an act of revenge or self-defense. Lucas said the changes were made to maintain Solo's heroism:

"The controversy over who fired the first shot, Gredo or Jan Solo, at Episode IVWhat I did was try to clear up the confusion, but it obviously upset people because they wanted Solo to be a cold-blooded killer, but he really wasn't, "Lucas told the Hollywood Reporter in 2012." It was done. in all circles and confused who was doing what to whom. I put a slightly wider shot out there that made it clear that Gredo was the one who shot first, but everyone wanted to think that Jean had shot first, because they wanted to think he actually just shot him. "

While your mileage may vary depending on how much you believe in Lucas when he says it was clear that Grado shot first in the original theatrical version, and Solo's shooting is primarily a matter of stage and confusion, his intention to shoot Solo comes through the edits.

Lucas believes that Solo does not kill provocation and Solo does not kill innocent people. Solo shooting someone dead before attempting his life would be similar to Batman, Superman or Judo by a woman who breaks their morality to never kill. This change allows Solo to remain a hero and not complicate his eventual stories with a good man, such as marrying Leia.

"Not a single Star Wars fan has ever thought or wanted Jean Solo to be a" cold-blooded killer. ". "A cold killer is going to kill someone he knew or was at least considered unarmed when that person posed no threat to them … Jan simply puts down Gredo and kills him before he can carry out his plan. Who, other than Lucas, obviously – would think he was "cold-blooded?"

That remains an argument, but Lucas does not back down. The brash solution that introduces this new arrangement is the mysterious battle cry that Gredo calls before it ends. It is the funniest thing ever to happen with "Jan fired first", and perhaps the healthiest change ever made. McLankey, or whatever Grado has been saying, has since become a joke among fans who consider the word to be one of the most bizarre franchises of Lucas Lucas in the franchise.

Whenever McLunkey isn't on the screen, all the other characters have to ask, "Where's McLunkey?"

Unfortunately for Gredo, no matter how many times this scene is edited, it always ends up fulfilling its timely end – provoked or not.