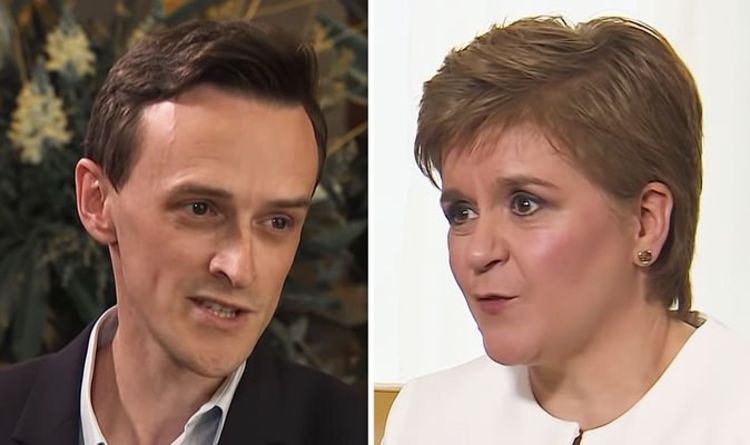 Nikola Stuđon earlier this week announced his latest offer to prepare for a second referendum on Scottish independence before Brescot become official to keep independent Scotland in the European Union. The SNP's independence plans also include the creation of a new Scottish currency that will be adopted instead of the pound, but Channel 4 News correspondent, Siraran Jenkins, pointed to a key shortcoming in Mrs Strandhon's plan. Addressing the first minister on Friday, Mr Jenkins said: "Your position is that Scotland will have to devote itself to joining the euro, but that does not always have to do it, is it so?"

Ms Sturgen did not deny the proposal, but tried to counter the insistence of other EU member states like Sweden to join the bloc without committing to take over the euro as part of the deal.

Mr Jenkins, however, rebuked the first minister: "You are quite right, Sweden is not in the eurozone and it does not intend to join in soon, but they have pledged to join the euro"

"Like the Czech Republic, Hungary, Poland, Romania, Bulgaria and Croatia, none of them in the euro.

"All of them have pledged to join the euro. For the sake of clarity, so that people will understand, they will commit to joining the euro, but you do not intend to do it?"

As Mrs Sturgeon responded by insisting that Scotland will be able to hold negotiations on the issue with Brussels, Jenkins added: "These are the rules, the first minister.

"You seem not ready to say that. For some reason, maybe you think it's politically toxic to do it?" Then say that. "

The SNP leader suggested that the reporter and his network "got this a little wrong in the recent past" and continue to claim that independent Scotland can become a member of the European Union without having to join the common currency.

"Jean-Claude Juncker is on record saying that it is not EU business to force any country into the euro. This argument that Scotland should somehow be in the euro simply does not give any control.

"We will discuss with the European Union the basis of independent membership in Scotland."

Ms Sturgeon has long supported plans for a new Scottish independence referendum and claims that Scotland should be allowed to vote again for membership in the UK before becoming official to Brescia.

The first minister confirmed his opinion that the new voice would be the answer to the "nationalism and borders" that Breschit represented.

Teresa May has repeatedly rejected requests for a second vote on Scotland's independence after Scotland decided to remain part of Britain in 2014.

In March, a poll conducted by pro-independence group Progress Scotland found three-fifths (63 percent) of 2,041 adult respondents saying that Scotland would be an independent country in the future.

The European Commission has warned that Scotland will first have to give up the United Kingdom and the EU before re-applying for membership.

The commission, the EU executive, said it would stand up with previous promises of the so-called Prodi Doctrine.

The 2004 document, named after former Commission President Romano Prodi, states that the breakaway state will have to leave the Union and then be able to return only if it obtains independence in accordance with the constitutional law in the Member State that leaves it.