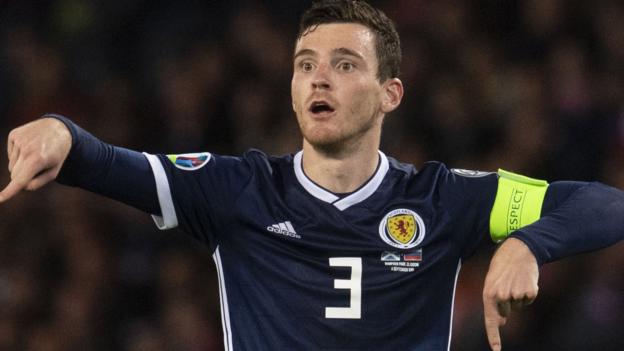 Captain Andy Robertson is among a trio of Premier League players to pull out of Scotland's injured squad for the upcoming Euro 2020 qualifiers with Cyprus and Kazakhstan.

Midfielders Lewis Morgan and Grammy Ginny have been added to the squad.

Robertson, who delivered a cross for Liverpool's second goal in a 3-1 win over Manchester City on Sunday, will stay with Scotland's Scott Stark for a few days but will not travel to Cyprus for Saturday's match.

McTomain was played during Manchester United's 3-1 weekend win over Brighton and Hove Albion, while Fraser played all 90 minutes of Bournemouth's 2-1 defeat at Newcastle United.

Celtic coach Morgan is despite only making three appearances for the club since August, while Ginny impressed at Derby County last month.

Scotland face Kirpus in Nicosia on Saturday, before ending their Group I campaign on Tuesday at home in Kazakhstan.

Clark's players may not qualify from the group but have had a playoff semi-final in March against their opponent yet to be finalized.