North Korea's mega-bomb raises the mountain out of the country 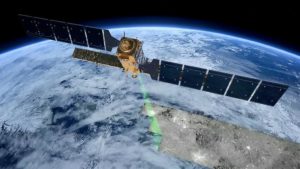 North Korea has lifted an entire mountain a few meters from the ground with a mega-powerful hydrogen bomb, scientists say.

The blast was seventeen times more powerful than the atomic bomb that destroyed the Japanese city of Hiroshima in World War II.

It not only sent the mountain flying upwards, it moved it sideways for more than a foot (half a meter).

The space radar (above) showed the explosion of nuclear testing in buns in the mountain northwest also created a crater 433 meters (132 meters) wide.

The blast two years ago was the last of six that North Korea carried out in a system of tunnels dug deep beneath Mount Montap.

The site is about 230 miles north-east of Pyongyang and is believed to be the North's main nuclear facility – the only active nuclear testing site in the world.

This is the first time satellite data has been used to measure the power of the bomb tests it conducts.

Reporting the findings to Geophysical Journal International, researchers say: The latest test has moved the country by several meters.

"We estimate that it is equivalent to 17 times the size of the bomb dropped on Hiroshima in 1945."

Dr. Straight added: rad Satellite radars are very powerful tools for measuring changes in the surface of the earth and allow us to estimate the location and yield of underground nuclear tests.