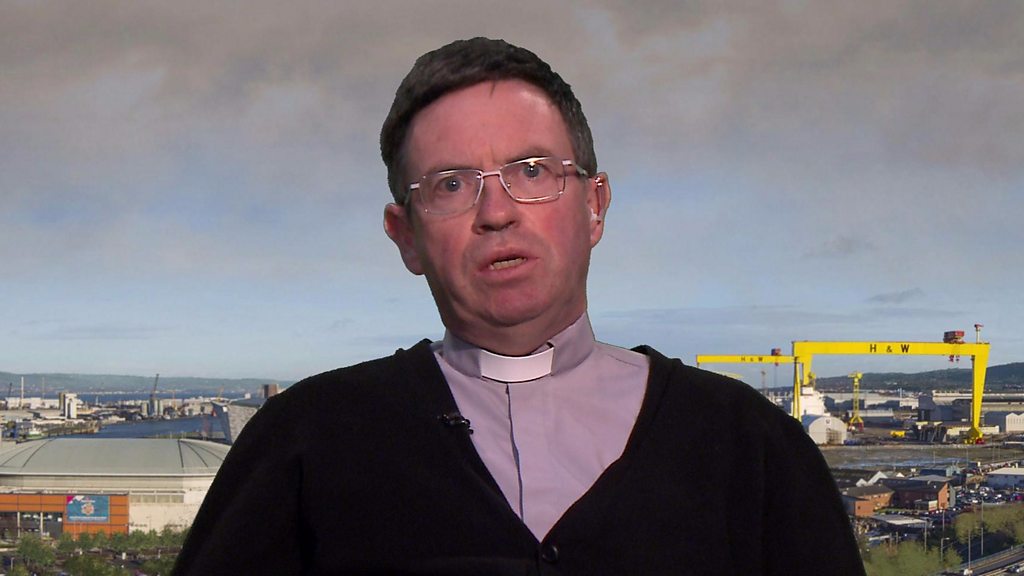 The priest who criticized politicians at the funeral of Lira Mekki, said that people in the church were pressuring them to join the ovations.

Father Martin Magilus was applauded when asked why he took the journalist's death to join the politicians.

He told the BBC he believes people in Northern Ireland now want more movements than politicians, so the latest Stormont returns can succeed.

In an interview recorded for the Andrew Mar program Sunday, Father Magil said politicians slowly stopped when his words were applauded at St. Anna's Cathedral in Belfast.

"People, in a sense, really push in the cathedral to stand," said the priest.

"Obviously the politicians realized:" Oh, goodness, everyone behind us, we need to move, "and literally moved because people have moved.

"To some extent it's almost a metaphor – I get the feeling that people want our politicians to move, and they want to move now.

"With that I mean in terms of entering those conversations and in a way that will bring a positive result to the end of them."

During the funeral service, Father Magilus praised the political leaders of Northern Ireland for "standing together" in the Krieggan area in Londonderry on Good Friday to attend a vigil for Ms. McKee.

However, he then added: "Why does not the death of a 29-year-old woman with her whole life before her in the name of God take her to reach this point?"

The words of Maggie's father appeared all over the world, according to Northern Ireland State Secretary Karen Bradley.

She acknowledged her influence after announcing the date for a new round of all party talks to be announced in order to restore the government to split Stramont's power.

Negotiations should begin on May 7th.

Northern Ireland has been without devolution for more than two years after bitter breaks have been made between coalition partners The Party of Democratic Unionist Party (DUP) and Sinn Fein.

Sin Fein stepped back from the coalition in the height of financial controversy over dealing with the DUP with the green energy scheme.

Since then, both sides have been involved in several failed negotiating rounds, but have not been able to compromise on a number of issues, including an Irish act and the legalization of same-sex marriages.

The interview of the Father Magilus will be aired as part of the Andrey Mar's show the BBC one at 09:00 BST on Sunday, April 28.