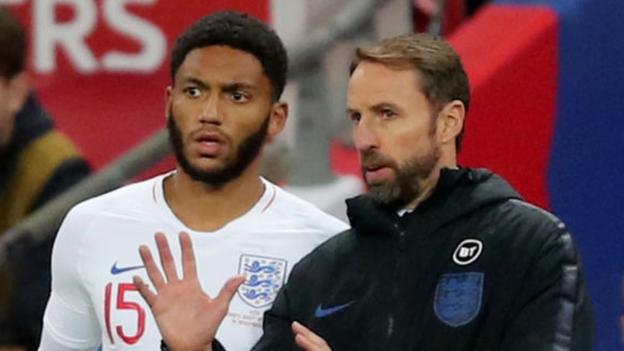 England striker Raheem Sterling has said it was wrong for fans to defend Joe Gomez when he emerged as a replacement in the 7-0 Euro 2020 quarter-final win against Montenegro at Wembley on Thursday.

Manchester City's Sterling was knocked out of the game after clashing with Liverpool defender Gomez on Monday.

Sterling was seen applauding Gomez when he appeared on the Dragons sound.

"It was hard for me to see my colleague cry about something that was my fault," Sterling tweet.

"Haso done nothing wrong and for me to see someone holding his head down and working hard, especially after a difficult week for him, to argue when he appeared tonight was wrong.

"I took full responsibility and accepted the consequence."

"No England player should argue with that"

The row between Sterling and Gomez came to the English camp one day after the pair were involved in a field dispute during Liverpool's 3-1 defeat to Manchester City at Anfield on Sunday.

Sterling has since apologized for his actions and England boss Gareth Southgate has confirmed he will start the final qualifying match at Kosovo's Euro 2020.

Southgate said he was sad to see the reaction to Gomez's introduction in the second half against Montenegro.

"Hado done nothing wrong and no England player should be taken advantage of when they wear the shirt.

"All players are particularly disappointed with that."

England's night of celebration – their 1,000th match with the Euro 2020 qualifier since Montenegro was defeated – was marred by Gomez's tricky jogging.

It was the unfortunate prolonged fall of the confrontation between the talented Liverpool defender and Sterling at Manchester City in a private area of ​​St George's Park when England's squad gathered on Monday, the day after they clashed when the teams met at Anfield.

By all accounts it is suggested that Gomez is an innocent party, effectively confirmed when Sterling tweeted in defense after the match in response to the hostile reception he received when he was introduced as a 70-minute substitute.

Some English supporters heard a strange miracle, though Sterling was actually on the big Wembley screens, applauding as Gomez prepared to enter.

It was pointless, unjustified and totally unworthy and rightly condemned by both Southgate and Sterling, who accepted full responsibility for the incident in what was an exemplary response to his. That he was the main offender in the glittering should have been clear from his decision to exclude him from the game as a disciplinary measure.

Gomez deserves better than the shockingly bad treatment he received from some Wembley England fans. It gave nothing to those in charge and was an incident that disappointed Southgate and upset Gomez's teammates.

How sad that this took away the glitter that was supposed to be a gala occasion for England and the Football Association. Let's hope the strong words from Southgate and Sterling do not guarantee repetition.