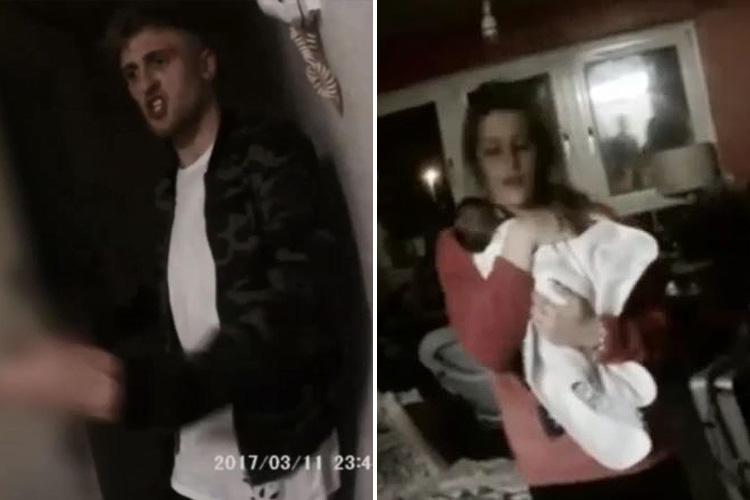 VIDEO emerged from moments of embarrassing moments that arrived at the door of the new mother and her former boyfriend just days before the baby died.

Roxanne Davies (30) and Samuel Davis (24) were convicted today of causing or allowing the death of the baby Stanley in the Crown Court in Winchester.

The 24-day baby died in hospital on March 28, 2017 after suffering from a fracture of the skull and brain bleeding.

The newborns were admitted to the hospital "Queen Alexandra" in Portsmouth for 32 fractures on the rib and nine more on the arms and legs on three previous occasions.

Just 17 days before Stanley's death – when she was a week old – the police came to the couple's apartment after neighbors reported shouting.

Davis claims he argued with a friend for borrowing money, instead of Davis.

She supported her request to the police and explained that she had mental health problems and was not allowed to work.

Davis claims that Davis, who was not the father of a newborn child, "just started doing so" to the police, adding that he smoked cannabis and drank alcohol.

He was positive for both substances after Stanley's death.

The policemen asked to see him inside the apartment when they visited the couple on March 11, but the two defendants insisted that there was only an argument with one of Davis's friends for some money borrowed.

Davies answered the door and Davis was then seen holding a small little Stanley baby in her hands.

She told the police officer who filmed the exchange of his body camera that her boyfriend was suffering from mental health problems.

Davis me | he does not get out of the apartment in time and says: "I do not want police at my door" and complains that "they have no warrant".

She says: "He is normal, but he starts like this, he is allowed to be not allowed to work."

The clerk asks: "Can we see that he takes cannabis or something like that tonight?"

Davis answered: "He smokes cannabis, yes, he drank, he is out with his friends."

She tells them: "Now I have a baby," to which the official replies: "I know, congratulations. Since you were the last time I was very pregnant, I met you" – confirming that he had previously visited the couple.

When the verdict was read in court today, Davis shook his head.

Davis broke up and cried "killer", prompting Judge Jane Miller to call her CC to be quiet.

After the couple was told that they would be returned to custody until the sentence was pronounced on December 7, Davies exclaimed: "You're wrong, Sam just tell them to do it."

She continued: "We thank you very much the killer."

Judge Miller said: "Both of them will be detained in custody, I can not be accused of any of them being bailed."

The court heard that the former couple, who was not married but shared similar surnames, had a difficult relationship with the police who were summoned to the property on March 13 by neighbors who reported shouting from their apartment.

The two defendants tested positive for cocaine and cannabis after their arrest after Stanley was taken to hospital.

The first sign that Stanley suffered some damage was when a healthcare visitor found a bruise behind his right ear.

Davis told the court that Stanley took care of herself and her defendant and her family and added: "That second baby baby was handed over as a parcel."

MONITORING OF THE DEATH OF THAT: "His short life was tormented by pain and suffering"

The NSPCC responded to a terrible case today.

A spokeswoman said: "The circumstances surrounding the death of the baby Stanley are tragic and disturbing.

"His short life was tormented by pain and suffering, caused by many people who were to love him and to protect him from evil.

"Babies and young children are totally dependent on those who care about them and we all have an obligation to look after their well-being."

The previous day, March 15, Davis photographed an article in the Sun newspaper about the mother who took her dead baby on a bus to avoid detection over the death of the child from a head injury.

The court also heard that Davis posted a video on Facebook on March 20 – a day before Stanley was taken to hospital, severely ill – at Stanley Fitting, along with the comment: "My baby is 16 days to do it already."

The boy died a week later.

Giving evidence, Davis told the court that when her son was born, she was "above the moon" and added: "I had all my world in my hands."

Karl Anderson, from the CPC, said: "During post-natal appointments and examinations, Davis and Davis gave the medical staff the impression that there was no problem with Stanley and only reported difficulties to take the milk.

"The reality was quite different." Both knew Stanley had suffered serious injuries, but he did not say anything, leaving Stanley without the medical attention he desperately needed.

"And the defendants denied that they had killed Stanley, but from all the evidence it was clear that one of them had caused the terrible injury to the head he had killed.

"The other was, or should have been aware, that there is a risk of serious damage to Stanley because of the multiple fractures he had previously suffered, but instead of doing something to prevent something going on, they did nothing.

Dad, 29, "beat and squeezed a newborn daughter to death to avoid changing diaper"

DO NOT BE HARRY

Girl (13), charged with "assault" after throwing a Haribo sweet to the teacher

My mom threatens to ex, because they are sent because of the death of a 3-year-old baby

DRINKS INTO THE BLOOD

Boy, 16, "the skull of a broken girl with a hammer before having sex with a corpse"

"The bully who occupied the Syrian boy," who was taken away from his home by vigilantes while he was accused

"Bully", who "a poor Syrian boy" accuses the FAITH that he is not racist

"Our thoughts are with members of Stanley's wider family who have lost a child in such terrible circumstances."

Derek Benson, chairman of the Child Protection Board of Hampshire, confirmed after the trial that authorities are conducting childcare checks.

He said: "I can confirm that an independent review regarding this case has been ordered and a report will be released in due course on the outcome, along with any recommendations for improvements in future practice, when this work is over."