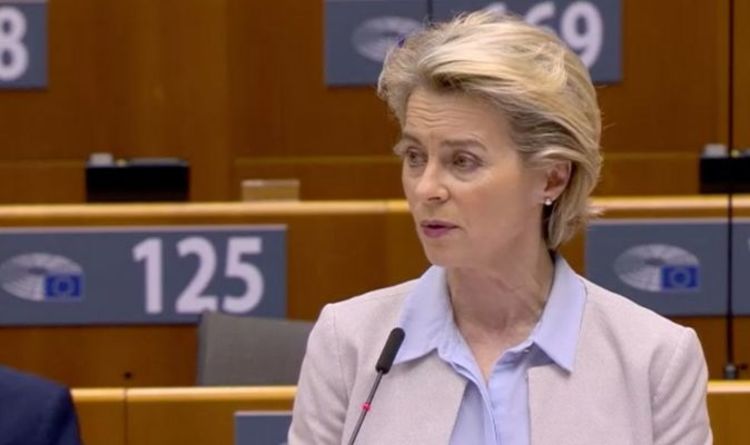 The top Eurocrat said disputes over future common standards continued, including state aid rules and policing on the final deal. Raising hopes for an agreement, she told the European Parliament that many areas of the draft free trade agreement were beginning to emerge. Ms von der Layen said: “These are crucial days for our negotiations with the United Kingdom. “But honestly, I can not tell you today whether, in the end, there will be an agreement.”

She said there had been “real progress” but not enough to make significant progress in the dispute between Michel Barnier and Lord Frost.

“There are still three issues that can distinguish between a deal and a no-deal,” she added.

“The key topics for the European side are, of course, issues related to equal conditions, governance and fishing.

“With very little time ahead of us, we will do everything in our power to reach an agreement, we are ready to be creative.”

Negotiators were forced to do their job online this week following the emergence of a coronavirus in the EU team.

Michel Barnier is expected to travel to London for talks with his UK counterpart on Friday.

Ms von der Layen insisted that her chief negotiator would not make concessions that would harm the interests of EU fishermen and the bloc’s single market.

She said: “We are not ready to question the integrity of the single market, the main protection for European prosperity and wealth.”

She added: “No one is questioning Britain’s sovereignty over its waters. “But we are looking for predictability and guarantees for the fishermen and fishermen who have sailed in these waters for decades, if not centuries.”

Following growing calls from EU leaders to step up preparations for Brexit without a deal, Ms von der Layen insisted the bloc would be ready if trade talks failed.

She said: “The next phase will be decisive. The European Union is well prepared for a no-deal scenario. But, of course, we prefer to have an agreement.

“I fully believe in the skillful handling of our chief negotiator, Michel Barnier. “But one thing is clear, regardless of the outcome, there must be, and there will be, a clear distinction between being a full member of the Union and just being a valued partner.”

Ms von der Leyen turned to MEPs for help in reaching any agreement on Brexit following numerous complaints about delays.

The EU parliament is now due to hold an emergency vote on December 28 to ratify any trade agreement.

She said: “I am fully aware of the challenges posed by the current situation, especially for the Parliament and the ratification process.

“And therefore I sincerely thank you for your support and understanding. “As in the past, we will go, the last miles together.”