Archie Bruce: Batley Bulldogs player was 'young fella with world at his feet' 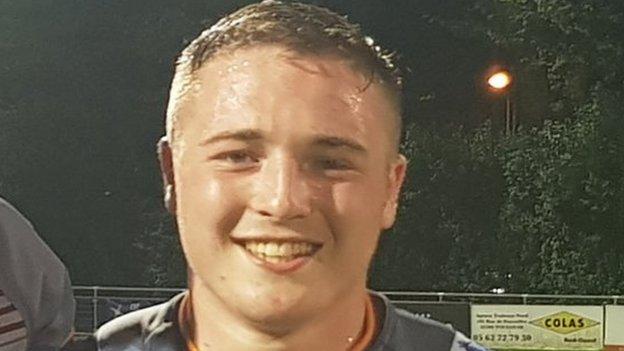 Batley Bulldogs scrumhalf Archie Bruce has been described as a "young fella with the world at his feet".

Bruce, 20, was found dead in his hotel room on Sunday morning after making his debut for the Championship side at Toulouse on Saturday night.

Batley director John Miller said Bruce was "really giddy and happy with himself after the game and very proud."

"Then this morning he's just not here and it's hard to get your head around," he told BBC Radio Leeds.

He added: "He was an infectious young fella, polite, smart, funny and a little bit cheeky. His enthusiasm was fantastic. A young fella with the world at his feet."

Inquiries are being conducted in France and some of the club's players and staff have delayed their return home.

Bruce came on in the second half of the 46-0 defeat.

"He was too excited and he kept running to the loo, he was getting that giddy. He was just keen to go on," added Miller.

"But obviously he was focused on the game as well and when he came up against a real high quality Toulouse side, he looked the part in the 30 minutes. He just showed the promise that we knew he had."

The Rugby Football League Benevolent Fund has created a Just Giving page in Bruce's name and has raised almost £ 2,000 so far.

Bruce had joined the Bulldogs from amateur club Dewsbury Moor in West Yorkshire, where he had played since joining their under-eight side.

Batley said Bruce was training with the Bulldogs for the 2019 season with a view to the 2020 campaign, but was handed his debut by head coach Matt Diskin "because of his energy and enthusiasm."

The club said: "Playing the final 30 minutes of the game he made a great impact with darting runs, and his excitement was clear for everyone to see post match.

"A smart, polite, funny and extremely capable young man, his death is an absolute tragedy."