2019 General Elections: Brexit Party will not stand for Tory seats 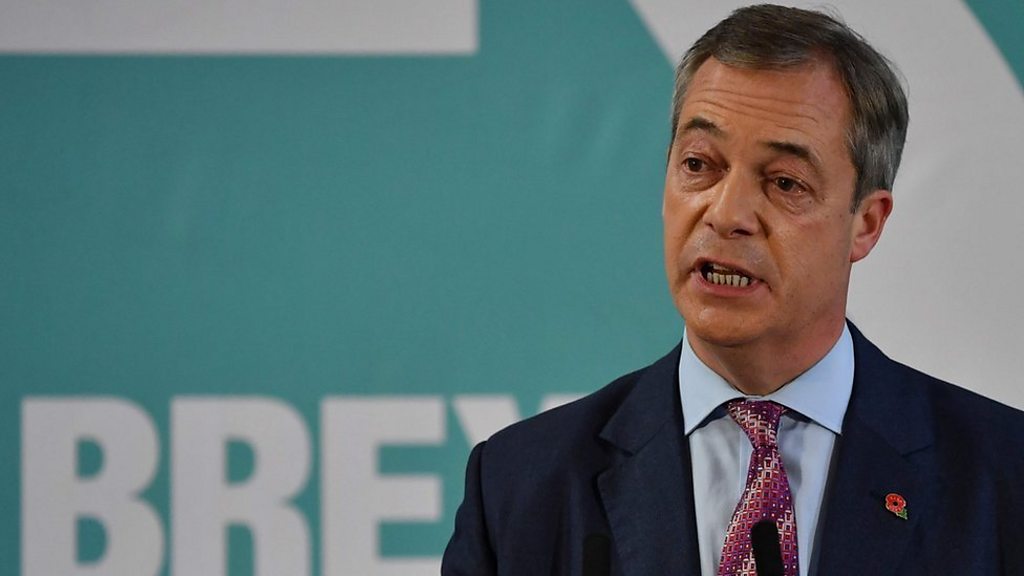 The Brexit party has announced that it will not stand for the 317 candidates that the Conservatives won in the 2017 general election.

Party leader Nigel Farage said that permanent candidates across the country could increase the chances of a new EU referendum.

But he said the party will stand up against all other parties – and focus on taking the seats.

He has pledged to stand for more than 600 candidates. Commons has 650 seats.

Prime Minister Boris Nonsson has welcomed the move, calling it "a recognition that there is only one way to do Brexit, that is to vote for the Conservatives."

But Tory President James Umen added that there was still a "danger" the Brexit party could split the vote, which led to the election of lawmakers who could "frustrate the Brexit process".

Explaining his decision to supporters in Hartlepool, Farage said Mr Johnson had recently signaled a "major change of position" in his approach to Brexit.

He cited the prime minister's pledge not to extend the transition period following Britain's departure from the EU. This will see the UK abide by EU rules on issues such as freedom of movement until December 2020.

He added that this was a "huge change" from the kind of trade pact planned under former Prime Minister Theresa May.

Labor leader Ian Lavery called on voters to "reject this act of respect for Tuckerite in the 1980s, which will lead to more savage Tory attacks on working-class communities."

Mr Farage had earlier offered not to stand against the Tory candidates in certain places if the prime minister changed aspects of his Brexit deal.

But the proposal was rejected by Boris Johansson, who said deals with "any other party" would "run the risk of putting Corey's number 10".

Mr Farage said he had "sincerely tried" to create the so-called "green light". "Leave alliance" with the Tories, but his efforts went nowhere.

"In a sense we now have an Alliance Leave, that's just what we did unilaterally," he added.

Mr Farage has already confirmed that he will not stand for election, saying he wants to concentrate on helping his party's candidates.

The Brexit party's decision to stand aside in the constituencies won by the Conservatives in 2017 should make it easier to maintain those seats.

In margins like St. Yves and Mansfield, it should help them maintain a larger share of the Pro-Leave vote.

However, to win a majority in the House of Commons, conservatives need to win more seats – not just stick to what they have.

And in those places the presence of the Brexit party candidate can be obtained in the manner of the Conservatives.

The best estimates suggest that 29 of the Conservatives' top 50 goals and 59 of the top 100 are in the Labor seats that voted Leave in the referendum.

If the strategy is to target Leave voters in those places, it would probably be better to have a clear flow – without the Brexit party.

Brexit party MEP Ann Videcombe said Farage had gone "a very, very long way" by ruling out the possibility of standing in the Tory-winning seats in the last election.

She added: "You can't really expect that we won't get the job done, and we have and any consequences that come down to Boris's stubbornness."

She added that the defeat of the Tories in Scotland "would help to deprive Boris nonson's growing far-right and far-right party of the majority they want".

Anti-Brexit parties Plaid Shimrou, the Green Party and the Liberal Democrats have agreed not to stand at each other in 60 seats across England and Wales.

Their pact means that, in Wales, two of the parties will agree not to run for a candidate, increasing the chances of a third candidate getting the rest of the vote.

In England, it would simply be a two-way deal between Lib Dems and the Greens.