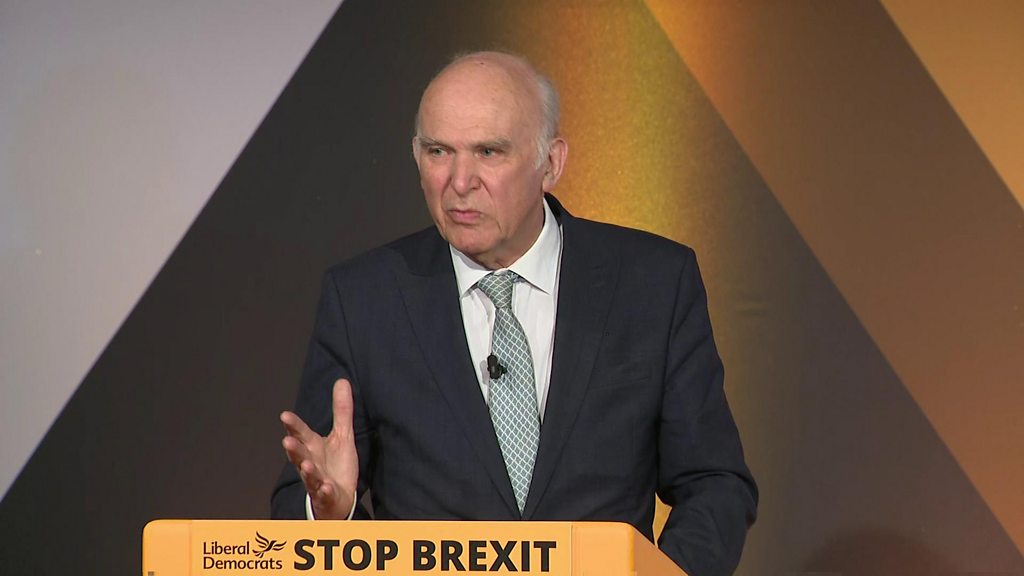 The Liberal Democrats launched their European election campaign with an "unambiguous" commitment to stop Brexyth.

Leader Sir Vince Cable accused the Conservatives and Labor of "stitching" and said "voting on the people" is the only way to put an end to "Brexit's paralysis."

He added that it was "sad" that the member of the "Change of Britain" party, Britain, did not agree to run a combined campaign.

Britain should leave the EU on October 31st after Brescot was delayed due to a continuing parliamentary stalemate.

That means the UK must now hold the European elections on May 23rd or leave on June 1st without a deal.

But if an agreement can be reached between lawmakers before 22 May, the UK could cancel its participation in European parliamentary elections.

However, inter-party talks aimed at reaching consensus have yet to make significant progress.

Speaking in Wapping, east London, Sir Vince said his "exit from the phrase" Brexit "was considered" a little strange "when he first used it in July 2017, but was now" mainstream ".

He compared the party's position with Brexit to oppose the invasion of Iraq in 2003 – backed by conservatives and labor at the time.

"At that time, we were considered a limb exit, non-patriotic – and we were justified, we were proved right, and therefore I believe that we will have the right in Europe."

But he said he regretted that the Liberal Democrats did not stand on a common platform with other parties that supported Brekit.

"The Liberal Democrats have clearly shown that we are happy to cooperate with others. It was not reciprocal and we are going our own way."

He described leakage reports on the document that suggests that the newly formed United Kingdom will try to "win" Liberal Democrat supporters as "unhappy".

Chris Leslie, a former Labor MP who withdrew from the party to join Change UK, told The Business Insider that the alliance between the anti-Brexian parties "was never on the agenda", adding: "They [the Lib Dems] they fell under a critical mass and had no desire to get out of it for a long time. We are starting again and we do not come with that luggage. "

Asked about the interview, Sir Vince said: "There are millions of people who want to work together and they will feel angry and betrayed if they think they are tiny tribal people – it's old politics."

He said he expects the party to do good, but added: "It's a pity and regret that we do not make a combined campaign."

In late March, Prime Minister Theresa May said the public would be "unacceptable" if they had to choose a new group of 72 lawmakers nearly three years after voting for the EU's abandonment.

But earlier this month, she agreed to Breckett's delay by October 31st with the EU, with an opportunity to leave earlier if her withdrawal agreement was approved by Parliament.