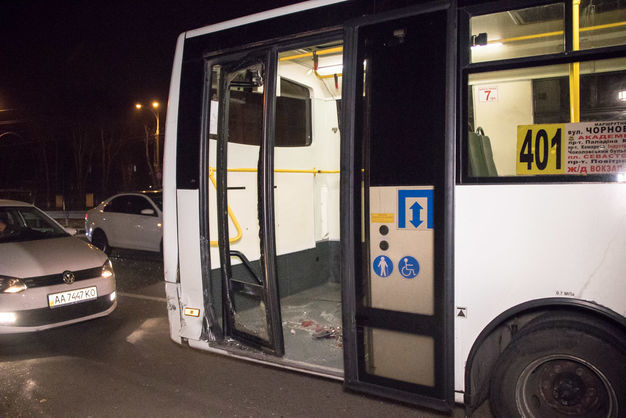 On Sunday, November 11, in Kiev, at the intersection of Aleja Kosmonauta Komarowa and Václav Havel three cars and a minibus collided No. 401.

This is reported by the informant.

The bus driver said that Dacia was moving towards Borshchagovka on the third lane, and he on the second. The driver of the car decided to overtake and went on a maneuver, rebuilding on the extreme right lane on which cars were parked.

As a result, Dacia hit Mazda, who was pushed to the front of the Ford, and flew to the second lane, where she collided with Bogdan. In the bus with passengers, the back door was knocked out, but according to the driver, no one was injured.

No one was in parked cars at the time of the collision.

Due to an accident on the Kosmonautyczna Komarowa Avenue, a traffic jam was built in the direction of Pietropawłowska Borshchagovka. The patrol police staff worked in this place. The circumstances of the accident are investigated.

Let us remind you that we wrote it on August 30 in Kiev, the bus hit the trolleybus. Bruises and abrasions were received by two passengers traveling by minibus.

Also in Kiev Mazda's car pulled into the back of the bus on S. Bandera Avenue, 25/1.