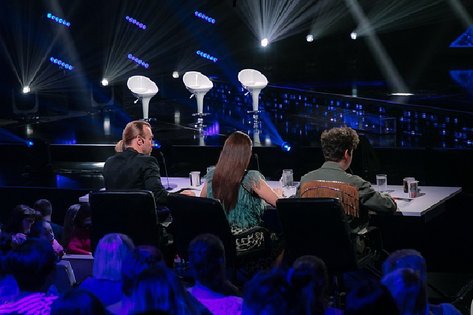 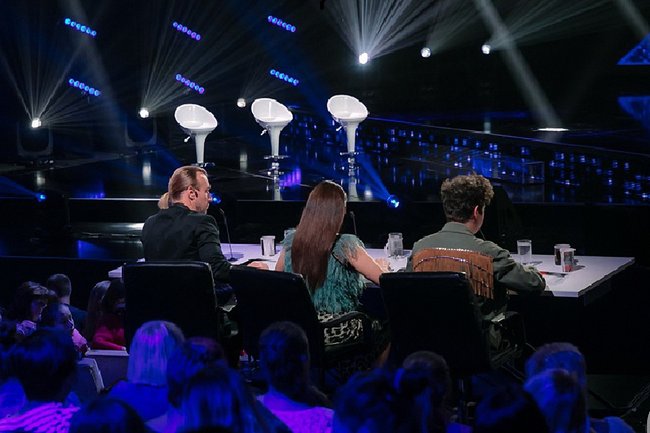 The 12th edition of "X-factor" from the 9th season was released on November 16 on the STB channel. The decisive test "Three chairs" and a difficult choice. Winnick and category "Girls", Shurov and "30+", Kamensky and "Groups", Danilko and "Guys". Why did the mentor Nastya Kamensky cry, who went out into the air, read and looked at No Taboo.

The twelfth edition of the X-factor from the 9th season was released on November 17 on the STB channel at 19:00. In the second training camp the participants passed the decisive test of three chairs, and the judges chose the best singers who will continue to fight for the win in season 9 of the live season. The judges selected from 24 only 12 best participants, 3 in each category "collective", "girls", "older than 30+" and "boys".

In the twelfth edition, the participants fought for new rules, and the public influenced the decision of the producers of X. Starting next week, the 12 best vocalists in the country will compete for the title of the winner of the "X-factor" 9 live.

Oleg Vinnik I chose the three best singers in my category "Girls", NK Nastya Kamenskih I have "Collectives"so he will fight for the championship with interesting groups, Dmitry Shurov he chose the best from the category "30+"and Andrey Danilko received the strongest selection category in season 9 – "Guys."

After undergoing strict training camp trials, the first participant, Katya Romanchuk, understood that the throwing triumph was not enough to sit on a chair and continue the fight. His place in the sun had to bite his teeth. To get to the band Oleg Vinnik, she sang the song "September". She managed to hit the coach with her performance, but she did not win other judges. Nevertheless, despite the advice of his colleagues, Vinnik suggested that he should sit down for a moment in his chair.

space Liora Kotlyar they dreamed of staying on the planet called the "X-factor" show season 9. The performance of the girl did not impress Oleg Vinnik, but he listened to his colleagues' advice and applause, and left the girl in the chair, warning that he would raise when there were more strong participants.

Polona Poloneychik – a young mother from Minsk tried to learn as much as possible about the project and conquer the judges and the audience with the song "I understand". Polina took a seat in a chair in the category "Girls"

Gavrilenko Julia he made the song "Zhuravlі" and took a seat in the chair until the appearance of a stronger participant.

Due to participation in the show "X-factor" season 9 bright strong vocalist Olga Zhmurina he accepted the judges' offer to try his hand apart from the "Square Universe" group and to fight for a place in the sun as a soloist. Olga Zhmurin sang the song of Tina Karol "The Night". Oleg Vinnik planted Olga Zhmurina in a chair in the place of Julia Gawrilenko.

Irina Gritsiv he performed the song Zemfiry "Sky of London". After the performance of the participant Oleg Vinnik approached the stage, he said he could not lift anyone from the chairs, and hugging her, he said goodbye to Irina.

The last girl from the band Oleg Vinnik Margarita Dvoinenko his performance led to the hysteria of all the judges and the hall. Margarita had to give way to the extraordinary Lior Kotlyar.

The second conducted the selection in its category "30+" by Dmitry Shurov.

The first of the band "30+" was a pretender to the handsome chairman from Paris Paul Manondiz with the legendary song "L & # 39; Assasymphonie". Speech was not very impressed by the judges and mentors, but since all the chairs were free, Oleg Vinnik gave Paul a chance and sat him on one of the three chairs.

According to Dmitry Shurov Ekaterina Kornoga – one of the strongest vocalists of the "X-factor" season 9. Katerina sang the song Jamali – "my mother's boy" and took the honorary place in her team before the appearance of a stronger participant.

Yuri Selin he honestly sang a song of the famous song "I vzhe osіn came in my garden." Meeting with a mentor before going to the stage gave Yuri & # 39; em hope that in 49 years he may also be demanded by the contractor. Yuri Selin took a place in the team of Dmitry Szurow before the arrival of stronger performers.

Known many years ago EL Krawczuk performed the work of the author of "Lito". Incredible competition and excitement influenced the experienced contractor, and after he did he fell ill. The judges' opinions parted, one believed and they wanted to call an ambulance, while others even thought it was a special maneuver occupying a high chair. Dmitry Shurov set Kravchuk in his team.

Ambitious and purposeful Olga Tsepkalo she sang the song "White flag", calling the applause and sympathy of the judges. Olga won with a beautiful voice, she moved the players and took part in the team of Dmitry Shurov. Delightful and noble, Yuri Selin, admiring her singing, he himself got up from the desired chair to make the decision of the protector and freed the place for Olga Tsepkalo.

Charismatic public favorite Alexander Ryabenko he conquered the entire training camp, singing the song "Fogs" by Max Barsky & # 39; ego. He attracted attention not only to the public, but also demanded Dmitry Szurow and took the place in the team instead of Kati Kernogy.

The last one tried to get to the representative team of Dmitry Szurow from the category "30+" charismatic and talented Mark Savin. Both the participants and the judges had no doubt that if Mark sang as they had heard each time during the X-Factor 9 season, he not only outshone his competitors, but he was also one of the main contenders for victory. Dmitry Shurov is sure that in such as Mark – the future of this scene. The audience applauded and shouted "Well done". Mark Savin's place gave EL EL to Andrey Kravchuk.

The third one made the choice of their team "Groups" teacher charming Anastasia Kamensky. Nastya was very nervous about this distribution because she believes she does not have enough experience working in groups and groups.

The first in the "Collectives" category tried to get boys from the "Motor & # 39; roll" group. They sang the legendary song of Vladimir Ivasyuk, "I p far away" and took their place in the Kamensky team.

The guys from the "Maw of the Crocodile" group were able to rehabilitate before the referees after the previous fatal performance. Legendary song Kuzmy Scriabin "Sleep Sobe" performed by the group did not give the boy a chance to set off into the air. Nastya Kamenskikh noticed that she could barely reach the boys from the group and sent them, advising them to gain more confidence and come next year.

In good faith, the only seven item booklet prepared for the speech "Duke Time", I tried to charm the creative performance of the hit song "This Love".

The group took the place of the famous group "Motor & # 39; rol". Mentor Nastya Kamenskikh decided that the group alone would be able to take a decent place on stage and without the "X-factor" that there is nothing to teach them.

The last one selects the best participants in its category. "Guys" Andrei Michailovich Danilko.

Always smiling Taras Sokolyuk he sang the song "Do not go", but Danilko did not reach the band.

Last confident Vladislav Semenov in the casting they literally bathed in the judges' compliments. During the initial trials of the training camp Vladislav performed much worse results, which reduced him from the sky to the ground and encouraged him to better prepare for the next performances. Vlad's speech satisfied all the judges and influenced the decision of Andrey Danilko. The guy hit the desired chair.

Ivan Ivaschenko managed to get into the team category Andrei Danilko "Guys", although he had not received a single approving comment from Danilko before. All the judges liked the guy's performance.