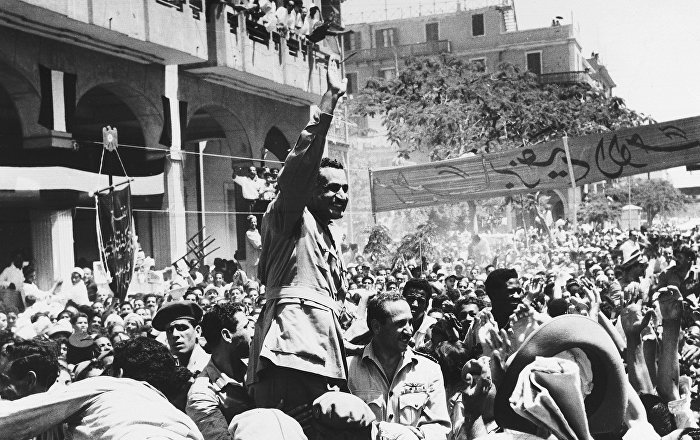 For many years, the unity of Arab countries is one of the most common dreams of most Arab peoples, and the day came when the dream came true between the three major Arab countries, but the dream was not complete. The end of the unity was announced less than 100 days after it was declared the last and smallest units. Contemporary Arabic.

On 17 April 1963, the leaders of Egypt, Syria and Iraq signed the document establishing the United Arab Republic at a time when the masses in Baghdad, Damascus and Egypt expressed their joy in the new state and shouted slogans of Arab unity, freedom and socialism .

Journalist and writer Salah Isa says the reaction to the proclamation of the tripartite unity, "which celebrates the unity of the Arab world, celebrates the declaration of new unity and expects it to be a real beginning to unify the entire Arab nation."

"The separation that led to the disintegration of the Syrian-Syrian unit on September 28, 1961, is no less than a year and a half," Issa said in a historic article for a period that led to the proclamation of the tripartite unity between Egypt, Syria and Iraq. On February 8, 1963, the Iraqi army broke the rule of Abd al-Karim Qasim, who refused to join the Republic of Unity and raised the slogan "Republic not the Territory". New Iraqi leaders have not only announced they are seeking Arab unity, Two weeks after sending a high delegation to Cairo to participate in the February 1963 celebration of Unit 1963. "

On the Syrian front, Issa says: "… Two weeks later, the elements of the Syrian army surprised everyone by launching a revolution that broke down the rule of separatists who dismantled Egyptian-Syrian unity, saying they were seeking Arab unity. pushed into the streets of mass demonstrations, In Syria to what was before the separation plot, when the Northern Territory of the United Arab Republics. "

In fact, two Syrian and Iraqi delegations arrived in Cairo a week after the Syrian Revolution. They met with President Gamal Abdel Nasser to begin a series of joint meetings that reached 19 meetings for a month, in which they discussed how to establish Unity and avoiding crises that led to the ending of Syrian-Egyptian unity in the past.

In his book The Crisis of Triple Unity, Ahmad Baha al-Din said that members of the Syrian and Iraqi delegations at the first meeting noted that Gamal Abdel Nasser did not hurry to complete the union. "It is a task that can not be achieved without reassessing the experience of the Syrian – Just 44 months, especially since the Baath Party, which participated in that unit, initially supported separation.

According to the "Treaty of Triple Unity", the July 23 revolution was a historic milestone in which the Arab people in Egypt revealed their will and the path of freedom, Arabism and unity. What was the Savior's goal in the July 14 Revolution and the March 8 revolution in Syria in the rehabilitation of a unit that was killed by the departure of the reactionary secession after this revolution, shattered all the obstacles that the separatists and colonialists determined with determination on the path to unity. "

The document noted that the leaders of the three countries were driven by the will of Arab popular masses seeking unity and struggling to realize and protect and preserve it and that the core of solid unity consists of unifying parts of the homeland which gained their freedom and independence and national governments decided to eliminate the feudal alliance and liberate the workforce of people to assess their alliance and express their true will. "

The document on tripartite unity was agreed that "the federal state on behalf of the United Arab Republics will be based on a free community between Egypt, Syria and Iraq, and the names of the members of the federal state will be the Egyptian country, the Syrian country and the Iraqi country."

They also agreed that "any independent Arab republic who believes in the principles of liberty, socialism and unity will have the right to accede to this state with free popular will and will join after the approval of the constitutional power of the federal state."

The document highlights that the capital city of the state is the city of Cairo and that the citizens of the Federal State will have one citizenship, Arab citizenship, enjoyed by all those who enjoy the nationality of the member states and whose provisions will be governed by federal law.

The document explained how to manage the federal state and its institutional relations.

The three presidents, Gamal Abdel Nasser, Ahmed Hasan al-Bakr, Iraq's prime minister and Syrian President Noor al-Din al-Atassi, sadly regretted that unity lasted only a few weeks and was destroyed in the bud of differences between Nasser and the party Baath. ! pic.twitter.com/0yxfUxN9iT

But everything above was just a "maneuver" according to the description of President Gamal Abdel Nasser himself, describing Naser in response to the campaign of some Syrian newspapers, which began several days after the signing of the unity agreement, where Syrian newspapers condemned the Arab Socialist Union in Egypt, only to "fill the workers and peasants", and on the other hand the response of the newspapers in Cairo and attacked the Syrian Baath party.

In mid-May 1963, the government newspaper Al-Ahram published the full text of the talks on the unit and its content, and then Egyptian radio stations broadcast the content of Al-Ahram in all parts of the Arab world.

And on 17-4 1963
Iraqi flag changed after posting tripartite unity between Egypt, Syria and Iraq
One color of the green star to Egypt and other Sadat to the Eagle
Two-color hotel with a glass and a bath
Three green stars for Iraq removed from the occupying government
Based on what constitutes the slogan of the Baath Party and the unity of socialist freedom
And what they did pic.twitter.com/qf94upe22O

The closing hour came when Gamal Abdel Nasser addressed Cairo in the celebration of the revolution on July 23, 1963. He reviewed the circumstances in which a tripartite unity pact was reached and accused the Syrian Party of Baath of not being serious about unity and sitting with Syrian and Iraqi delegations under pressure. Popular demonstrations demanding unity, at a time when he did not tighten power in the country, was almost accomplished until he attacked unity and did not want to stop and end his speech, announcing the withdrawal of Egypt from the Triple Unity Charter.