Vice President of the OAU, Prime Minister and ruler of Dubai. His Majesty Sheikh Mohammed bin Rashid Al Maktoum held a wide session of talks with Xi Jinping, President of the People's Republic of China, at the Great Hall of the People in Beijing. , On the margins of the Forum Forum and on the road to international cooperation. His Majesty Sheikh Mohammed bin Rashid Al Maktoum highlighted the role of the OAU under the leadership of His Majesty Sheikh Khalifa bin Zayed Al Nahyan, the President of the OAU and His Majesty Sheikh Mohammed bin Zayed Al Nahyan, the Crown Prince of Abu Dhabi and the Deputy Commander of the OAU the armed forces, To deepen the cooperation with the friendly People's Republic of China and to extend the constructive cooperation at all levels in the light of the political will of the two countries for further advancement of the ideas for supporting the country the difficult partnership between the two countries, which was confirmed during President Xi Jinping's historic visit to the United Arab Emirates State of the Past, which is a new starting point for partnership between the two countries, especially in the economic sphere, an important pillar at the point of bilateral relations .

"Economic co-operation adds a strategic dimension to the UAE and China partnership and the historical relationship between the two countries. We are keen to expand this partnership with a friend of China and look forward to further cooperation in both the private and public sectors. in various areas. "He noted that close relations and the existing strategic partnership with China are enjoyed by all major cultural and economic factors that support the direction of the United Arab Emirates to the future and strengthen opportunities for working together to create conditions to serve the aspirations of both sides to achieve quality development achievements that are provided by the leadership of the two friendly nations in different areas. 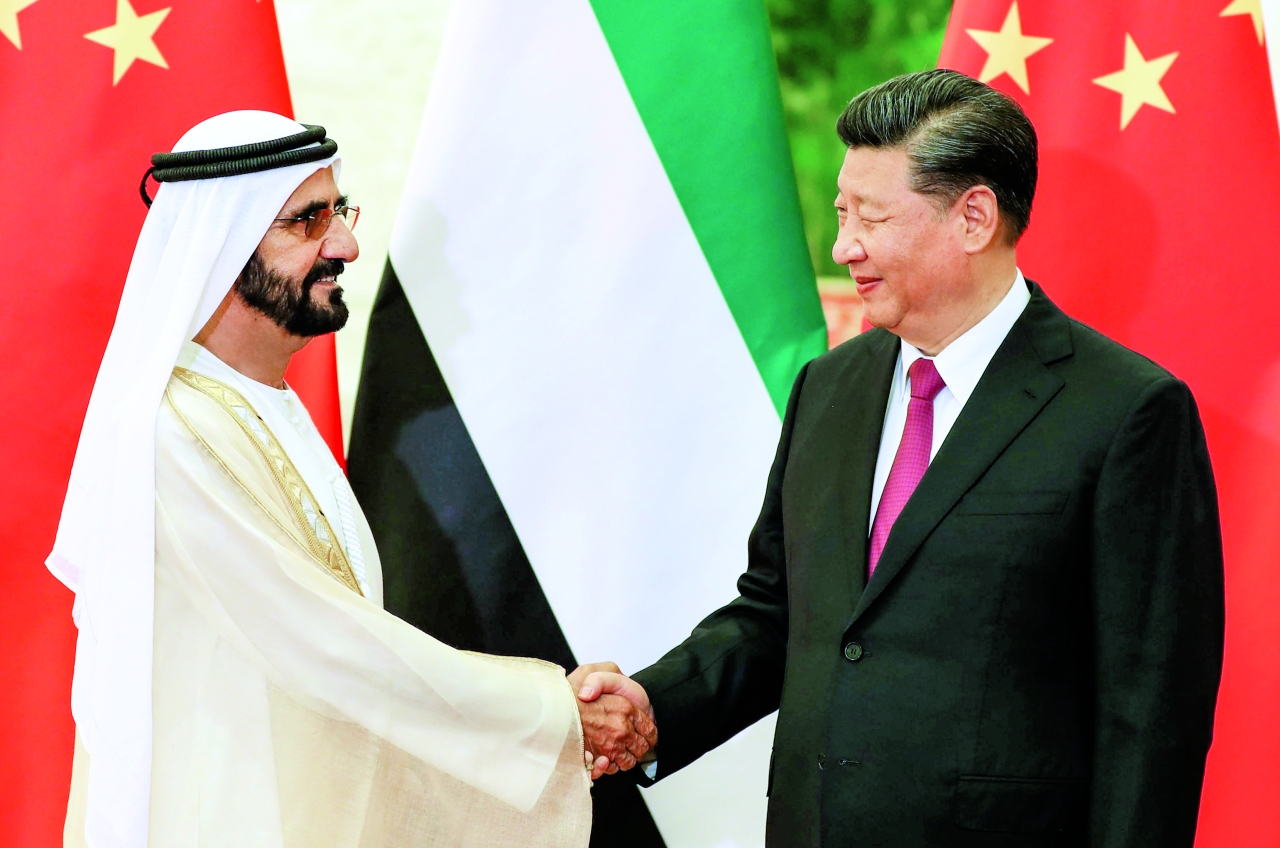 His Majesty Sheikh Mohammed bin Rashid Al Maktoum said: "China is a great country with a long history of civilization. It is the first trading partner of our country in the last five years and we look forward to increasing the bilateral trade volume to $ 70 billion by 2020 In both countries, and to facilitate the climate to reach new horizons for development and to pave the way to achieving unlimited success, the common will to expand the circle of co-operation is a strong foundation, which together we continue to realize Shitei strategic goals for the future.

The two sides agreed on the importance of working to boost the level of co-operation in tourism, while relations between the OAU and China witnessed remarkable development. At the private sector level, taking advantage of the supportive climate provided by the United Arab Emirates for global investments, including strong infrastructure, high reliability, world-class airliners and seaports that facilitate access to the vast markets in the region, as well as the number the Chinese companies Regional Centers of more than 4,000 companies.

His Majesty Sheikh Mohammed bin Rashid Al Maktoum expressed his gratitude for the initiative "Belt and Road" as a qualitative initiative that paves the way for a new phase of global economic cooperation based on openness, pluralism and exchange of opportunities, emphasizing the desire of the UAE to ensure full co-operation to ensure the success of the initiative. And a focal point for accessing markets in the region and the continent of Africa, as well as positive results that may result in the large geographical range covered by the Chinese initiative and all the new dimensions it adds to boost trade, tourism and cultural exchanges among participating countries Where.

"China's scientific and technological progress is an incentive to increase the exchange of experiences to build human and technical capabilities and capabilities, to collaborate in building people and improving their capabilities," he said. Investments in which we want to expand the circle of partnership with the world in order to consolidate our foundations and increase the ceiling of the desired outcome. "

"We are participating in China at the apex of the belt and on the road to international cooperation, a summit that confirms China's leading role in the global economy," We are the biggest partner with them in the region, and we will maintain this partnership with the growing role of China " , he said yesterday. Who plays in changing the map of the global economy ».

He added: "We held a meeting today at the belt summit and on the road to international cooperation with the Chinese President and the Chinese Prime Minister. I reassured the meeting that the UAE looks with optimism towards the next phase of the world economy and that our partnership in this international project will be accelerated in the upcoming period. "

For his part, President Xi Jinping welcomed the visit of His Majesty Sheikh Mohammed bin Rashid Al Maktoum and his accompanying delegation to the People's Republic of China and the participation of His Majesty and the accompanying delegation at the second session of the Forum of the Belts and the Road to International Cooperation. The ties of friendship and co-operation between his country and the UAE, which China is a strategic partner in the region.

President Ping expressed gratitude for the pioneering role of the United Arab Emirates under the leadership of His Majesty Sheikh Khalifa bin Zayed Al Nahyan, President of the United Arab Emirates, at the regional and international level, as well as her contribution to the promotion of international cooperation and his interest in expanding bridges for communicating with the peoples of the world. The balanced OAU approach to its external relations and the desire of its leadership to confirm the role of the UAE in spreading the spirit of tolerance and co-operation as an important basis for enabling the world's people to meet the common challenges facing the world.

Talks refer to all relations between the United Arab Emirates and China and their means of strengthening and strengthening the level of bilateral co-operation at new levels, adding new strategic dimensions to the historical ties that have long been joined by the two countries and the two friendly nations in the light of a consensus on the importance of continuing efforts to develop a partnership between the two sides, within its various political and economic paths, by exploring further integration opportunities and more Quite encouraging the private sector in the UAE and China to monitor and activate further opportunities for increased cooperation, Part trade and tourism. 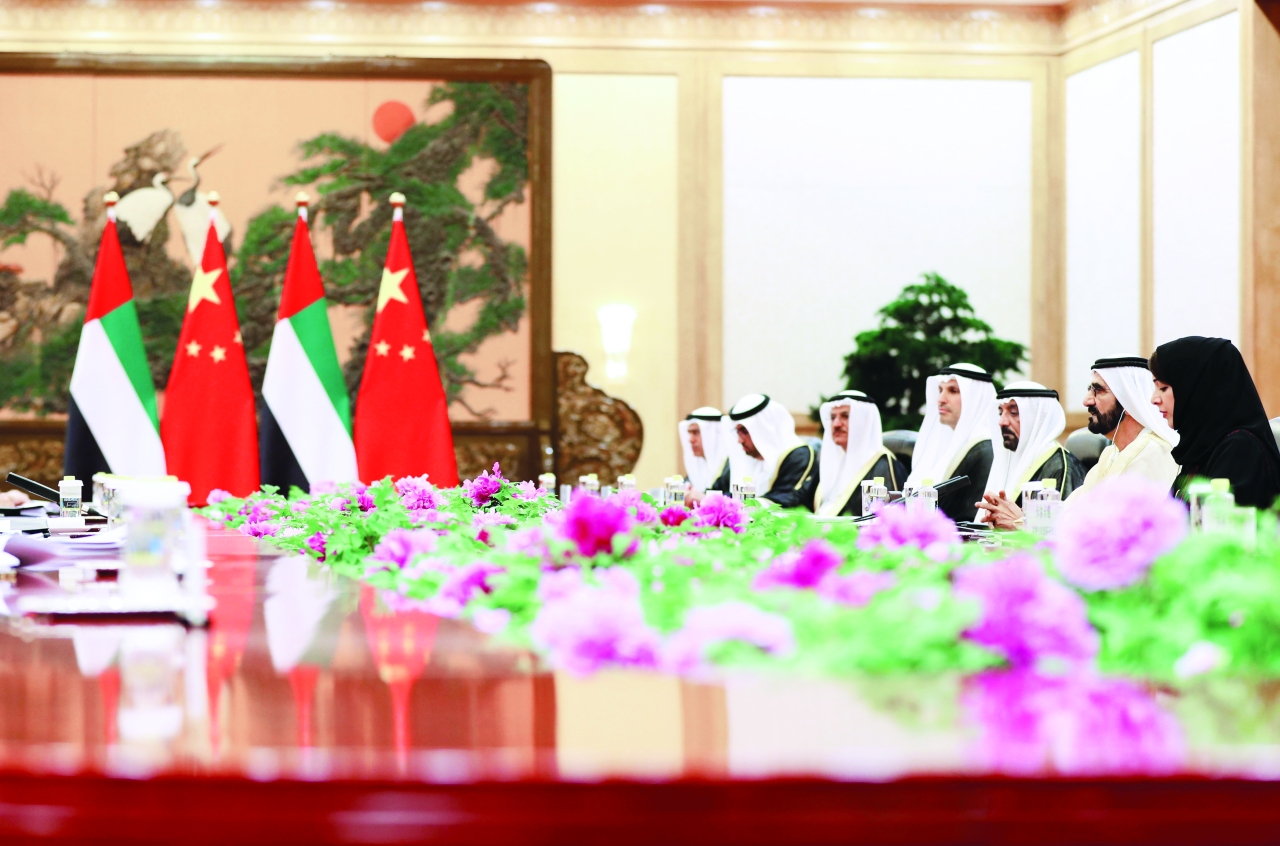 Mutual investment between the United Arab Emirates and China is flourishing in many specific areas, including ports, economic development, manufacturing, petrochemicals, oil and gas, technology and catering, tourism, real estate, wholesale and retail trade, financial services and others . Future opportunities for cooperation between the two countries include several sectors, especially in the areas of innovation, technology, scientific research, advanced industries, artificial intelligence, small and medium enterprises and other future routes.

China is the first trading partner of the UAE. Total oil trade in 2017 reached more than $ 53.3 billion with a 15 percent increase, while the OAE accounted for 30 percent of China's exports to Arab countries and 22 percent, Arab and Chinese trade in 2017, and the number of Chinese companies operating in the country up to that year by more than 4,000 companies, including free-zone companies, in addition to about 300 commercial agencies and 5,000 brands.