The Department of Surveillance Control of the Syphilis disease found a higher trend: PPTVHD36 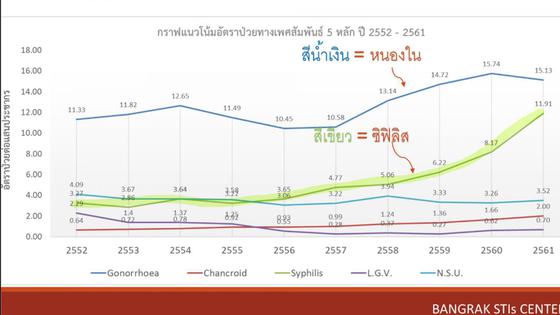 Dr Suwanchai Watanaingharenchai, Director-General of the Department of Disease Control, said that according to the situation of syphilis posted on the Facebook page at the Hospital Banak Hospital under the Department of Disease Control, the Department of Disease Control awarded the Bureau for AIDS, Tuberculosis and Sexually Transmitted Diseases . Office for Disease Prevention and Control, all 12 locations across the country AND Institute for the Prevention and Control of City Diseases Monitoring and monitoring of the state of syphilis closely After determining that the state of syphilis increases E is a sign of unsafe sex and the risk of HIV infection In 2018, the most reported cases of sexually transmitted diseases in the age group of 15-24 years, representing 36.9 per cent, who are among teenagers, school age and reproductive age.

HIV surveillance data among students in 2017 revealed that teenagers tend to have faster sex With an average age of 13-15 years and do not use condoms for first sexual intercourse, about 30 per cent. Data on behavior of condom Mathaiom 2, male and female, 76.9% and 66.7%, Mattayom 5, male and female, 74.1% and 76.9, vocational education, male and female, 69.5% and 74.6%. Not yet aware of the effects of unprotected sex What will make teens infected with sexually transmitted diseases, HIV, and not get pregnant

Dr. Suwanchai said syphilis is a sexually transmitted disease. Receiving blood from infected persons Or from a mother who is infected with syphilis and is not treated with the fetus After infecting the onset, genital lesions can be found. Then the wound will heal. And there will be a rash on the body, hands, feet, or genitals. There may be hair loss in patches. Some infected people may not have symptoms. But the infection will remain in the body if it is not treated. Over the past 10 years, this infection can cause abnormalities in the brain. And the cardiovascular system Because it's a disease without symptoms Patients will be aware that infection is only possible when examining blood, such as a blood donation test. Or screening in an antenatal period Which disease has medicine and can be cured But there should be continuous monitoring of treatment To see blood levels

To prevent disease, the Department of Disease Control recommends using a condom at any time. And responsible for couples and society Do not change your partner frequently If there is a risk of unsafe sex It is recommended that blood is regularly recorded for syphilis and HIV screening. Take care of their health and reduce the chances of infection

In addition, the Department of Disease Control has a policy to support the use of condoms. Which people can get condoms without any costs at all Through government departments and agencies under the Disease Control Department If patients or those who suspect that they are ill can receive advice through the Facebook center bangrak stIs, including self-defense information and couples for to be safe from sexually transmitted infections and AIDS How to properly put the condom Or for more information, please contact the Chronic AIDS Advisors Line of 1663 or the Disease Control Department at 1422