Strong reaction from the Dynamo camp: "After the match with Calarasi, I would not have held anyone!" 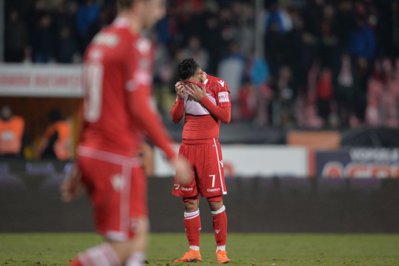 The match against Danube Calarasi disappointed Dinamo's leadership. "Dogs" lost 1-0 through Nakid Amari's goal in the second half and stayed second in the playoffs, four points from Gaz Metan Medias leader.

If he needs to score a goal after the match in Calarasi, the sport manager of the team, Jonet Danziuscu, will not keep anyone: "Salaries are updated We will draw a line at the end of the season and we will see who is left. We want to change as little as possible." "If I wanted to choose after the Calarasi game, I would not have kept anyone if four to five left, they will come four to five in their place ", said Jonet Danziuscu in Digi Sport.

It was the second defeat of Dynamo in the playoffs after Medias with Gaz Metan scored 2-1. Team coach Mircea Rednich will have a chance to retaliate in this stage before the Transylvanians, the match between the two will be scheduled on Friday at 21 o'clock in "Stefan Cel Mare".