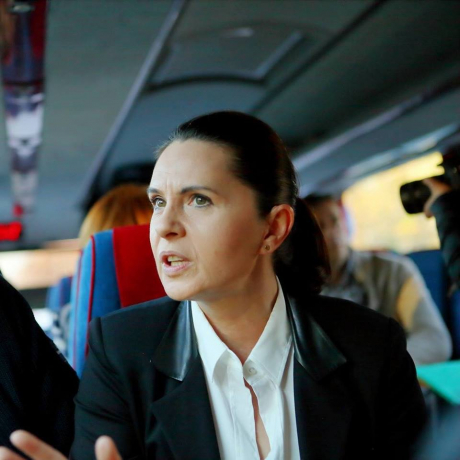 Liberal deputy Adriana Saftoiu said on Wednesday that the PSD would win the European Parliament elections next year, as the "machinery" of the party is still going, while Roman Movement leader (RO +) Dacian Ciolos thinks that Romanians need political people who will inspire them not only to overthrow the PSD.

The two took part in the debate "Debate on the opposition, where?" Organized by the Social Dialogue Group (GDS) and the magazine "22". USSR senator, Vlad Aleksandrescu, spoke about the parliamentary configuration regarding the ruling party. "At the moment, the parliamentary situation is particularly difficult due to political clientelism.The Social Democrat Party is not a party that works on ideas and principles, for more or less noble reasons, is a party that works on purely clientele. Therefore, of course, the dossier for everyone is a proposal the censorship for everyone to go and study the best moment to submit this proposal of censorship with chances. It's not easy. The geography, the PSD client is extremely complicated and changing every day, with the satisfaction of the supreme leader, Mr Livy Dragnea "said the MP. In return, Adriana Saftoi said she was "very arithmetic to give up this government". "Not because there are no tension in the PSD. It would be crazy not to tell you that in the corridors of the Parliament, in the banks, you can not hear that scream. (…) They will not vote for censorship if they do not offer something and (…) what they want to offer is a guarantee that they will remain in government, "she added.

At the same time, Liberal added, the European parliamentary elections to be held in the spring of next year are a "party test". "The European Parliament will give a trend. There will be resolved how the parties stand, it will determine what will be the presidential battle." (…) I am really curious about the hierarchy of the parties in the European Parliament. Please do not take me in the name of the evil, but all PSDs will conquer the deputies, "Saftau said. She said this gratitude is based on her own experience. "I am a man who saw many campaigns, I felt (…) and I know that MPs are party elections, party mobilization, and that is their machine and further, flogging things," said the deputy, who spoke more about the need for consensus. PMP leader Eugen Tomaz also talked about such a consensus among opposition parties. "This mammoth can not be defeated without a coalition. (…) While we will not all sit on the same table, it will be quite difficult to persuade the Romanians that this alternative is worthwhile," he noted.

Cioloş: The PNL door is open

The leader of the Movement Romania Together, Dacian Ciolos, discussed the co-operation of the new political party with the parliamentary parties. "And with the PNL on our side, the doors are open." Well, with Mr. Orban, we have not had any discussions in the last few months. (…) I think that they should first be clarified in the PNL and we can not do that. , PNL is an important party and is a party that needs Romania. Romania needs a reconstructed PNL in such a way as to assure confidence and, I believe, not only to maintain its electorate (…). PNL needs and inspires " , he said. According to Ciolosz, the political party must offer more than the removal of the ruling party. "Romanians also need to inspire people, inspire confidence and inspire their confidence not only to break down the PSD, but also to embed something that will help Romanians to be projected over the next ten years, he said. At the same time, the leader of the RO + mentioned the reasons that led him not to enter politics as soon as his term was completed by the technocratic prime minister. "I have made it clear that I will not take part in the elections as long as I am an independent prime minister. (…) We believe that the responsibility is for those who participate in the elections, and not for a government that did not have a majority in the Parliament, and it should come from proposed a political alternative, "he stressed. The GDS debate gathered parliamentarians, journalists and members of civil society.