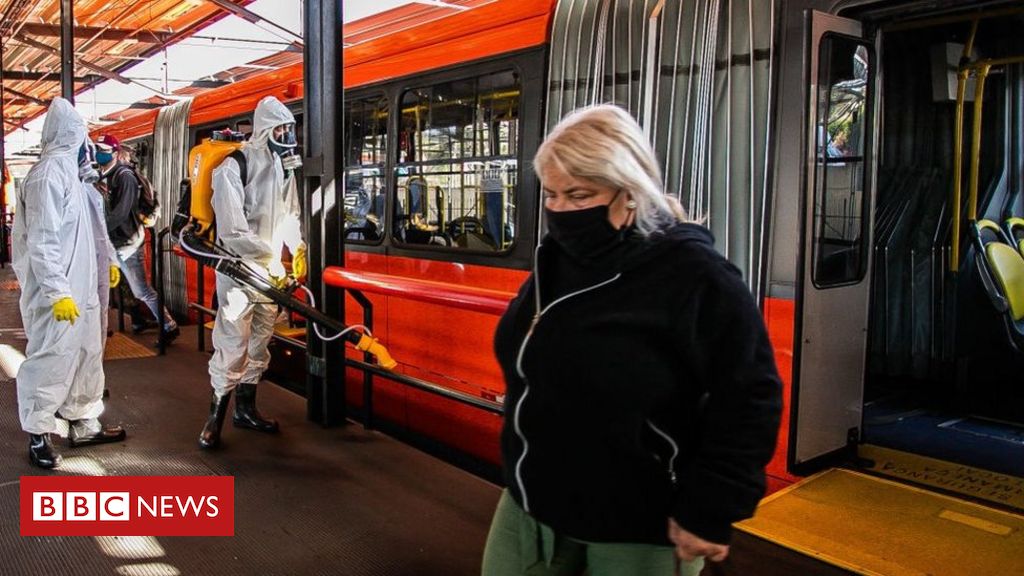 О infectologist Jaime Rocha has decided to record a video in the last 30 days in the hope that it will spread through WhatsApp groups in Curitiba to raise public awareness.

He began by saying that he did not want to talk about Covid-19 anymore or the importance of washing hands or wearing a mask. “I’m sure you already know all this,” he said.

The doctor wanted to warn that he was starting to miss beds for patients who became ill due to the new coronavirus in the capital of Paran., Where he works.

Rocha then warned: if the population does not cooperate, adhering to coronavirus control measures and avoiding crowds, the health system would not support the demand, people could die from lack of care.

He ended with an appeal: “I am not an alarmist, I am real and I am looking for everyone’s contribution again.”

At that time, the Covid-19 pandemic got out of control in Paran..

The contagion has increased again

The rate of virus transmission, which has been below its most dangerous level since mid-August, has risen again.

This index indicates how many people are infected on average by those who are already ill. If it falls below 1, the epidemic will gradually end. In addition, it is gaining strength, and the number of patients is growing on a geometric scale.

The moving average of the transmission speed takes into account the previous 14 days of the index. Epidemiologists consider it the most appropriate value for measuring the severity of a pandemic, as it corrects specific data disturbances caused by delays and other failures in detecting test results that confirm cases.

In Paran., This index returned above 1 on 6 November and did not stop rising until 19 November, when it reached a peak of 1.36.

At that time, 100 people contaminated another 136, which in turn infected another 185, and so on.

It did not take long for this to be reflected in the number of people seeking medical help.

The large transmission takes some time to be felt in health care homes and hospitals due to the nature of the coronavirus.

It takes an infected person an average of seven days to feel the first symptoms. The experience of health professionals shows that after that patients usually need a few more days to see a doctor.

But the most intense infection inevitably turns into more visits to emergency rooms, and this is reflected in official statistics.

This has been the case in Paran. Since 12 November. On that day, the moving average of confirmed cases was still 1,233, the same level as in previous weeks. But eight days later, it almost tripled to 3,569.

Nine more days passed and a new peak came: 3,612. This is a pandemic record in the country so far and 75% higher than the highest rate recorded before the beginning of November (2,056 cases, on August 6).

The hospitals are full

Just as the most intense infection turns into multiple cases, most cases leave hospitals full every hour. This is what is happening in Paran..

“Patients need six to eight hours to be cared for in emergency rooms and to stay one to two days in the wards until they can be admitted,” said Jaime Rocha, who works at two private hospitals in Curitiba.

There is a growing number of patients with covid-19 or suspected disease waiting for a vacancy at an ambulance or ICU at a public hospital in Curitiba or the metropolitan area of ​​the city.

The queue reached 120 last Wednesday (2/11), according to the government of Ratinho Junior (PSD).

The State Department says they are receiving medical treatment in other health facilities while waiting and that the total number of beds in the network is expanding.

The average occupancy rate in the country was 89% on Friday (4/11), but reached 96% in the capital, where hospitals are already announcing service restrictions because they do not meet demand.

“We were already expecting an increase in cases,” Rocha said, “but not so fast and not so fast.”

Did it close too soon?

“Paranрана closed everything prematurely,” said epidemiologist Nelson Arns, who is Pastoral da Criyanka’s international co-ordinator and lives in Campo Largo, in the Curitiba metropolitan area, and works in the capital.

The first infections in the country were confirmed on March 12, when there were 200 cases in Brazil. The Paran. Government adopted several measures of social isolation a few days later.

Classes were interrupted in public schools and universities, and the same is recommended for the private network. Theaters, cinemas, libraries and museums were closed. Cultural events could no longer be held.

The servers started working from home, and the population was asked not to go out on the street, among other measures to prevent the epidemic.

“There has been no community transfer in the country yet,” said Arns, a public health doctor. An epidemiologist refers to the term he defines when the virus circulates freely among humans.

If this happens, the infection will no longer occur only in contact between people already living together, such as family and friends, but also in ordinary everyday situations, among strangers.

Arns believes that, in the beginning, measures of social isolation should not have been applied, but of distance, which are less restrictive.

“The burden was too heavy and, in a way, unbearable, especially for young people,” he said.

“Well tested, but not enough”

Paranрана’s health secretary, Beto Preto, said the country was not the only one to take such measures at the time, and said the government thought it best to take the lead in the process.

“City councils began to work in a disorganized way, making individual decisions. “We understand that the measures should have been generalized.”

The secretary also says the country is one of the most surveyed in Brazil. “We are first or second in the PCR exams,” Preto said.

This type of test detects the presence of a virus in the body to confirm whether a person is ill or should not be used in extensive testing, says the World Health Organization (WHO) to identify cases and break the transmission chain. a virus.

Official data on the number of tests performed per 100,000 inhabitants show that Paran. Tested far above the Brazilian average. For some months, the local index was twice the national index.

But the country still has rates of 70% to 85% lower than those in the world’s most tested countries, such as France, Germany, Britain, the United States and Russia.

“In the reality of the country, Paran. Has tested well, but in terms of what needs to be done, according to the WHO, that has not been enough,” Arns said.

“Find the most diverse opinions on what has been done, but so far we have controlled the pandemic,” said Secretary Beto Preto.

Epidemiologist Nelson Arns agrees that it had a positive impact on the state’s early quarantine.

This managed to contain an explosion of cases in the beginning and prevent the collapse of the health system. Parana has become one of the least affected in the country by the coronavirus.

The lower intensity of the local epidemic and the deterioration in other parts of the country meant that it had only the 22nd highest number of cases between the 27 states and the Federal District in mid-June. But then, the number of cases began to increase.

At the same time, the crisis has cooled in other countries, and Paran. Has risen to the top of the Brazilian pandemic, despite a temporary tightening of isolation measures for 14 days in July.

In August, it was already the 14th country with the most cases. Two months later, it was the 10th. Today it is in 8th place, with more than 294 thousand infections confirmed.

“All of this has led to exhaustion,” Arns said. One effect of this is that they are increasingly not complying with pandemic control measures, says the epidemiologist.

“There is a part of the population that adhered to it, but there are also deniers and those to whom you explain the care and it does not help. You then call the patient’s house to give a positive test result and find out that he is on the street. “Or call to see who is sick and to hear that the person went to visit their parents because they thought it was okay because they did not feel bad.”

The paranoia did not stay at home

Data from the company In Loko, which monitors social isolation across the country based on geolocation data from mobile phones, show that, even before, paranoia did not stay at home.

The highest rate recorded in the country has never exceeded 45% in the entire pandemic and, since June, has been below 40%. In September and October it reached its lowest level, 36%. It rose again slightly, to 38%, in November.

“If that were enough, we would not be in this mess,” said Vivian Hessel, a consultant for the Brazilian Infectious Diseases Society in Paran..

She says she always hears stories about Covid-19 patients who have left home or who think that because they are young or have no other illnesses they can catch that everything will be fine.

“They forget that the disease can be transmitted to other people,” said Hessel, president of the Brazilian Association of Professionals in Infection Control and Hospital Epidemiology.

In addition, the positive factor for Paran. Is now turning against the state. Because it was less affected earlier, the number of people already infected is still small.

This index reaches a maximum of 20%, says Hessel. Thus, fewer people have immunity against the coronavirus, which spreads easily.

Added to the relaxation of the measures in Curitiba at the end of September with a downward trend of the previous cases, a series of vacations in October and November and municipal elections.

“Governments have become more flexible. Even movie theaters and museums have reopened. All of this has given the impression that the crisis is over,” said Nelson Arns.

“People relaxed,” Hessel agrees, “and we saw a lot more movement than we could have expected.”

Stricter measures to avoid the worst

City Hall shut down bars, nightclubs and parties. Restaurants, malls and street shops are still open, but with limited time.

A curfew has been adopted across the country, between 11pm and 5am, until the following 17. The government is studying the closure of squares and parks. He also recommended that civil servants start working from home.

“We are trying to reduce the circulation of the virus, and especially prevent the operation of bars and clubs, because 30% of the new cases are among the youngest,” said Secretary Beto Preto.

But he acknowledges that the implementation of these measures is becoming increasingly difficult as the pandemic continues.

“Yes, there is exhaustion. It is nine months, right? People want to get back to normal life. But we are expanding awareness actions.”

Dr. Vivian Hessel says that experience so far shows that the pandemic will not end in social isolation alone. “But it will be even harder without it,” he said.

Infectious disease specialist Jaime Rocha explains that pandemic measures usually take two to three weeks to reduce the number of cases. “We will not be able to stop this runaway train overnight.

In the meantime, he is working and hopes that timely action will be taken and that his and his colleagues’ warnings to Paranрана to avoid the worst will come into force.