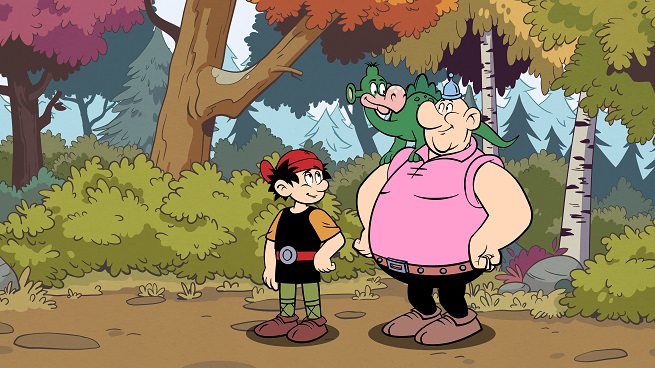 First information about the work of the animation “Kajko and Kokosh” appeared in mid-2018. From the beginning, the Warsaw animation studio EGo FILM was involved in the work, which signed an agreement with the Kreska Foundation. Janusz Christie, who promotes the artist’s art.

The animation received a grant from the Polish Film Institute in the amount of PLN 390,000. zlotys. Work on the pilot episode began at the end of May 2019.

The series “Kajko and Kokosh” is based on the fun adventures of two friends: Kajko and Kokosh – Slavic warriors and their faithful companion, the dragon Milush, who together experience ups and downs in the fight against the Zbojceri army.

Friends serve the castle Mirmil on a daily basis, defending the settlement in which they live from all dangers. And these are not missing. The biggest threat is the band of robber knights – Scooters. Hearst Zboiceri, the Bloody Hegemon, dreams of conquering Mirmilov, and since Kajko and Kokosh took his egg from which the Milus dragon was hatched, he also wants personal revenge against a couple of friends. Hegemon open attacks, tricks and strategies – this is what Kaiko and Kokosh will face.

Each episode of the series will be a separate story, and all will be associated with friendship as the ultimate value of the series. The premiere of the animation on the Netflix platform is scheduled for 2021.

– This choice was obvious to us. “Kajko and Kokosh” is a very valuable element of Polish culture and our birth phenomenon – commented Łukasz Kłuskiewicz, in Netflix responsible for acquiring content in the Central European region. – Brave warriors have been brought up by whole generations of comic book adventures, so we are working on a series with great excitement. We are happy that the iconic characters will come to life and become even more pronounced in the animation. “We are convinced that thanks to Netflix, Kajka and Kokosh will be loved by viewers around the world,” he added.

Screenwriters include Mike de Seve and Yorkoon-based Baboon Animation. The production is the responsibility of the animation studio EGOFILM under the supervision of Evelina Gordijeyuk – host, executive producer and founder of the comic book adaptation.

– The series “Kajko i Kokosh” is a production cinema that I decided to make to honor the memory of Janusz Krista. Much of Polish literature, including the Master’s comics, deserves film adaptation, not only because of its huge, ever-growing popularity and crowd of loyal fans, but also because of the film’s film potential and unique artistic layer. It is these unique qualities of the comic book “Kayko and Kokosh” that convinced me that it is worthwhile to take up the challenge and face something so huge and important for our culture – comments Evelina Gordijeyuk, host, originator and executive producer of the series.

The organization and production process is supervised by Maggora Badovijec – line producer. The rights to adapt the comic were acquired by the Kreska Foundation. Janusz Christie, whose president is Paulina Krista, granddaughter of the creator of Kajka and Kokosh.

In the third quarter of this year. Netflix subscribers increased by only 2.2 million to 201.15 million.

According to a study by Mediapanel in October this year. The Netflix browser version was visited by 5.36 million Polish Internet users.

The platform does not disclose how much users pay in Poland. Comparison estimates that there may be 900,000 of them.

In 2019, Netflix spent a record $ 15 billion on software content, according to analyst firm BMO Capital Markets. According to experts, the site does not intend to limit itself to investing in content in the future. In 2020, it could be 17.3 billion, and in 2028 – 26 billion dollars.