Paweł Graś on the activities of the VAT mafia during the PO government. New recording from Owl and Friends 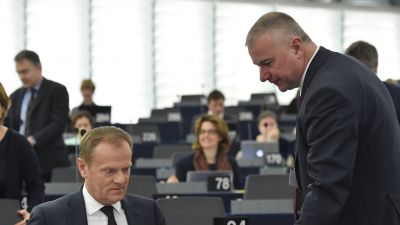 It is September 2013, for two years there has been an increased VAT, and yet tax revenues are declining. On the recording that went to tvp.info, Paweł Graś, then government spokesperson and the closest collaborator Donald Tusk, talks about how the VAT mafia is raging in Poland, describes the way it operates and admits that criminals are unpunished. He also jokes that he can give advice to a colleague who has a treasure trove. – The production of invoices is better than selling drugs – notes his interlocutor.

Tapes disclosed by TVP.Info and TVP3 Szczecin. We publish a full recording of conversations

The tvp.info portal has revealed more tapes recorded in the restaurant Sowa i Przyjaciele for the last few days. They were there …

The gentlemen raise various political threads, mainly concerning internal competitions in the Civic Platform and the threat of losing power to the then-new leader in polls, Law and Justice. A hot topic is the upcoming clash between Protasiewicz and Grzegorz Schetyna over power over the Lower Silesian PO.

– There will be different sections, from what I see in the regions, they will simply be crowded – says the then general secretary of the party, Paweł Gras.

In response, Tomasz Misiak tells how strong the emotions of the Protasiewicz-Schetyna dispute are.

The closest collaborator of Donald Tusk during the conversation sums up Slawomir Nitras briefly. – I have recently had an argument with him, it's a psycho, for, he is – says Paweł Gras and consolation Protasiewicza: You already have no way out, you have to fight, you can not give up. Somehow it will be.

In what Paweł Gras says about the then opposition, you can see the respect and fear of Jarosław Kaczyński. Gentlemen, comment on the recently completed forum in Krynica, talk about the proposals of the PiS chairman for business and his 500 Plus program, that is ideas "very dangerous and very thought out" (Gras).

How Onet manipulates tapes. New information about the tvp.info portal

Five Onet journalists have been sitting for over a week with a three-hour recording, one of hundreds of tapes from "Owl". Reason? Mateusz is recorded on it …

During the meeting, the gentlemen also talk about the plans to sell LOT. Paweł Gras is convinced about the importance of state airlines, but he is skeptical about this concept and he is inclined to sell LOT.

– It will be important and strategic if Polish airlines will be able to make a decision in the future, eg Warsaw-Vietnam, Warsaw-China – one of the interlocutors explains, but in the opinion of Donald Tusk's government spokesman "this is just a question, do you want to have LOT in Polish hands, where you will pay 3 thousand for a flight to Paris. Do you want to have a flight to Paris for 800 zlotys? "

When it comes to the topic of the VAT gap, the growing problem with VAT collection and the activities of tax mafias – the gentlemen are reviving.

– These VAT frauds, wherever I hear about the subject of organized crime in Poland, it's actually not drugs. The production of invoices is better – says Maciej Witucki. – It is absolutely not profitable to produce drugs anymore, only VAT – Paweł Gras answers him. – This is a problem, because you know it, it's like a Colorado beetle, you know, from area to area. Today it is gold, steel bars tomorrow, the day after tomorrow, lime, then rapeseed oil, then you know, for everything, you can absolutely anything … – he explains to his colleagues.

"Zero", "mendy" and "bloated snouts". Marshal of the province with a businessman about Poles

"Doctors are angered snouts" – said the Marshal of the West Pomeranian Province, Olgierd Geblewicz, in the restaurant Sowa i Przyjaciele. On recorded …

Paweł Gras: Do not want, the finance minister does not want to introduce my ideal idea how to improve the state budget. Income tax on tax deductible expenses.

Members of the meeting: (laugh)

Tomasz Misiak: I have to tell you that the idea is simply brilliant and we would be immediately Angola again. I mean, there is something called a curve … Laffera, which says that when there is such a moment of inflection, then … (…) Your suggestion is exactly at the end
(…).

Maciej Witucki: However, such a small matter. For me is the topic of harassment, we talked about it.

Paweł Gras: What harassment through the treasury, really. I can give you this matter … (laughter).

Tomasz Misiak: Do you remember renting an apartment?

Maciej Witucki: Yes Yes. (…) The problem is now that I only speak as an electorate. And as an electorate, this lady calls me once a year and I lived well with it, you lived well. She knew she was taxing me twice, but we always did [niewyraźnie] 100 zlotys and active grief, than how to get there to work, pull out some papers. PLN 100 and yes … The problem is that this year the lady called me a second time. "Mrs. Joasia," a pretty, young, really beloved girl. "Mrs. Joasia, but why do you call me for the second time?", "I am very sorry, you know, we were given an order to speed up the grace period of speed, which is why [niewyraźne] for this active regret. " And, of course, twice 100 zlotys, I … She later keeps telling me, "buy a brick" (?), What I buy, "what are you going to do, let me wrongly tax you, it will be easier for you." It's ok, only as it happens twice, I think – there are voters getting such signals, right? (…)

Paweł Gras: You know, everything … there is always something for something. An alternative to harassment and for searching at all costs, so it's somewhere to pick up something, right? Tax or something.

How PO was voting for a Szczecin businessman. Investigation of the TVP.Info and TVP3 Szczecin portal

Shocking pathologies at the Szczecin Civic Platform. Reporters TVP3 Szczecin and TVP.Info portal reached recordings from conversations in the restaurant …

Maciej Witucki: These VAT frauds, wherever I hear about the subject of organized crime in Poland, it's actually not drugs.

Paweł Gras: This is a problem, because you know, it's like a Colorado beetle, you know from area to area.

Tomasz Misiak: You create a network of hundred companies …

Paweł Gras: What hundred ??? You do not have to create a hundred, well, what are you! The problem is only to find … today it is gold, steel bars tomorrow, the day after tomorrow, lime, then rapeseed oil, then you know, for everything, you can do anything, absolutely … and before …

Tomasz Misiak: … the machine will come

Maciej Witucki: And as an unlawful – there is no legal structure that could be created, stating that the separation of hands from the steering wheel in the car during police control is …?

Tomasz Misiak: This is widespread. I am a huge VAT payer, I pay millions of VAT a month, hundreds of millions of VAT a year (…) I do not have VAT costs (…) therefore, the number of offers, companies that want to optimize this. ..

Tomasz Misiak: Dramatic. This is a real problem. The guest comes to you and says, "Sir, I will sell you computers. You know, after all, it will dispose of you in three months. You will pay me half the VAT on the invoice, and I will pay these computers … ". you understand, it will bring you, I will bring you this equipment. This is one thing. They bring used computer equipment.

Tomasz Misiak: Tell me how the official coming to the company will check whether it is used computer equipment or not?

Tomasz Misiak: And tomorrow I can buy, for example, for two or three million zlotys of computer equipment, where my guest brings me the equipment scrapped for value, I do not know …

Tomasz Misiak: … five thousand zlotys, or how many, because they collect anywhere for free, so that also … some companies pay extra to take money from them – and issue you an invoice for 3 million zlotys. You have 600,000 VAT, you give this guy three hundred, three hundred you take your pocket. And you have additions on income tax, because the guy sold you … And that's you know … Finding later how he did it, what he did with it, etc.

Paweł Gras: Taaa hearing … experts, miracles of invisibility. Not to …