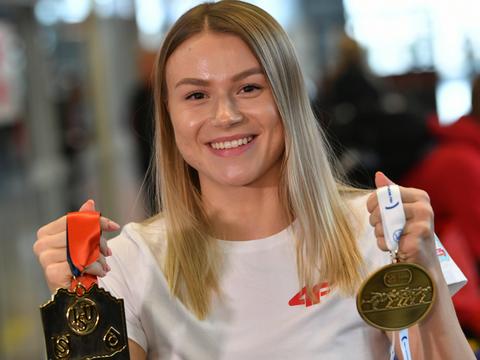 What are these two gold World Cup medals for you?

Awareness that I passed the nine best runs in my life. I gained experience because I was in different situations – I was ahead of and blocked my rivals, I had to keep the lead during the round. Each of these factors is important and they all contributed to the two gold. Now no one will take it away – neither medals nor experience. I'm becoming a better player.

Getting better and getting faster! No woman has ever beat the round in the same time as you did during the semifinal in Calgary (8.3 seconds).

I did it while overtaking Kexin Fan Chinese – I concentrated on that, which detached my attention from the pace. Only after the run I heard from my coach: "Natalka, you know what round you did ?!". Even Elise Christie herself, congratulating me, she said that breaking the 500 m world record did not beat the lap as fast as I did in the first World Cup.

In that race you got only 0.252 seconds worse than the British world record!

It was influenced by the fact that ice in Calgary is very fast. It's the same in Salt Lake City.

Being aware of the fact that the first World Cup competition takes place on the world's fastest ice rinks, you were more likely to count on satisfactory results?

Yes. Even before the start, we talked with the trainer that we would definitely improve our time – regardless of the distance.

How did you react to these great runs and two wins?

Fatigue was enormous. Even it was difficult for me to drive to the trainer and make a high five with her, so my legs hurt. Honestly, I sometimes try to think back to those moments, but many moments have escaped my stress and adrenaline. Then I look at the medals and they remind me of what I achieved. That I actually did it.

What made you improve your results so much, and now not only does it start a strong run, but it keeps up the pace to the end?

The details that made it impossible for me to drive fast went away. For example, I had to move the shoulders more inside, I worked on the moment of pushing away, I have peace while driving and I am more relaxed. My maximum round increased – from 8.5 seconds to 8.3. Hence the last two laps are not so tiring for me. I have better speed endurance at the end of the run.

These two wins to start the season are continuing streaks after the March world vice-champion or a completely new hand?

I treat each season as a separate story. After the previous, Olympic, I had a little more free, completely loosening. I entered the new one with a fresh head, a new group and staff.

In the end, you can cooperate with your club coach Urszula Kamińska. How important was it for your results?

It's very helpful, because I was preparing for the games with her and then to the world championships. In Pjongchang she could not be with me, but I'm glad she finally became a coach of the team. I think that she is the only woman in the profession who has her head on her neck and knows what she is doing. Not only me, but the whole team will benefit from this for the next four years.

Has your relay strengthened too?

Definitely, since in Calgary we beat the Polish record by three seconds! It's a nice end to the first starts. We built a team in which to feel chemistry, without it there would be no results. The next step forward with the relay is the implementation of our training plan.

In addition to congratulations from the world record holder at 500 m, you noticed another approach from the rivals?

I am in the lead and they can no longer think that they can remain calm, because even if I start hard, at the end of the run my pace "will sit". They must think how to overtake me, because I can block or drive fast at the head of the stake.

Three of the seven runs this season, so now besides good appearances in individual competitions, it will be important to maintain the position in the overall World Cup ranking?

If I can maintain it, I will be very happy. If not, I will be aware of where I made the mistake and draw conclusions. It all adds up to becoming better in the future.