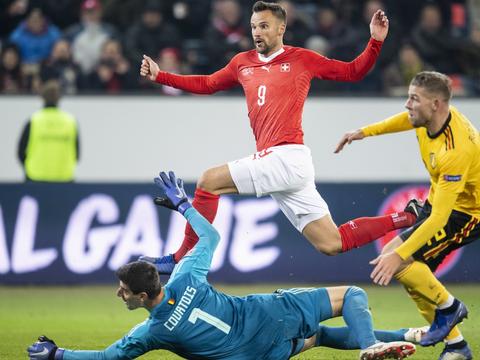 Before the meeting, the Helvets hoped that they would defeat the Belgians and advance to the final tournament of the League of Nations. Admittedly, a draw was enough for the visitors, and even a one-goal defeat, if they managed to score two goals, but the Swiss supporters were full of faith in their players.

At the beginning of the match, the Belgians gave them a cold shower. Already in the second minute a disastrous mistake was made by one of the hosts' defenders, who was jerking in the penalty area, playing the ball directly to the feet of Thorgan Hazard. Belg had no problem to defeat the Swiss goalkeeper and score 1-0 for the visitors. A quarter of an hour later the same player re-entered the list of shooters. The player Borussia Moenchengladbach decided to strike from behind the penalty area and defeated Yann Sommer standing in the Swiss goal.

When the hosts seemed to be in a losing position, the image of the game totally changed. In the 25th minute in the penalty box Thibaut Courtois slipped into a rival and the referee Daniele Orsato, despite the protests of guests, recognized that the Belgian goalkeeper fouled and pointed to the eleventh meter. Ricardo Rodriguez came in close and confidently took a penalty. Five minutes later there was a tie. Xherdan Shaqiri and Haris Seferović shoved the ball into the net from the closest distance after a long play.

A minute before the end of the regular time of the game there was something that no one expected. Edimilson Fernandes played flat on the eleventh meter where Seferović was already waiting, who hit the first ball and placed the ball in the corner of the goal, not giving the Belgian goalkeeper an opportunity to win his second goal in the match. They were coming down to the Szwajcrzy locker room, leading 3: 2, returning from a very long journey.

After changing sides, the Belgians attacked again. Eden Hazard came in great with the ball, he scored from the sixteenth line, but Sommer showed himself on the good side. In the 57th minute with a friend, the hosts had the opportunity to raise the score. At the free kick from just outside the box, Shaqiri decided to go over the bar.

In the 62th minute fans gathered at the stadium in Lucerne exploded out of joy. After the cross from the right side of the field Nico Elvedi with a head hit scored the fourth goal for the Swiss, who were leading 4: 2 at that moment and were one leg in the final tournament.

At the end there was plenty of excitement and both teams created many situations. The hosts showed, however, that they have enormous amounts of ambition and they scored another goal. After a soft strike, Seferović again shoved the ball into the penalty area, who shot Courtois's header and raised the score to 5: 2.

The Belgians were only able to answer the bar of Eden Hazard. The Swiss managed to maintain three goals leading to the last whistle and they, after a fantastic match, managed to advance to the final tournament of the League of Nations.