Mystery of the coral reef 'halos': Strange rings of light-colored material can be seen from space

Mystery of the coral reef 'halos': Strange rings of light-colored material that can be seen from the space could be a sign of reef health, experts say

By James Pero For Dailymail.com

After a decade-long survey, researchers have unlocked some mysteries behind the 'halos' of sand-surrounding coral reefs, and what they might mean for embattled habitats' health.

The so-called 'halos', observable from satellite imagery, are rings of bare sand nestled between the algae and the seaweed that surrounds the coral reefs.

Since the 1960's theories have posited that the halos are created by hungry creatures that live in the reefs.

To avoid exposure from predators in open water, it was thought that sea urchins and fish munch on the greenery selectively using the algae as a shield and carving out paths while remaining covered by the patches that remain. 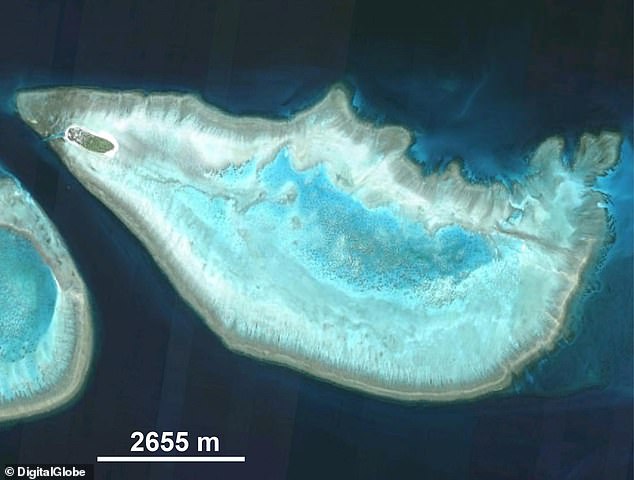 After a decades-long survey, researchers have unlocked some mysteries behind the 'halos' of sand-surrounding coral reefs, and what they might mean for the embattled habitats' health

While that theory was proposed 60 years ago, it was not until now that researchers were able to document this phenomenon.

Elizabeth Madin, assistant research professor at the Hawai'i Institute of Marine Biology and her team set up a series of cameras surrounding the reef of Heron Island in Australia.

What they observed was precisely what was predicted – the theory, dubbed the 'grazer hypothesis' was right.

Researchers saw the specific characteristics of the theory for the first time. Some varieties of fish in the algae and seaweed from the interior, and others – much bigger and less scared of predators – munched on the outside.

Even with those mysteries illuminated, however, others have cropped up.

If the halos were created solely by grazing fish, then halos should be more common where fishing is restricted.

They should also be smaller since fishing preserves large predators, meaning more creatures would be forced to stay inside their algae hiding spots eating the algae.

It's not true, say a tandem of studies conducted by researchers, who plan to study the reefs further in hopes of figuring out the puzzle out. 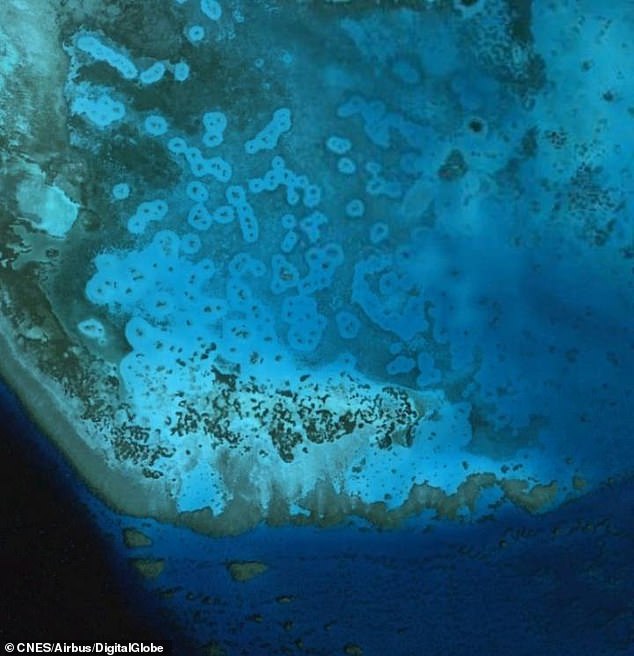 The so-called 'halos', observable from satellite imagery, are rings of bare sand nestled between the algae and the seaweed that surrounds the coral reefs. Since the 1960's theories have posited that the halos are created by hungry creatures that live in the reefs

In addition to illuminating a long-held theory, Madin says that research can also be applied to help judge the health of coral reefs.

Since the halos are at least partially contingent on a healthy predator and herbivore population, they can be used to extrapolate the population of denizens around the reefs that are affected by over fishing and pollution.

For Madin, the discoveries, though exciting, may just be the beginning.

"This will pave the way for the development of a novel, technology-based solution to the challenge of monitoring large areas of the coral reef and enable management of healthy reef ecosystems and sustainable fisheries," she said in a statement.

WHAT IS CORAL BLEACHING?

Corals have a symbiotic relationship with a tiny marine algae called 'zooxanthellae' that lives inside and nourish them.

When sea surface temperatures rise, corals expel the colorful algae. The loss of algae causes them to bleach and turn white.

This bleached state can last up to six weeks, and while corals can recover if the temperature drops and algae return, severely bleached corals die, and become covered by algae.

In either case, this makes it difficult to distinguish between healthy corals and dead corals from satellite images.

This bleaching has recently killed up to 80 percent of corals in some areas of the Great Barrier Reef.

Bleaching events of this nature are happening worldwide four times more often than they used to.

An aerial view of Australia's Great Barrier Reef. The coral of the Great Barrier Reef has undergone two successive bleaching events, in 2016 and early this year, raising experts' concerns about the capacity for reefs to survive under global warming