The majority of Fujimori approved the replacement of temporary teachers Society 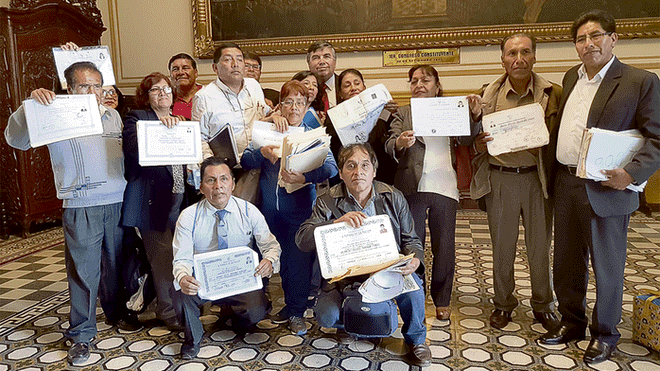 Almost four years after the termination of more than 14,000 temporary teachers (named without pedagogical or professional qualifications), the Education Committee of the Congress approved with a majority of reincorporation of the positions they previously occupied or other vacancies only if they already have the specified document .

This is rejected by Ministry of Education (Minedu), which qualifies him as an attack against meritocracy because it would not be in line with the provision that all entry into the public career had been previously evaluated. It will also affect, as he points out, those who occupy those places with a match.

The figure of the "temporary" created during the Law of the teaching staff (1984), referring to people who were teaching without a pedagogical degree. This measure attempted to cover educational demand in remote areas. However, these professors were transient and had to regulate their entry into the Public Disciplinary Career, accrediting the above academic paper.

In 2007, the Public Career Disciplinary Law required an appointment to be made only through a public competition. In 2012, the Law on Masters Reforms He put two years as a deadline for teachers to regulate their situation and present their title.

At that time, 9,000 people who did not appear claimed that the evaluation was biased and that the state did not abide by the timely involvement of race, although they already had the title. They assured that UGEL did not register their documents.

This is one of the arguments for which the Education Commission recommends approval of this opinion, which grouped four accounts: one multiparty party, one from Fujimorista's Congressman Tamar Arimborgo and the other two lawmakers from New Peru Mario Kanzio and Edgar Ochoa.

They were not the first initiatives. Between 2011 and 2016, another 5 projects were proposed. All were submitted.

This opinion, now in the hands of the plenary session, raises as a condition for proving the title of a professor, but does not set a deadline for its submission.

In this regard, Minister of Education Daniel Alfaro expressed concern and asked lawmakers to reflect on the problem that this project would have caused. "They had more than two decades to show their title and to enter the race. They will seize 14,000 seats for those who prepare examinations every year for selection."

According to Minedo, this number of internships represents 6% of teachers currently appointed (234 thousand). However, the Education Commission said that the actual beneficiaries would be only 5 thousand 614, due to 14 thousand, more than 2000 and more than 65 years, 148 were replaced with Judicial power and others are engaged. Exactly, the latter is also called into question. "On Minedu she says that she is inconsistent with meritocracy, but more than 6,000 interns were hired in 2017 and 2018. Then they had a title. "

In this regard, the sector notes that the interns were withdrawn, because it was not enough just the title, but also to approve the excellent evaluation.

Ramiro Rojas, from the front of the temporary professors, considered the project as many as there are many teachers since 2001. "Minedo had to confirm who owns the title." The sector insists that matches guarantee compliance.

– Martin Vegas, the CNE, says approval of this project is critical and will generate problems with parents and teachers. For Alex Paredes, dean of the teaching college, the laws were misinterpreted by Minedu, and that the places will be filled.

They will discuss the continuation of the registration

– On Commission for Education also discussed initiatives to regulate the enrollment of children who finished 3, 4, 5 and 6 years after March 31 and to extend the school entry deadline by May 31.

– Martin Vegas, from National Education Council (CNE), said that a solution should be sought for 77 known cases of free students, which does not deserve an opinion.

– Lucio Avila, the congressman not grouped, noted that Minedu Turns back on families and that its rules do not coincide with reality.

– Deputy Minister Susanna Hefer He indicated that the date of registration by March 31 is already a flexible one. Commission President Milagros Salazar said that this has already been debated at other sessions and that he will not deserve a law. By vote, it was agreed to see next Monday.