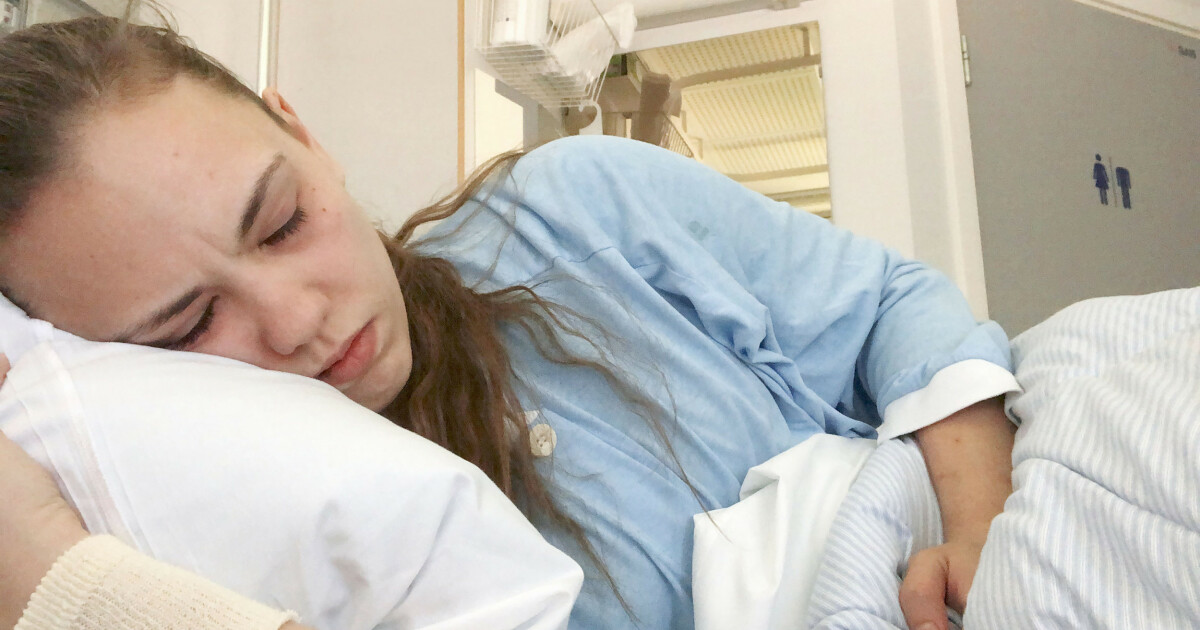 – I was young, scared and I did not know what was happening to my body. Also ignorant were the doctors, who could not find out what was wrong with my stomach.

Elizabeth Meidel (26) from Fleckfjord in Agder had a long and painful journey.

– I was ten years old when I had my first period. It was very early and quite unusual for a girl. “I noticed during the first cycle that I had severe pain and I told about it at home,” says Elizabeth.

She felt that she was not taken seriously, but she thought that she might improve in the next period. That did not happen.

– It hurt just as much. The pain felt strong and I was scared. I was still three years old when I was a teenager, so I felt quite lonely as I walked and carried the pain. My family probably thought everything would go by itself.

Elizabeth eventually told her about the pain from a doctor.

– I was not examined and they told me that the pain during menstruation is common. During my teenage years, the pain got worse and I was seriously scared for my health. I fainted and vomited. This is still the case. When the pain is at its peak, the body disintegrates. I stopped counting how many times I was hospitalized for pain medication.

Elizabeth shakes her head and wipes away a few tears.

– It feels like someone is grabbing the ovaries and wanting to pull them out. It’s like giving birth every month.

Elizabeth was not alone in thinking about what caused the pain attacks. She consulted several doctors who were unable to conclude what was wrong with her body. But four years ago, she was diagnosed at a private clinic after a tissue sample was taken.

Elizabeth has endometriosis – a disease of the genitals that affects women. It is estimated that about ten percent of women at birth have a diagnosis, which means that tissue similar to the lining of the uterus grows outside the uterus and creates painful cysts and bleeding.

The condition causes inflammation in the pelvis, and this often leads to severe pain.

The disease is among the most painful in the world, along with, among other things, heart attack, cluster headaches and appendicitis.

– It feels like someone is twisting a knife around the abdomen and stomach when the pain is at its strongest. From time to time life is put to rest as I roll into the fetal position and wait for the worst to happen.

But when the pain goes away, Elizabeth has to go to the hospital to get morphine.

– It happened several times, although I try to avoid it. Such a strong painkiller can be addictive, but sometimes it is the only way out. Fortunately, this is happening under safe conditions in hospitals, says Elizabeth.

She was relieved to be diagnosed

– Then I finally got a name for what creates curls in my body. There is no doubt that ignorance in parts of the health care system means that more people than me experience severe pain without getting a sufficient response.

– The Fleckfjord hospital really took me seriously. I underwent surgery on my epicondyle, where the goal was to remove some of the endometriosis tissue, but it turned out to be too complicated. Last December, I was given a hormone injection. It should stop menstruating and thus help me have fewer pain attacks. At times it was something better and I will continue preparing the hormones until Christmas.

For the past eight years, Elizabeth has tried to conceive – without success.

– When I finish the hormone treatment, there is a period of two to three months where the possibility of getting pregnant is higher. Some women get better after pregnancy. I know someone went the other way – namely to remove the uterus. I do not like the latter. My biggest wish is to become a mother …

Elizabeth loves children with her great love, Ronnie Andre Meidel (32). They have been a couple for ten years.

– It was mutual love at first sight. We have been together since then, and in 2017 we got married. We tend to say that happiness will be complete when – and not if – we have children, say Elizabeth and Ronnie Andre.

They live in a large house near the waterfront in Fleckfjord.

– Here we have space for an entire football team. We must be able to create life in this house, the children’s dream lives on.

However, the couple is open about the fact that the disease sometimes affects their relationship.

“It’s hard to see Elizabeth squirming in pain without me being able to do anything,” said Ronnie Andre.

“I can feel useless just lying there,” said Elizabeth.

They both pull a little on the smileys.