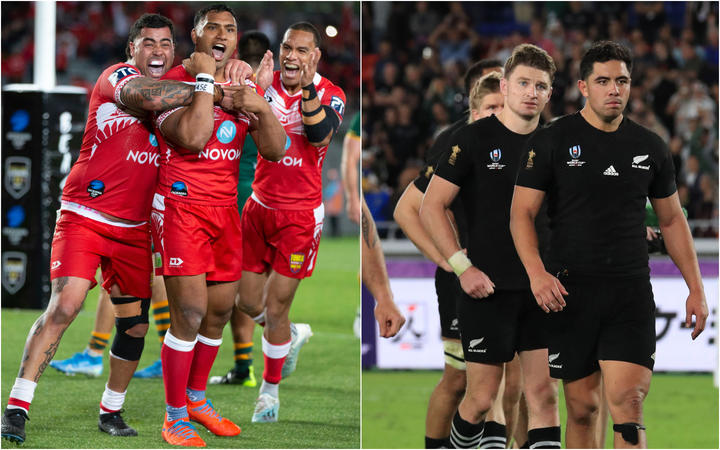 New Zealand Rugby attempted to tap into the team's phenomenal supporter base by staging a game between the All Blacks and Tonga ahead of the Rugby World Cup.

The turnout in Hamilton was fair, but no better than that, suggesting this small sporting revolution has more to do with men such as Jason Taumalolo and Sio Siua Taukeiaho and not just blind allegiance.

Mate Ma'a Tonga, or the Tonga Invitational XIII as they are now known thanks to their national body issues, are one of the greatest things to happen in New Zealand.

Never mind beating Australia at Eden Park on Saturday, or Great Britain the week before that. To see a fanbase mobilized from now on and to watch and hear the way their team support has been truly incredible.

We don't have a great fan culture here. The good folk from Yellow Fever try to generate a bit of atmosphere at the Wellington Phoenix games, otherwise sport in this country is a pretty quiet affair.

Sure, in the halcyon days (or is that daze?) Of the Wellington Sevens, a combination of booze and booming music helped people shed their inhibitions and provide a spectacle for the big screen.

But Tonga fans don't rely on props, or the guy on the Public Address system when their team plays rugby league.

Someone simply starts singing a hymn and everyone else joins in. A hymn! The whole thing is as moving as it is remarkable and it has not been lost on some of our rugby players. The red sea that could be seen at Eden Park for the Tonga vs Australia rugby league match on Saturday.
Photo: Â © Photosport Ltd 2019 www.photosport.nz

Again, it's not just the results that have made this Tonga rugby league thing so special. Nor is it just the support.

It's the fact that this was built by men who were established internationally with bigger teams who said 'you know what, I'd rather play for the nation that best represents me and how I feel and what I believe in'.

A team of true brothers who might not be as talented as the Kiwis or Kangaroos, but who share a culture and bond that other teams can only imagine.

Andrew Fifita, Daniel Tupou, Michael Jennings all played for Australia, while Will Hopoate was a State of Origin representative.

They all loved their experiences with those teams, and were proud of the achievement, but playing for Tonga became something of a calling.

This is what All Blacks' star Sonny Bill Williams is driving at when he says it might be nice to see Māori or Pacific Island faces on the coaching staff.

That's why, if the stories are to be believed, he's considering playing for Samoa should move back to rugby league material. Another former Kiwi, Manly prop Martin Taupau, has already switched to Samoa.

All Black Ngani Laumape was in the stands when Tonga beat Australia 16-12 at Eden Park on Saturday. The son of Tongan migrants, Laumape has the Kingdom of Tonga tattooed on his shoulder and is a former rugby league player himself.

He's also talking about being on tour with the All Blacks in 2017 and how he and team-mate Vaea Fifita spent hours watching and reveling in Tonga's march to that year's Rugby League Cup semifinals.

Then there's halfback TJ Perenara who has spoken of his "shame" at not being bi-lingual and has now begun a "journey" to learn te reo Māori.

These things are indicative of a cultural awakening that many of our professional rugby and rugby league players are experiencing and the rest of us would be foolish to ignore. I've had plenty of advice from people in recent days since the publication of an opinion piece in which I said rugby cannot continue to be a game in which a large proportion of players are brown and those in coaching and administrative roles are white. At least not if you are a happy and engaged workforce.

First, they put 'opinion' on those things for legal reasons. They're actually just a point of view, designed to get people to read and react.

Rugby and rugby league are businesses. Players are commodities with a limited shelf-life. They accept the game is their job and go about things accordingly.

Increasingly, though, they want their football representative to be out of the heart. To, in the truest sense of the word, represent who they are and where they are from.

When Williams says there are a lot of Māori and Pacific Island players in the All Blacks, and that it would be good for the coaching staff to reflect that, he's talking about things like respect and identity. About the background and culture of many of the players being recognized and celebrated.

Mate Ma'a Tonga coach Kristian Woolf is a white Australian. But, as Taumalolo said in a slightly unbelievable speech, Woolf has empowered and supported the players and allowed them to embellish their heritage despite not being Tongan himself.

The next head coach of the All Blacks doesn't have to be Pasifika and maybe not even the one after that. But New Zealand Rugby needs to make sure players feel valued and that their cultures are given meaning.

If the Tonga rugby league phenomenon has taught us anything, it's that some players will eventually go with their hearts and that huge numbers of fans will follow.