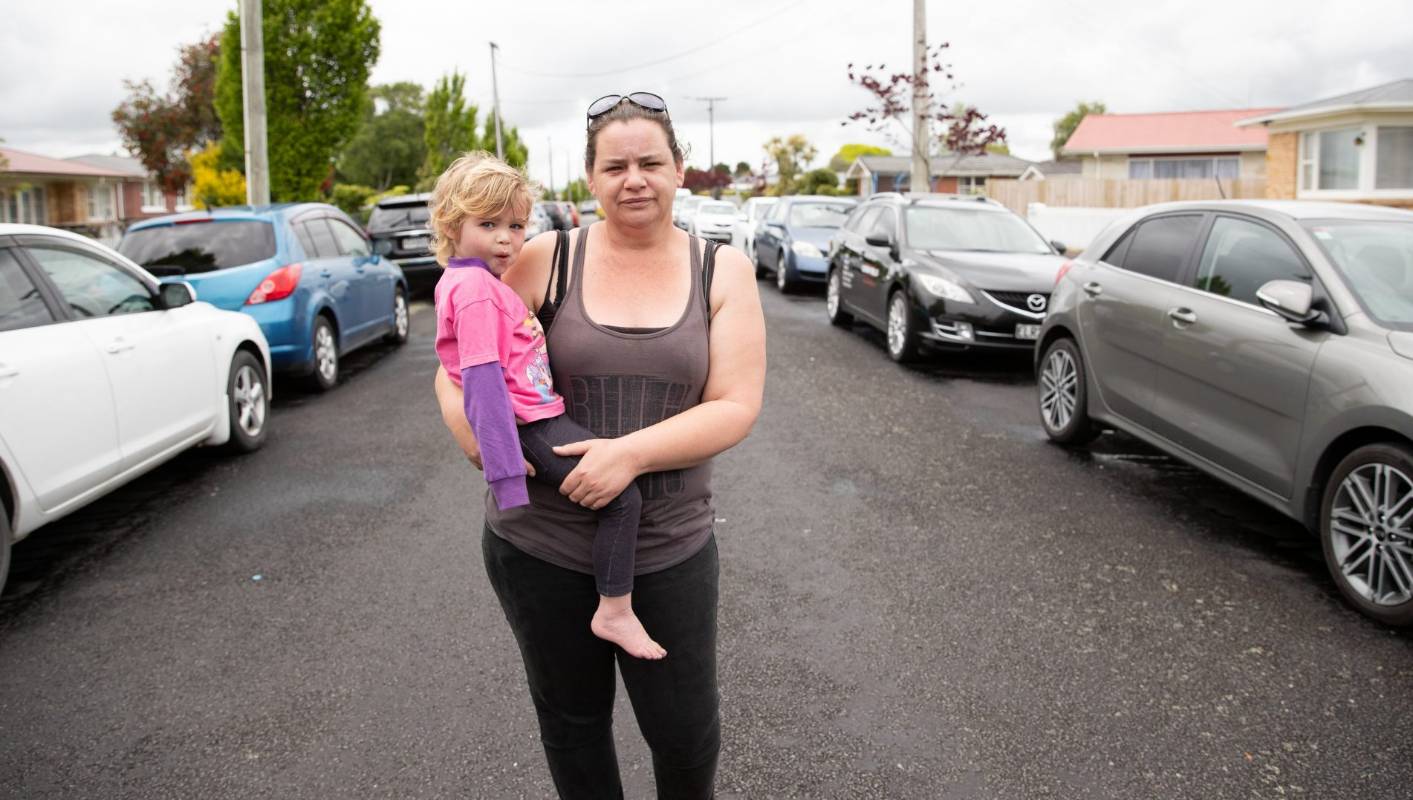 The group of Hamilton's residential street is being blocked by parked cars, because hundreds of IRD employees are moving to a new office nearby.

IRD is aware of the residents' concerns, but claims that the problem stems from the way the staff are parked, not from the lack of parking.

The move took place in October, when 380 employees of Hamilton moved to a new building at Te Rapa Home Straight.

READ MORE:
* IRD can leave the city of Hamilton
* IRD confirms the transition to Te Rapa, Hamilton
* The old Les Mills gym is giving way to the shopping and office complex
* Hamilton companies plan to protest against potential IRD traffic

That's when the problem started, says George, who lives with a three-year-old daughter, Talia Bornman.

He worries that it is only a matter of time before the child or the animals are injured.

The influx of workers changed Cotton Street – which leads to a new building – into a one-way street, she said.

"We really feel we are forced to break through," she said.

Curb parking is so full that recyclers have to park in the middle of the road, she said.

"We had to drive one wheel on the island to actually go down to our street.

"I [drive] slowly, because I'm just waiting for an accident.

"We feel that our nice quiet neighborhood has just been ruined."

IRD Deputy Tony Morris said IRD is aware of the residents' concerns. Free parking is not available at the Hamilton office, he said.

"There is no shortage of parking spaces in the area – parking is a problem.

It was said that the staff had to park six meters from intersections and one meter from driveways. They were also asked not to park on grassy areas, paths, areas "without stopping" or in restricted areas throughout the day.

"We also, today, strengthened this news with the advice of the Hamilton City Council."

IRD will meet with the Council at the beginning of next year to discuss alternatives to driving cars, for example a new bus route, which is due to start in April next year.

The parking enforcement team at the Council received 13 requests to examine parking lots in the area from mid-August, said Urban Transport Manager Robyn Denton. These complaints were about people parked on the side of the road, partially blocking uprights, not parked on the street for residents,

Denton said the Council engaged with residents in various ways, for example asking them to consider where to install sections without stopping.

"Next week we will also send a letter to the residents to inform us about these problems, to provide information about the current situation and to inform them of the actions we are taking.

"We talked to the IRD to ask them to remind the staff who parked in these areas that they must do it legally and ask them for the residents' concerns."

Deputy Mayor Hamilton Martin Gallagher said that worried residents contacted him. He understood that the driveways of some of the residents were partially blocked by parked cars.

This is a "potentially dangerous" problem over time, he said, but it can be sharpened by the recent IRD office movement.

"Personally, I completely feel compassion with the inhabitants where there are many streets that are crowded throughout the day with people working in the Te Rapa area.

"I understand that there may not be an immediate prompt repair … We must review it urgently, in my opinion."

Councilor Mark Bunting, who manages the tasks of Access Hamilton and Parking, said that this is part of a wider issue regarding shopping zones.

"Growth was a matter of this term." I am thinking about the next few terms. [people] they do not try to park across the street, they try to crush our bridges.

"We have to do something radically different, we can not continue to do the same."