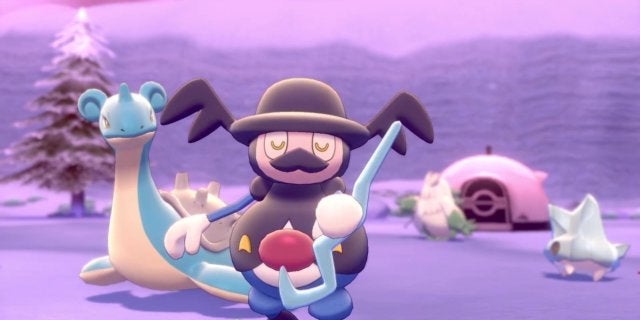 Pokemon Sword and Shield has dropped their final trailer before the game's release later this week, and it shows off two brand new Pokemon. Earlier today, the Pokemon Company dropped a new trailer for Pokemon Sword and Shield, which shows off some of the game's characters and new Pokemon. While we got a great look at the Wild Area and the various gym leaders, fans' attention was on the two new Pokemon revealed in the trailer. The first Pokemon appears to be a ghostly Pokemon that holds various stone shards in front of it, while the second Pokemon appears to be either a Mr. Galarian. Mime or a Mr. Mime evolution.

Pokemon Sword and Shield continues the tradition started in Pokemon Sun and Moon of adding "regional variants" of existing Pokemon species. These Pokemon were affected by their regions' unique habitats and changed appearances and types as a result. While Pokemon Sun and Moon only had new regional variants, Pokemon Sword and Shield also has new regional evolutions – Pokemon that gain or evolve form in certain regions. That's why it's hard to determine whether this Mr. Mime Pokemon is actually Mr. Mime, or if it's a new evolution of the bizarre clown-like Pokemon.

We won't know for certain what to deal with these new Pokemon until Pokemon Sword and Shield comes out this Friday. Be sure to visit ComicBook.com for comprehensive coverage of the new Pokemon games.

Let us know what you think of these new Pokemon in the comment section or find me on Twitter at @CHofferCBus to chat all things Pokemon!