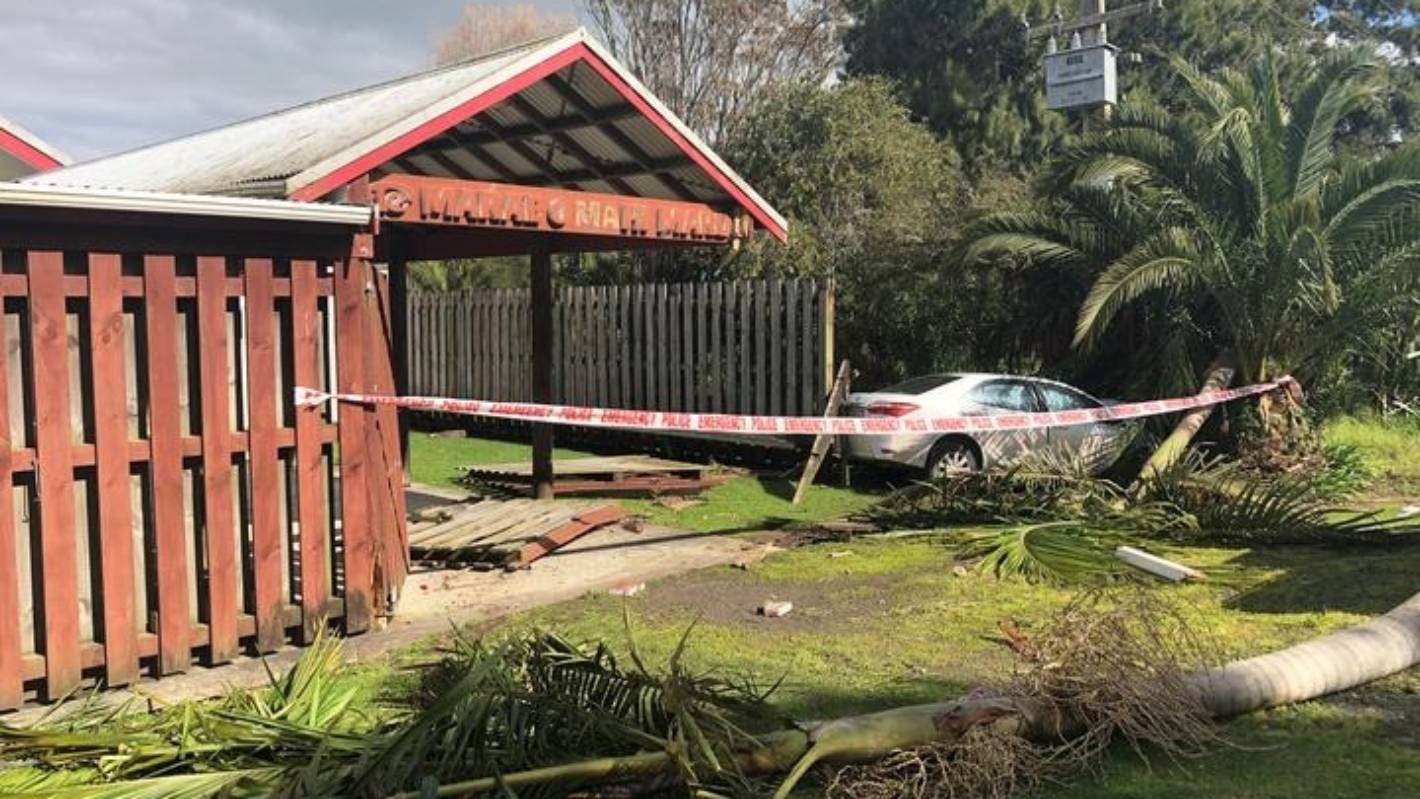 Damage to the Mahimaru marae following the crash.

Iwi in the Far North have renewed calls for the speed limit outside Mahimaru Marae to be slashed in half after crashing into a marae aratea – taking out two palm trees and a power pole.

Ngāi Takoto and iwi's neighbors have been calling for change to State Highway 10 for the last 20 years, and now how much more damage it will take before they are heard.

The vehicle was traveling at 100kmh when it swerved on the road between Tapia and Awanui, and crashed into the fence outside the marae ātea on Monday.

Peter-Lucas Jones said the incident may have been deadly.

READ MORE:
* Court rulings aside, all eyes will be on iwi regarding the future of Mt Messenger bypass
* Most are among the most vulnerable to climate change
* Kiwis should not fear a lower speed limit

"A British tourist ran off the road, demolishing the marae ātea fence, and destroyed part of the mokhau of the tomokanga," he said.

"Had a hui, tangihanga or any other traditional gathering been happening at the marae, lives would have been lost."

He said his whānau, and neighboring iwi Ngāti Kahu, which is 300m down the road, had been calling for the speed limit to be reduced for 23 years.

There were 151 crashes on this stretch of highway between 2009 and 2018, resulting in three deaths and 12 serious injuries.

The Transport Agency said the speed limit was currently under review, and it was considering reducing it to 80kmh.

But the chief executive of Te Rūnanga o Ngāti Kahu, Anahera Herbert-Graves, said she wanted the cut limit to 50kmh.

"We've just had near-miss accidents, [and] several fatalities in that time, "she said.

"When you go through Coopers Beach in Cable Bay you have to reduce it down to those settlements. What the heck is the difference?

"On the stretch of road we're talking about a kōhanga reo, two marae, several ECE home-based centers, fifteen bus stops, children coming and going, [and] we've got our church and urup. "

She said if the speed limit did not change soon, people would take matters into their own hands.

"All we've gotten so far is some double yellow lines, showing kids crossing the roads, as well as speeding back signs. That's it, in 23 years," she said.

"Basically, we've said to them, if we don't, we'll take steps ourselves. Our tamariki have already painted the signs. We're having to put high-vis vests on our children so they'll be seen by vehicles traveling through our settlement. "

Police have confirmed they are investigating the crash, but no charges have been laid.

"We are being treated as invisible. We have to ask ourselves whether a young man or woman would have been treated the same way by just receiving a warning," he said.

"Had this been a school, had it been a non-M gatherori gathering place, the whole situation would have been treated differently."

Herbert-Graves agreed something didn't add up.

"I think the big difference between Coopers Beach in Cable Bay is that you've got a lot of tauiwi populations there," she said.

In the meantime, whānau are set to hold karakia to restore the balance and mauri of the marae ātea.

And they hope drivers will slow down before any more harm is done.