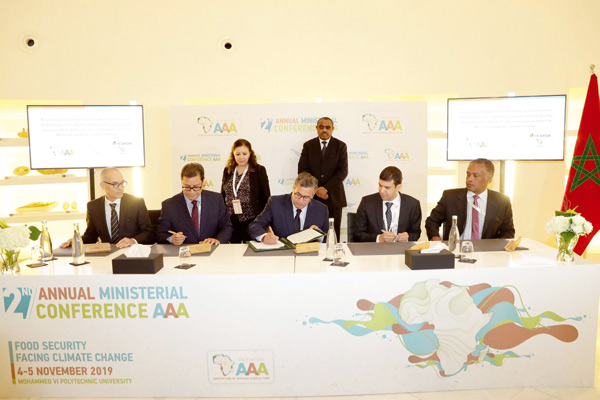 The World Bank is impressed by the results of the Green Moroccan Plan. Two projects under the AAA Initiative will benefit more than 60,000 people.

Morocco counts on World Bank support to accompany the new agricultural sector strategy. The announcement was made by Agriculture Minister Aziz Ahanusch after talks earlier this week with WB Maghreb and Malta department head Cesco Schenczel. Morocco, the minister says, is also seen by the WB as a dedicated and reliable partner, which has strongly supported the agricultural sector and the Moroccan Plan (PMV) since its launch. For his part, the WB chief said he was very impressed by the results of the PMV with investments considered to be the largest of its kind in the region in the agricultural sector, while welcoming the strategic guidance taken thanks to the PMV and the orientations implemented under the plan. The minister's meeting with a World Bank official took place on the sidelines of the Second Annual Ministerial Conference of the African Climate Change Adaptation Initiative (AAA Initiative), held on November 4-5 in Bengaluru.
Ministers and representatives of African governments, international financial institutions (World Bank, FAO, AFDB), donors, the private sector, academia and scientists gathered at this international conference. According to the organizers, 28 delegations participated, including 20 African ministers and eminent scientists. In his speech at this conference, the Minister of Agriculture called for the mobilization of the necessary resources to bring agricultural adaptation projects to the forefront. "The challenges facing Africa before climate change are enormous, requiring a rapid and tangible boost in funding to adapt to climate change for Africa," Akhanush said.

According to the minister, "the adverse effects of climate change pose serious threats to Africa's already fragile food security, particularly affecting smallholder agriculture, food-producing agriculture and the most vulnerable populations." He noted that the cost of climate change adaptation, for Africa alone, is US $ 7-15 billion per year by 2020 and could reach US $ 35 billion by 2050 and US $ 200 billion. here in 2070, even assuming stabilized warming below 2 ° C.

However, the minister assures, “the agricultural potential of our continent is enormous. We must appreciate it for mutual prosperity and it is still necessary for the agricultural sector to be the first employer of our youth. Indeed, agriculture is a vital sector for the continent. It employs 70% of the workforce and accounts for more than 25% of GDP. Faced with this, the challenge of food security in Africa faces a strong demographic evolution. The population is really expected to exceed 2 billion people by 2050, "hence the imperative to boost funding for climate change adaptation for the continent". This is why the Triple A initiative is an innovative and extremely concrete response to the common challenges posed by climate change, the minister said. The AAA initiative aims, in fact, to provide an innovative and concrete response to the challenges posed by climate change in Africa, by mobilizing international knowledge and intellectual and financial resources. Launched and promoted by Morocco during COP22 in 2016, the initiative aims to reduce the continent's agricultural vulnerability to climate change. It features a pragmatic approach focused on promoting high-potential projects for the benefit of African peoples and financing priority projects that are likely to combat the impact of climate change on agriculture in Africa, while ensuring food security for all Africans.

Two projects are being implemented in Morocco as part of this initiative. They are funded by donations raised by the Agriculture Development Agency, as part of its accreditation of two adaptation funds and a Green Climate Fund. The first project addresses climate change adaptation in oasis zones, to the benefit of some 40,000 users. The second project focuses on the development of the organic sector in three vulnerable regions in Morocco (Souss-Massa, Marrakech-Safi and Guelmim-Oued Numn). This project, targeting more than 26,000 beneficiaries, plays a role in both climate change adaptation and greenhouse gas mitigation, and also contributes to meeting the objectives of Morocco's obligations in the region. National Nationwide Conditions (NDC) framework.

The AAA Ministers' Annual Conference, the second edition, held in Morocco, is part of the AAA Foundation's agenda. Created in January 2019, the advisory body is to identify the action programs needed to adapt African agriculture to climate change. The TripleA Foundation, chaired by Aziz Ahankuq, has its ministers as members, eminent representatives of the scientific community, the World Bank and the African Development Bank. Its mission is, inter alia, to defend the cause of African agriculture, to be a force for suggestion to the African public authorities in this regard, to provide assistance, advice, expertise, evaluation, audit and inspection services related to the adaptation of African agriculture to climate change and all related strategic issues.