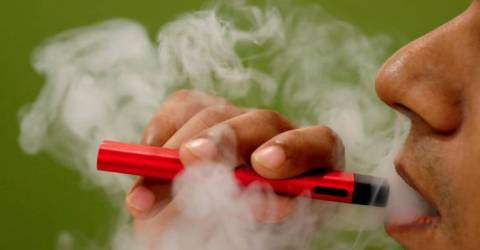 WASHINGTON: Will mint and menthol be included in the upcoming US ban on flavored vaping products?

The industry has been involved in intense lobbying against the move for several weeks, causing discord among health professionals.

After a decade of laissez-faire regulation, President Donald Trump announced last month his administration would soon put an end to the sale of flavored liquids such as fruit or candy to stem the rising tide of youth.

Health and Human Services secretary Alex Azar promised the same day that mint and menthol would also be banned, but US media later reported the government could initially exempt the two because of their use as tobacco cessation aids.

Azar said at the time that his agency would issue rules in the coming weeks, but the Food and Drug Administration, which regulates tobacco and vaping, has not published anything yet.

The negotiations appear to have moved to the White House.

The presidents of two of the largest medical associations went there Wednesday afternoon, they told reporters in Washington.

"The idea that mint and menthol are adult flavors is simply ridiculous," said Sara Goza, president-elect of the American Academy of Pediatrics. "Children use mint toothpaste as toddlers."

"Old enough to remember when we had bubble gum cigarettes," added Jacqueline Fincher, president-elect of the American College of Physicians, recalling the strategy employed by the tobacco industry to recruit younger smokers.

The data backs them up: 64% of high schoolers who reported vaping in 2019 say they used mint or menthol flavors, just behind fruity flavors, and far ahead of candy, alcohol and chocolate flavors, according to the government's annual National Youth Tobacco Survey.

Menthol has been used for decades to soften the harshness of cigarettes, attracting criticism because it conceals their true toxicity. The FDA said last year it wanted to ban the product, which is particularly popular among African Americans.

That debate is now being reproduced in e-cigarettes. Failing to ban the sale of mint and menthol products would signal a "capitulation" to vaping market leader Juul and the rest of the industry, several public health and anti-tobacco organizations recently warned.

According to multiple reports, 80% of Juul's sales come from the two flavors.

Earlier this month, Juul announced it was ending the sale of multiple flavors in the US ahead of the ban. Today, its vape juices come in four variants: Virginia tobacco, classic tobacco, mint, and menthol.

In other countries, it is still possible to buy other flavors such as vanilla, apple, or berries.

Juul, who has been associated with tobacco giant Altria (which also owns Marlboro) since late 2018, and just changed his CEO, is another major player in the sector carrying out studies that will serve as the basis for an application to regulatory authorities.

The FDA has said companies need to apply for approval for all of their vaping products by May 2020.

First, that e-cigarettes are a less harmful alternative to traditional fuels, despite the presence of numerous substances that scientists say require more study and potential contamination by metals from heating coil.

And second, makers want to market their devices as smoking cessation aids, which they are currently not allowed to do by law.

Gregory Conley of the American Vaping Association, which is funded by the industry, told AFP: "We believe moving forward with better, more enhanced regulation is better than prohibition because prohibition does not work."

Prohibition could also lead to a rise in black market products. Cannabis e-juices are authorized by certain states but banned at the federal level.

A mysterious vaping-linked epidemic has claimed 34 lives and sickened more than 1,600 people in recent months, with most users reporting having used cannabis products.

Investigators say no single substance is behind the outbreak, but preliminary work has linked a cutting agent used in cannabis flavorings to lung injury. – AFP