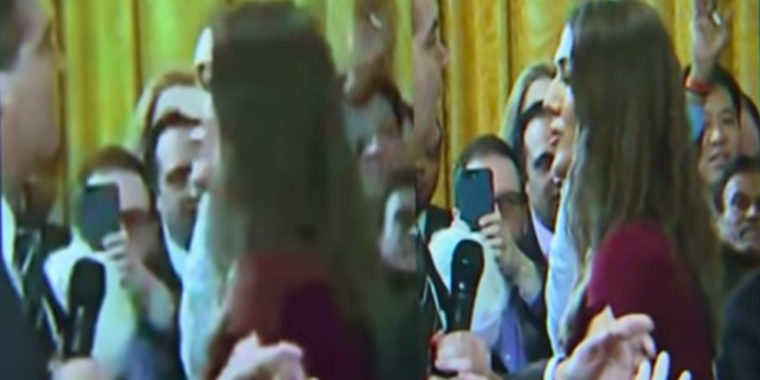 Film expert Abba Shapiro told the Associated Press that he believed the White House had spread the film from the interaction between CNN reporter Jim Acosta and the White House apprenticeship.

In the movie above, Shapiro walks frame by frame through an unchanged clip from the incident and a clip from an incident that was circulating in the White House. The beginning of the clip has additional frames that indicate a change in the slowdown of the clip, and then the actual moment of the event was accelerated so that the actions of Acosta look more aggressive than they were in reality.

On Wednesday, the White House intern tried to disconnect the microphone from Acosta when he asked President Trump questions that the president did not want to answer. Acosta was holding on to the microphone, but how aggressively he held the microphone was in dispute. The press secretary of the White House, Sarah Sanders, accused Acosta of "placing hands" on the intern, although the video made available by Sanders does not seem to support it, and Reuters report next to Acosta says he only saw the reporter holding the microphone.

The White House canceled the Acosta press badge and wrote a video of the incident on Twitter. CNN says that the White House lied about the nature of the exchange. Organizations such as the American Society of News Editors, the Associated Press Media Editors and the Online News Association have demanded the restoration of the Acosta press logo.

The movie has been changed, Shapiro told AP to make Acosty's action look faster and more aggressive when he was holding onto the microphone. Shapiro remarked that the first indicator that the video is not an original is that the sound has been removed, making it easier to change frames. Then, compared to frame by frame, a few extra frames appear at the beginning of the movie, which would be true if the video manipulator tried to slow down the video. Someone could do this if they later wanted to speed up the video so that the clip and its original had a similar length. Indeed, the White House clip appears accelerated during the actual exchange between Acosta and the White House trainee.

"It's like in movies and on television, when you see something, faster action, you feel more aggressive," Shapiro said.

The video producer Jamison Hermann told The Verge separately that he suspected that the clip was made after analyzing the press release of the film and the movie version of the frame by frame.

Aly Colon, a professor of journalism ethics at Washington & Lee University, told AP: "The irony of this film with the participation of the White House with Jim Acosta is that if he is treated, it will turn out that the administration is doing what accuses the information media about doing – engaging in false information. "

Update 10:35 ET time: President Trump told reporters on Friday that the clip distributed by the White House looks different from the original because it was "close-up" and "not treated." The president did not provide proof along with his statement. He added, apparently, that "people do not treat the president's office with respect."