War Commander of President Aung: It is your responsibility to assume great responsibilities not only for the completion of national missions 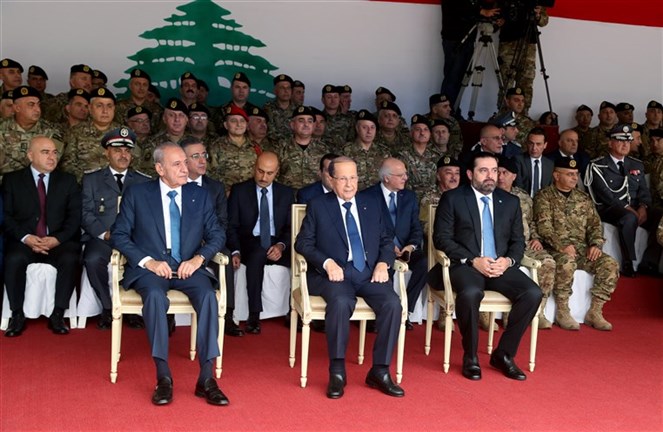 War Commander of President Aung: It is your responsibility to assume great responsibilities not only for the completion of national missions

On the occasion of the 75th anniversary of independence, this afternoon took place in the yard of the Ministry of National Defense in Jarce. The ceremony was attended by President Michel Aun and Parliament Speaker Nabih Barry. , The Minister of National Defense, Yaakov Saraf, the commander of the army, General Joseph Auun, senior officers and commanders of the security services.
Proceedings of the celebration
The ceremony began with the arrival of the Army's flag, then the army commander, General Auun, and the nickname minister, and then Prime Minister Hariri, who arrived after President Barry. At 11 o'clock, President Aoun arrived at the Ministry's office where an official ceremony was held, and then a large number of military units were displayed. On the occasion of the 75th anniversary of independence, the monument was inaugurated under the auspices of the President of the Republic, General Michel Aun, in the presence of the President of the House of Representatives Nabih Berry and Prime Minister Saad Edin Hariri on November 12, 2018. "
After the national anthem, the army commander held a speech on the occasion, which read:
"His Excellency Michel Aun
Speaker of Parliament Speaker Nabih Barry
Prime Minister Saad Edin Hariri
His Excellency the Minister of Defense, Mr. Yacoub Sarraf
Leaders of security services
Dear audience
In these days of 1943, the Lebanese people became rebellious, determined and willing to live freely. Their fight was for their cause and they had what they wanted.
Dear Concert
In this cherished occasion, we fulfill the obligation to fulfill the heroes of what they colonize and are not subject to occupation, to freely refuse humiliation and injustice with courage and to strongly respect the law and justice, raising the name of Lebanon so high that it remains a fortress for freedom and peace.
As far as this anniversary brings us pride and pride in our glory and exploitation, we stop studying in history and drawing lessons. It is true that independence came as a culmination of historical conquests that extended beyond successive generations, but the most important thing remains our duty to end the sovereignty of battles, some of which may be peaceful and other bloody, so that independence will become reality.
Mr. President
Your Government is the responsibility to take on major responsibilities, not just to complete national missions. The march of our homeland in all its complexity created a state, with all the pressures it knew, managed to crystallize the sophisticated model of community.
Therefore, we must protect the benefits and promote, especially the state with its institutions, as the sole guarantor of the continuity and cohesion of society and the security that the military and security forces have hoped to invest in the political, economic and financial sphere to preserve achievements and benefits.
True independence achieves its importance and goal in continuous efforts, believing that what is achieved is only the first step, which increases our confidence, optimism and perseverance in continuing the process of building and modernizing the institution, which started and will not stop due to your support. Other institutions.
I can not point out that the positive steps we have taken have found their thinking and expanding the intense efforts and achievements that have been achieved at the external level. We received trust, appreciation, admiration and unlimited support in all areas.
You soldiers
On the journey of seventy-five years of the life of the homeland, what you have forgotten one day are always interested in meeting the call when called duty. Faithful to your department and comrades carries the amount of the size of our country, and the dreams of our people, and the passion of our dignity, they deserve the certificate registered names in the record of immortality.
Your people today look with pride and pride when they defeated terrorism with their military personnel and destroyed the infrastructure of its security cells, while your eyes remain the southern border where the enemy is the main enemy.
Victories that require us to be more dangerous in terms of regional developments with their internal consequences, in parallel with the release from the burden of the difficult past in the process of promoting the institution, your future and the future of your children. "
Thereafter, a military parade was held at the event. Then, three statutes of the President of the Republic and the heads of the Council and the Government were presented, followed by commemorative photographs, and on that occasion a cocktail was held.