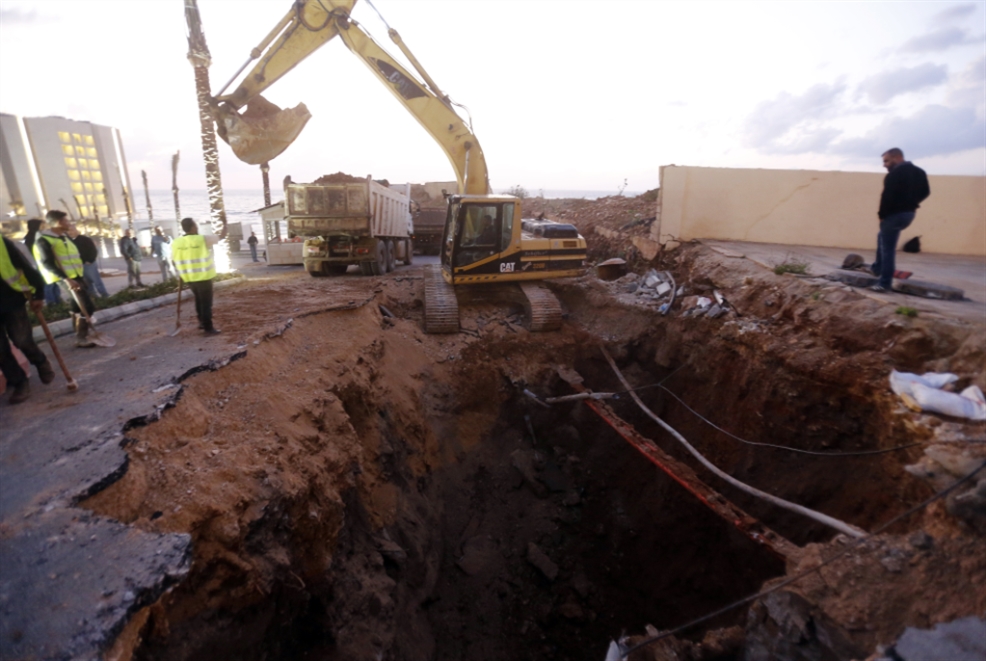 Yesterday Ramleh al-Baida streets passed through the facade after the flood flooded the side of the road and fell like waterfalls on the other side. Reason? The businessman, Wissam Ashour, closed the main carpenter at the Corniche in Batoun, just before the opening of his ministry in Beirut sea. This took place under the patronage of the Governor Beirut and the Development and Reconstruction Council, as well as before the police and part of the commune, but hiding the scandal did not last long before the rain, and all the perpetrators were ready to return to the popular pool!

The Beirut commune wants its council and governor to stick to the capital with its "identity and style". Capital, Zeina has 2 million dollars and organizes multimillion festivals and marathons. To this end, Mayor Beirut, Gamal Itani, did not hesitate to touch his hand on the table, and some participants passed a two-million meeting, when a member suggested that "decorations will be replaced with school help for needy children". Al-Rayes hit the table with his hand, saying: "Beirut must be decorated." Of course, the decorations of the day were more important than any secondary problem, such as sewage systems ending in the sea! That is why the city council and the governor, Ziad Shabib, have not calculated that the image that will precede the festive picture is a "feces" along the Ramleh El-Bayda corniche. Some may think that this is an exaggeration, but what happened yesterday is a flood of wastewater and its outflow from the "rivers" in the form of a fountain to spread feces all over the Corniche, and sometimes take the form of waterfalls … dirt!
Some may also say that the above is more than normal and repeated every year when it rains. But many do not know that the reason behind the closing of the regatta is the work of Wissam Ashoura, the owner of the well-known Eden Bay building, which is now a resort on the Ramleh El Baida beach. Before opening his ministry at the end of June, he wanted to make sure that the view of the hotel from all sides was complete and beautiful. Workers from Beirut, the municipality, the governor and the Council for Development and Reconstruction (CDR) threw two tons of concrete into the main white Ramgar al-Ramel to hide a narrow view of the sandstone of the beach.
During the session called by the Shabib and the representative of the Development and Reconstruction Council (responsible for the sewage network in the Beirut area) and the Suburban Communes, represented by the municipality of Ghobairi, the Plan required that the channel be directed to the San Simon station, where the poor, whose voices will not hear, they will be returned to everyone, and dirt will be sent back to Ghadir station. But the audience has abandoned the idea that the San Simon station is not working, and therefore can not absorb the sewage reaching it, or the possibility of pumping to another station. As the sewage smoldered in the devastated San Simon district, and the protests grew, the mayor of Ghubairi asked to return the situation just before the opening of the Eden Bay building. However, Ashour refused the request of the municipality of Ghubairi, and the Beirut commune protested against the refusal and was transformed into a suburb near the «Grand Café». In this way, Governor Beirut, her commune and Development and Reconstruction Council (CDR) were able to satisfy a wealthy businessman at the expense of thousands of Lebanese who stuck in their cars yesterday as a result of preparations for Independence Day … and flooding the Corniche stool!
Shabib, who had previously secured the shield for Ashoura to close the bulldozer, decided yesterday to continue this "game" and issued a statement in which he announced that the Engineering Directorate in Beirut would conduct a technical and engineering investigation into the causes of flooding the sewers in Ramleh El Baida. Shabib started an investigation with him? About two months ago, Governor Beirut asked to open an investigation to find out who allowed the General Public Security Directorate to drill down land belonging to a forest in Beirut, while he himself agreed to occupy a part of the property in 2015. Issue a report recommending the destruction of the illegal Ashoura building without giving it importance to the governor. Vahour managed to build his plant thanks to a license obtained from Shabiba, and his resort was opened later in the eyes of "people of the state" without obtaining a permit for housing and tourism. Now the Lebanese state spends a lot of money to reopen the guard and change the "holes" and start digging again.

Ramla shafts were directed at the San Simon station, which did not work, and the unpleasant smells of the residential area were damaged

Al-Akhbar, in an interview with Al-Akhbar, was responsible for the events related to violations on the beach of Ramleh El-Baida and the closure of the Batonun regiment to the Governor Beirut and Itani, saying: "My words as a message for inspection and accusation of having two men" .
The statement was not left alone because the municipality quickly met halfway through an extraordinary session entitled Itani and its main topic to discuss the issue of sinking in Beirut. However, no one knows why the meeting was called an "exception", as long as the first rainfall took place for about a month, without preparing any of the scared in the capital and without dealing with Regar. The meeting was held and it was decided to approve the administration's request "for a detailed investigation of the flooding of sewage and rainlines in Beirut, in particular on Rafik Hariri's Prime Minister's Avenue, which is the result of the main sewage system, which also falls after it turned out to be concrete dam". The resolution also recommended that "the identity of persons who did these acts and partners and those who failed to prosecute them was examined before criminal courts". A member of the commune, in contact with the News, carried the governor of Beirut responsible for what had happened, claiming that Shabib was one of the Ashou, he gave the green light to continue to violate. He added that "President Saadi Hariri advised the municipality to break the Regar and refer all those who appear to be responsible to the judiciary." This is in the light of the silence of the central inspection, which received information from Wadih Aql's lawyer regarding the construction of the Gulf of Eden without moving his finger.