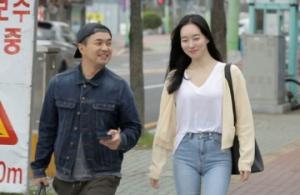 According to 18th TV Kosun, Jeong Yeong-unun and Kim Yu-jii have developed a real love affair through the entertaining product "Third: The Taste of Dying". The two were recently photographed in a shopping center in Hanam, Yeeonggi-do. Jung onun was not aware of the surroundings, such as kissing after hugging Kim.

Kim Fu-Chi made her debut with the 2017 drama "Kim Bok Oooo" and made her face in 'Molo Colic' that year.