Police have raised suspicions that there is an alleged commentary on Naver, as the owner of the so-called "Hye Kyung Palace Kim" (@ 08__hkkim) announced his wife, Kim J-Kyung,

Kim Jie-gue, a member of the National Committee on Civil Proceedings, said on the 19th that there were 1955 comments written by Kim, which should be owned by Kim. They claimed that the Naver-ID "ljmkhk631000" (the nickname of the songs) seems to belong to Kim. This ID was withdrawn in April.

The netizens analyzed that the identity card was a combination of the governor's birthday (October 1963), followed by the English name of governor and wife Kim. The Internet ID used by Li Je-Myun's office is mainly "ljm631000". The police have reported that Twitter was the wife of the branch, revealing that the last point for accessing the next ID card was the home of the branch. 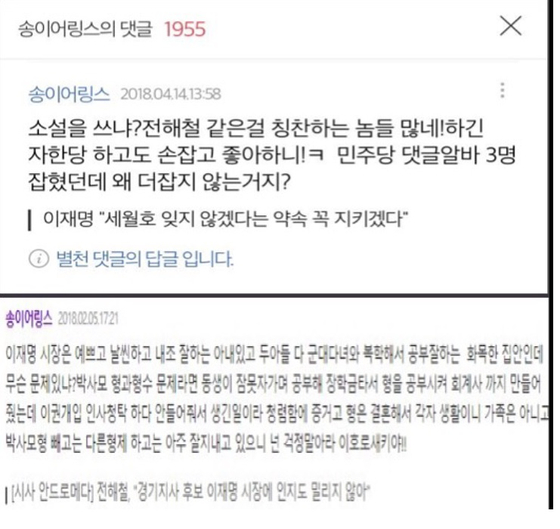 Most of the comments written by Naver ID, supposedly belonging to Kim, are actively supported by Lee and his wife, Kim He-King. I actively refute and abuse the bad comments of two people. Among the comments of the netizens, "Li Jie-mieong is a clean and good politician," "Li Xie-mieong is a beautiful, thin, well-wounded wife, and both sons return to military service and return home. They look younger."

The ID card is aimed at people who make bad comments about Li Je-Myung's office. "I'm trying to kill people because I'm afraid of Li Je-mi, by curving, deception and manipulating the rights of Korean fertilizers. They are supporters of those who want to play with them and fight evil spirits and to run like crazy people. " Regarding former Democratic Party MP John Seoul-Chel, who at the time was the rival of the governor, he said: "There are many people who praise the election. I would like to go hand in hand with my friends."