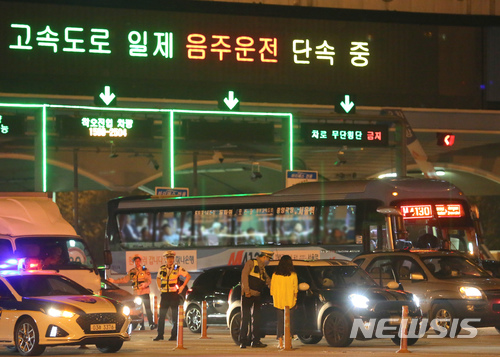 By reporter Jae-hee Lim Jae-hee, Yoon Chang-ho (22), the driver who was on vacation in Busan, he was killed and killed, which forced the sanitary authorities to strictly ban drinking alcohol from alcoholic beverages. I went out.

In addition, one of the six juveniles experienced drunkenness and decided to designate facilities for children and young people as an area of ​​Jinju to improve drinking-related behaviors that did not improve and announce a "drinking recommendation".

According to the statistics of the National Statistical Office (NSO), the number of alcohol-related deaths last year was 4809. 13 people lose their lives because of alcohol every day. Social spending, such as medical expenses and loss of productivity, is 9 452.4 billion, more than 2 trillion won more than smoking or obesity.

However, 36.2% of respondents answered that they can get drunk and the culture of tolerance for drinking is spreading.

The Ministry of Health, Welfare and Family Affairs, together with the management from medical, medical and advertising organizations as well as youth and consumer organizations, organized in February this year "Council for Environmental Improvement of the Promotion of Coke" and implemented preventive action plans reflecting the results of a public opinion poll.

In this plan, it is noticeable to strengthen the standards of alcohol advertising.

The Ministry of Health and Social Care changes the main standard of advertising defined in the executive decree of the Act on Health Promotion in the National Act. To deal with new media environments, such as real-time broadcasting (IPTV) and social networking (SNS), and to strengthen rules to tobacco levels.

In the amended act, alcohol can not express "drinking" in alcohol advertising. Direct drinking, as well as the alcohol drinking scene, stimulation of drinking can stimulate the decision to ban.

It should also be noted in the advertisements that alcohol warning signs such as "alcohol causes carcinogens and excessive alcohol cause cancer of the liver and stomach cancer", which are marked only in alcoholic beverages.

As with cigarette ads, ads can not be sponsored when sponsoring corporate events in the alcohol industry. Advertising prohibited modes of transport and devices are now extended from urban railways to airports, ports, cars and ships.

The regulations on alcohol advertising are also used in large foreign countries. A ban on a 25-year or younger model or target of youth is commonplace. In France, alcohol can not be advertised on TVs and theaters, including websites used by young people, and Norwegian countries such as Sweden, Norway and Finland limit alcohol advertising.
In addition, public institutions, medical institutions and facilities for children and young people are referred to as the Jinju area. Alcoholic beverages and alcoholic beverages are prohibited in public buildings, medical facilities, public health centers, libraries, kindergartens, kindergartens, elementary schools, middle schools and high schools as well as in facilities for young people. On the primary, middle and school playground, you can drink only when the managers of public places, such as events in the village, consider this an exception.

Public parks, such as city parks, will be designated on the basis of local government regulations in order to be able to operate in accordance with the characteristics of local self-governments.

The Ministry of Health and Social Care develops and disseminates drinking advice to change drinking behavior.

Based on shochu and beer, we propose 7g of pure alcohol in a glass of liqueur and develop a recommendation to drink with 7 or more glasses a day and 14 or more glasses a week. In the future, we plan to introduce a system that displays net alcohol content in units of g in the main container.

In November last year, they developed the "Drinking Media Guidelines" for drama and entertainment programs, but alcohol scenes are still broadcast on average in one episode per episode. According to the Korea Institute of Promotion and Health Development, drinking at the synagogue is 0.9 times in 2016, 1.1 times in the last year and 1.0 times in the first half of this year.

The Ministry of Health and Welfare works with consumer organizations to comply with the guidelines and compiles the results as a case study aimed at triggering an independent adjustment.

By 2020, we will continue to cultivate supporters who will train 3,900 students a year, 500 students. Development of programs and content of juju for young people, which can be used by school teachers, as well as promotion of education of youth for juxtapism through linking with school health and education about quitting smoking. To this end, we will train about 550,000 people each year, the Advisor developed a "guidance guide", which can be used by health center employees and decided to use educational counseling.

Provide the legal basis for the treatment of addiction and rehabilitation to improve the community's delivery of alcohol. We will develop an integrated poison management support center that will install one site in an urban area with a population of 200,000 or more and develop a hospital-based addiction management model. Establishment of the Addiction Team at the Provincial Center for Mental Health in the province to strengthen links between centers.

A 15-person counselor who works in Seoul once or twice a week, an Alcohol Addiction Advisor, conducts a training process to spread matters across the country.

In the future, the government will set up a "Committee on the Prevention of Bleeding to Improve Relations with National and International Organizations, such as the World Health Organization (WHO). development (R & D), such as alcohol prevention and management technology.

The action plan makes contact with the World Health Organization (WHO), the World Drug Prevention Strategy (SAFER), which was recommended by the WHO on 28 September to prevent and combat alcohol misuse. The SAFER project will focus on reducing alcohol availability, strengthening measures to prevent drunk driving, increasing access to alcohol treatment, banning alcohol advertising and sponsorship, and raising alcohol prices through tax and pricing policies.

"We will do our best to reduce alcohol-related harm and protect vulnerable groups, such as adolescents, through measures to prevent alcohol drinking," said Kwon Deok-chul, deputy minister of social welfare.