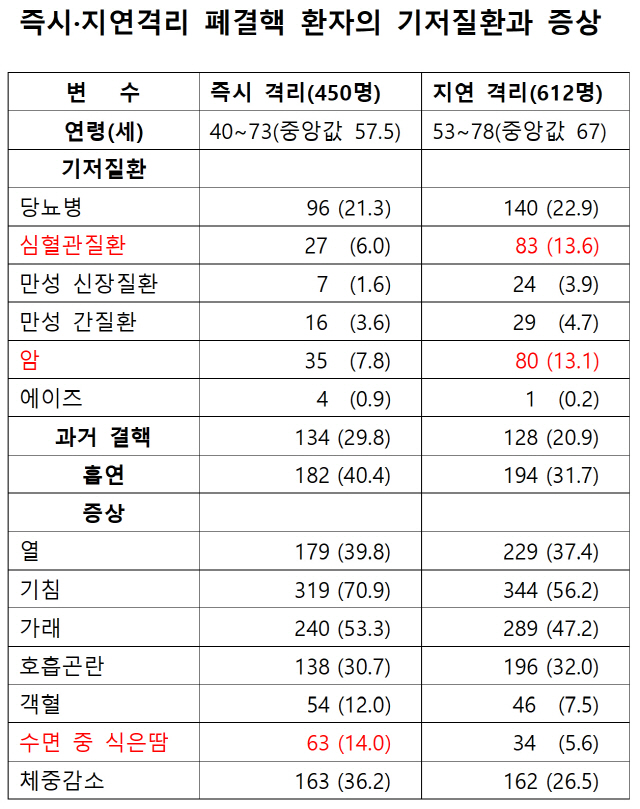 The reasons for the delayed isolation were that the patient visited the department of non-respiratory or infectious medicine or showed no symptoms of tuberculosis. The older patients are, the more likely they are to postpone isolation because they show no symptoms of TB, such as coughing, dyspnoea, and cold sweating during sleep. In particular, the rate of cancer patients in the delayed isolation group was 13%, 1.7 times that of the immediate isolation group (7.8%). Patients with cancer have an increased incidence of tuberculosis due to cancer or chemotherapy, and their radiation findings may be similar to pulmonary tuberculosis or immunosuppressive patients, which may lead to delayed retention.

On the other hand, those who were immediately quarantined have been well established in the past with tuberculosis or suspected pulmonary tuberculosis symptoms, such as cold sweating during sleep.

The incidence of tuberculosis in Korea is 70 per 100,000 and mortality is 4.9, the highest among OECD countries. Last year, 45.5% of newly diagnosed TB patients were 65 years of age or older, more than twice as many as 10 years ago (27.5%). In the elderly, patients with tuberculosis may have no obvious symptoms, such as coughing, cold sweating and weakening, which may delay diagnosis and isolation.

The findings are published in a recent issue of JKMS, published by the Korean Medical Association.

Tuberculosis varies depending on the site of the disease, including the lungs, pleura, lymph nodes, spine, brain, kidney and gastrointestinal tract. Tuberculosis of the lymph nodes can cause symptoms such as systemic symptoms, lymph nodes in the neck and underarms, pain and tenderness, spinal tuberculosis, back pain and tuberculosis meningitis, headache and pain.

Lung tuberculosis is a chronic lung infection caused by Mycobacterium tuberculosis and its symptoms are often difficult to distinguish from colds, other lung diseases and smoking-related symptoms. Respiratory symptoms include coughing, sputum, hemoptysis (vomiting), dyspnoea, chest pain and systemic symptoms such as fever, cold sweating, weakness and weakness, nervousness, anorexia, weight loss, indigestion, and loss of concentration. There is this. If your cough or sputum lasts more than two weeks, you should get a TB test.
By Im Woong-jae, staff reporter jaelim@sedaily.com