Home / korea / 120 minutes as a fan meeting… No question on outs or clear answer- Chosun.com

120 minutes as a fan meeting… No question on outs or clear answer- Chosun.com 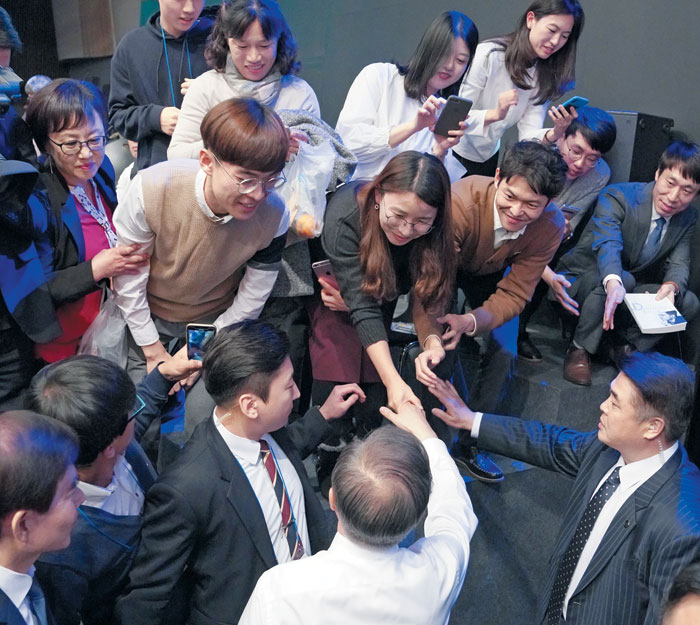 President Moon's "Dialogue with the People", which took place from 8 pm to 7 pm, was conducted in a town hall mode where 300 panels of people without a fixed script were asked. The panelists raised dozens of hands to ask each other questions, saying, "Me!" "Here!" He cried competitively. Because the hall was upset, host Bae Gul-su, the hostess, asked to refrain from saying, "Please keep your order." Among the questions, there were many questions like "Make This Country" and "Meeting the President's Old Tears." Failed to allocate time, the question was much longer than Moon's answer, repeating the planned 100 minutes. In real-time YouTube commentary on this, "It was a direct conversation" and "the president and supporters beat the drums and ended." “.
Moon appeared on stage in a blue suit. On their chest they carried a badge for the ASEAN-Korea Special Summit and wore handmade shoes made by deaf people. The song "All You Need Is Is Love" by the British rock band Beatles. Presenter Bae Sheol-sou chose this song because "I am out of politics, but I felt that the most necessary thing in our society was love."

"The panels can be rolled out," Moon said. "The staff did not set an outside schedule to prepare for dialogue with the people, but there was no expected problem and the scope of the question was left to an endless round." But there were several "duck questions" that embarrassed the president.

The first questionnaire was selected by Moon. The person holding the microphone is Kim Minkik's mother who died in a car accident in a child protection area (school zone) in Asan, Chungham, saying: "I ask the president to help children reach a safe country." "I think it is sad that various bills for the safety of the lives of children have not yet been brought by the National Assembly," he said. When she referred to the former prosecutor, she sighed and opened her arms to explain to the Criminal Investigation Office. Host Bae Gul-Soo also discussed health with President Moon, who was born in 1953. Asked about the panel on health problems, Moon responded: "The intensity of labor is not a horse." "I get angry when I'm angry, but I'm more stressed out because I can't express everything."

Respondents were diverse, including people with disabilities, multicultural couples, deserters and chicken owners. However, I ran out of time and got only 20 questions. Most of the 300 panelists did not receive a question. In the process of selecting the last interrogator, the overheating scheme led him to choose the farthest one. One panel also expressed the sadness of not getting a vote. Sensitive questions such as the Hong Kong demonstration and the forced return of the deserters appeared on the screen, but Moon did not respond.

Immediately after the broadcast, 300 panelists gathered on stage to photograph President Moon. "I love you," "I take a picture," as I said. Host Bae Sheol-Soo said: "This is the first time the program is in progress, but it seems to be three years older."

In the public dialogue, more than 16,000 applicants gathered, and the national panel competition was 53: 1. The seats were arranged in a circular fashion, with the Moon in the middle. The number of YouTube viewers has also reached 250,000.