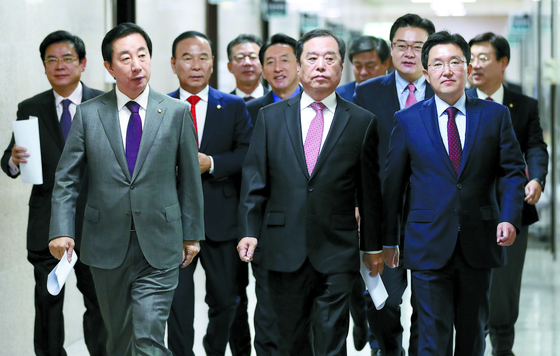 Party leaders such as Kim Byung-joon, chairman of the Korean crisis management committee (center) and Kim Sung-tae (left), take part in an unconventional meeting that took place 19. Kim criticized President Moon for "multiple, deliberate and thoughtful planning and handing over the National Assembly "and declared that he would hold a regular dietary session. [임현동 기자]

The Solidarity Solidarity Lawyers for the Democratic Society and Democratic Society demanded that the National Assembly suspend the flexibility of the work period. They will organize press conferences with Justice National Lee Jung-mi from the National Assembly and said: "Extending the flexible workers' system will completely deny the amendment of the Labor Standards Act to shorten working hours and tighten working conditions." The GNP result was not a "resilient society" "but a" society that abolishes the labor force ".

They said: "Extending the period of flexible work unit reduces only user costs," he said. "If you include overtime, you can work up to 64 hours a week."

The opposition of the labor movement against the expansion of a flexible labor market falls on the same day as the participation of civil organizations, such as Solidarity for participation. Because the Jinbo camp and the Moon Jae-in government may be further from the administration, the passport is concerned. In addition, a Democratic Party official said: "Regulatory innovation and job creation are urgent for the success of Moon Jae – in government, and trade unions close to the current government are opposed." This is the basic position of the government and ruling party that is being taken to extend the flexible working period from the current three months to a maximum of six months or a year, they take into account the economic slowdown and burdens on enterprises.

In addition, the leader of the Democratic Party called the Korean Confederation of Trade Unions (KCTU) the National Assembly this afternoon and organized a "high level council". Both parties, however, stated that there are no results yet. During the closed hours of meetings, several issues related to work were discussed, but the atmosphere was cold. Kim Joo-young, chairman of the Federation of Korean Trade Unions (FKTU), who was in the National Assembly, said: "It can be difficult." When the debate is delayed, the National Assembly asks for the possibility of enforcing the law, saying: "Then you will have to turn everything around and go to extremes."

Earlier, KCTU received a request from a representative of the Democratic Party, Lee Hai-chan, last month for membership of the Economic, Social and Labor Committee, trade union membership, society and government. And extending the period of flexible employee system. The trade union plans to organize a general strike on May 21 and take part in the People's Congress on December 1. Prime Minister Lee Nak-yeon said: "Rallies and protests are rising, and it is expected that they will last until the end of the year." He said: "Please cooperate so that rallies and demonstrations can be carried out under the law." The official of the passport authority said: "In government Roh Moo-hyun was a precedent that we fought with trade unions, but we were not able to win. This time, the two-track strategy is to use the whip and carrot together," he said.

Conservative and progressive camps raise their voice. On the contrary, in the Justice and Development Party, "the government blames KCTU and harshly engages in work" (Lee Jung-mi, CEO,). He demanded a claim. Cheong Wa Dae decided to open Cheong Wa Dae on the 22nd.