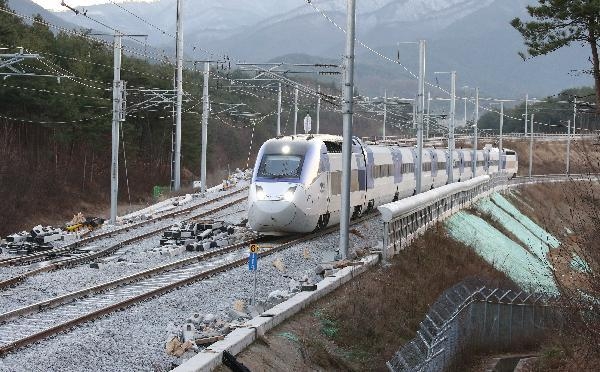 Fair Trade Commission Bids for Bid on Road Construction on Wonju ~ Gangneung Railway Hyundai Engineering & Construction (000720), Korea Development (004200)The government is reported to be pushing for sanctions against 10 construction companies. These builders are suspected of giving and receiving bidding information while bidding for a high-speed rail project commissioned by the Korean Rail Corporation. Industry estimates that the penalties imposed on these companies will amount to tens of billions of wins.

According to the construction industry and the legal profession on the 12th, the CPTK last week sent a review report to Hyundai E&F and Korea Development Corp. that it would cite sanctions related to bidding and fixing Wongju-Gangneung railway construction on 6 and 8 on the agenda. .

The FTC concluded that Hyundai E&C and Koryo Development, bidding for Wonju-Gangneung Railway Projects 6 and 8, commissioned by the Korean Railway Authority in January 2013, exchanged bidding information in order to reduce the bid price. The fact is true about collusion.

Ten companies, including Hyundai E&C and Korea Development Corp, participated in the bidding for this construction and selected the combination '' Inappropriate type of work '' by batch, and exchanged information on '' Inappropriate combination of work type '' specified in each group with other groups. Inappropriate work is a measure to prevent "low order" orders, in which the winning bid is too low because of the lowest bidding system. Of the 30 separate parts (building item) for each tool, if the amount of investment for a particular job is less than 80% of the cost of the basic work, it is determined as ineligible.

The exchange of this information has the effect of keeping the bidding prices of the companies involved in bidding on inappropriate type of work. There is a limit to the possibility of lowering the offer price for the railway in Korea.

For this reason, the FTC announced that construction companies together decided on the inadequacy of any competition restriction tool. If the information was not shared, bidders who had to be eliminated from the Phase 1 review may continue to participate in the bidding. In addition, the FTC believes that it has distorted free market price competition by diverting prices to a certain extent.

The KFTC is said to have sanctioned all eight construction companies that won the construction of rail sections no. 6 and 8 of Wongzhou-Gangneung and eight companies that participated in the bidding. Industry estimates that the penalties imposed on these companies will achieve hundreds of wins. However, since the bidding for this building took place in 2013, it is reported that criminal law will not be filed under the statute of limitations (five years).

This case was followed by Hyundai E&F, which had offered fixed offers on four tools (Tools 2, 3-1, 3-2, 4) from the Wongju-Gangneung Rail Road in April 2017. Heavy Industries and Construction in Shanjin (097230), Heavy Industries & Construction Doosan (034020), KCC Construction (021320)It was presented at the plenary session with the incident of imposing a $ 70 billion penalty.

In the case of bidding for the second, 3-1, 3-2 and 4th bidding, the plenary session, which serves as the FTC's judicial committee, proved to be a co-operation. It's hard

Accordingly, the FTC Secretariat reportedly conducted a new economic analysis to strengthen the investigation into the collusion of the sixth and eighth construction projects for the past two years and to prove restrictions on competition. This is to overturn the judgment at the plenary that the sharing of information by inappropriate unions to the 6th and 8th companies had no direct effect on the successful bidders, the bidding rate and the bid price.

An industry official said: "The construction industry is considering what decision the FTC will make, which we thought two years ago would not be able to prove direct competition restrictions just by sharing bid price information."