Arema vs. Perseru Prediction: there must be three points 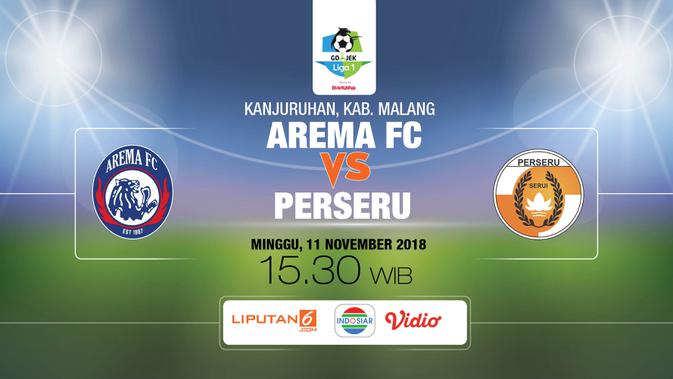 Jakarta Arema FC and Perseru Serui will play at Kanjuruhan stadium in the 30th week of Gojek League 1 match with Bukalapak on Sunday (11/11/2018). Arema is still in the shadow of degradation, while Perseru is still trying to get out of the most developed position.

Arema FC is currently in 13th position with 38 points from 29 games played. Arema has only five loss points PSMS Medan and PS Tira, who are in the relegation zone and six points ahead of Perseru Serui, who are in the bottom of the classification.

These conditions mean that both teams do not want to be down. Arema does not want to leave only a few games that have to take the risk of being down. Meanwhile, one point difference from Sriwijaya FC, Medana PSMS and PS Tira, forced Perseru to motivate himself to score points in Malang.

Speaking of the player's material, Arema FC is actually better, especially since the match takes place in Malang. However, Aremy coach, Milan Petrovic, seemed a bit worried. As usual, he instructed his people to shoot faster in this match.

"This match is certainly not easy, and the team that is below us really struggles for victory, I also said that Perseru has the power and speed typical of the Papuan squad", said Milan Petrovic.

Meanwhile, talking about the competition between the two teams, Arema always won in the last two games, both in the first round of League 1 matches and in the trial match. The hope of returning to victory is certainly in the hearts of Arema players.

However, the situation is not easy at the moment. Apart from Aremania's support, the Singo Edan band did not have the right number to stand on the frontline, replacing the role of Dedik Setiawan, who was called to strengthen the Indonesian representation in the AFF Cup in 2018.

However, Arema's assistant, Kuncoro, did not question the matter. It is important for him that Arema players who appear on the pitch can work together to be able to quickly score goals in the match.

"The question of the front line I hope other players may be the solution, you must have a quick target, and when the attacker has a strong shield, the midfielder must appear to break the deadlock," said Kuncoro.

Meanwhile, Perseru Serui came to Malang determined to steal points. Being at the very bottom of the classification, Perseru wants to take advantage of the absence of many Arema players to be able to reach the points that can take them out of the red zone.

"Aremy's points at home are very important to us, even though they are a strong team, I also know that Arema has lost several players due to injuries, and there are also those who strengthen the national team in Indonesia," said Perseru trainer Wanderley Junior.