Home / india / First Details of The OnePlus TV Confirmed: It Will Have a 55-Inch QLED Panel

First Details of The OnePlus TV Confirmed: It Will Have a 55-Inch QLED Panel 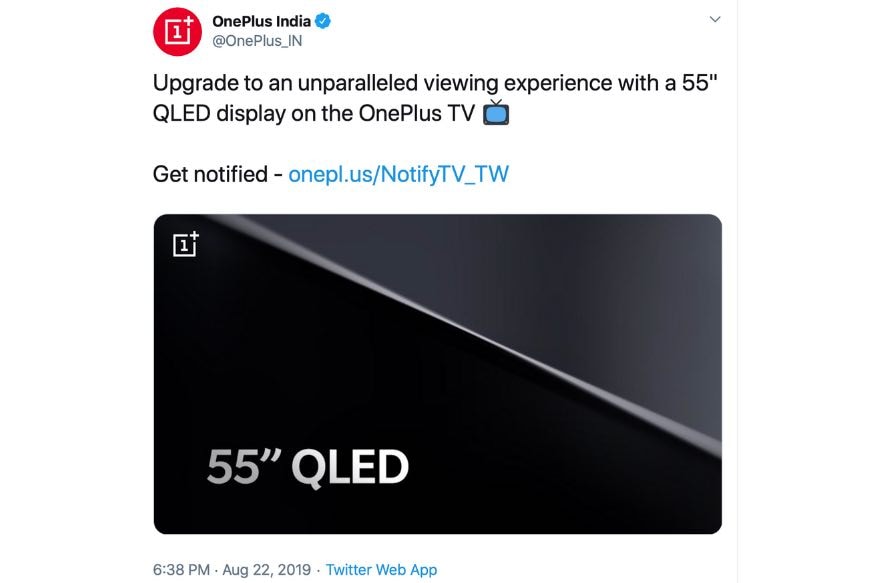 QLED TV panel technology is also used by Samsung, and is short for a quantum-dot LED screen.

QLED TV panel technology is also used by Samsung, and is short for a quantum-dot LED screen.

OnePlus is jumping into the battles in the TV space, with the launch of OnePlus TV. Till now, we had confirmation that it will be launched in September and that India will be the first country this TV will be sold in. The company is continuing to leave crumbs of information as the anticipation grows. The latest tweet from OnePlus confirms the first technical details of the OnePlus TV — it will have a 55-inch QLED panel, expected to have 4K resolution with HDR.

This is the first time OnePlus has officially announced any technical information about the OnePlus TV. What this announcement confirms is the existence of a 55-inch variant at least. That is not to say though that there would be more screen sizes as well. The details that emerged earlier about the filings made by the OnePlus TV company also suggest a 43-inch screen size option, as well as a larger 75-inch version as well. QLED TV panel technology is also used by Samsung, and is short for a quantum-dot LED screen. QLED panels rely on LED backlighting, and the quality that will have a huge bearing on contrast ratio and high dynamic range (HDR) performance. Simply put, this display tech is not at the same level as the similar sounding but very different OLED display tech. In an OLED display, individual pixels emit their own light, which then results in better local dimming and illumination of different parts of the screen, depending on the content being viewed at the time.

Subscribe to Moneycontrol Pro and gain access to curated markets data, trading recommendations, equity analysis, investment ideas, insights from market gurus and much more. Get Moneycontrol PRO for 1 year at the price of 3 months. Use code FREEDOM.