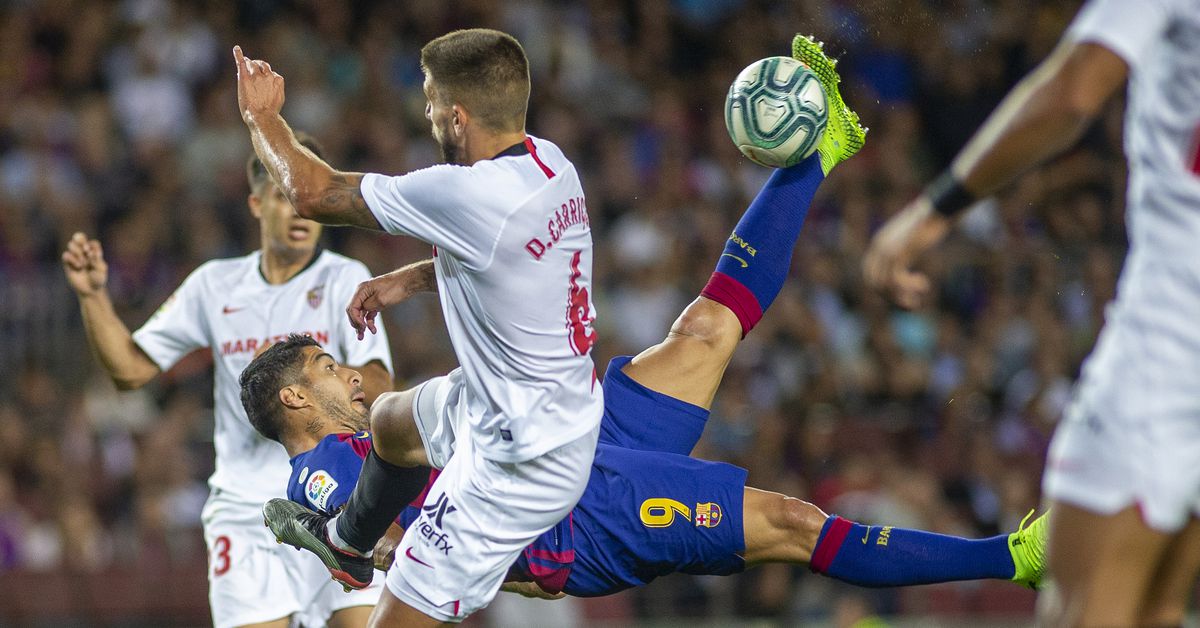 Barcelona moved into second place in the standings with an important win over Sevilla. Four different goal scorers found the back of the net, including all three members of the attacking trio of Luis Suarez, Ousmane Dembele and Lionel Messi, while Arturo Vidal also scored for the Catalans. The win did come at a great cost as three Barcelona players picked up suspensions.

Ernesto Valverde again made changes to the lineup, leaving Antoine Griezmann on the bench and replacing him with Dembele. Vidal started midfield in place of Sergio Busquets, while Jean-Clair Todibo starting alongside Gerard Pique with Clement Lenglet served a one-game suspension. While Jordi Alba did make the squad match, he didn't seem fit enough to start so Sergi Roberto and Nelson Semedo manned the two full-back spots.

Sevilla started the match in strong fashion, quickly creating a couple of half chances, but the Barcelona defense and Marc-Andre ter Stegen did their job, even if the German in the goal whiffed on an early cross that eventually went unpunished. Barcelona were looking to surprise the visiting side with their quickness in transition, but the Catalans were unable to create much. Most of Barcelona's early attacks came through the middle or left side where Semedo was looking lively.

But it would be Sevilla who would threaten first. The cross came from the right side where Pique allowed Lucas Ocampos to send a perfect cut-back pass to Luuk de Jong, who was given too much space by Todibo. The Dutchman wasted no time and fired on goal, but Ter Stegen made a marvelous save to keep the game scoreless. Ocampos was leading Sevilla on another attack just moments later, this time on the opposite wing, but Barcelona survived that attack as well.

Barcelona weren't without their attacks, but Tomaš Vaclik went largely untested. Sevilla on the other hand seemingly created a scoring chance whenever they came near him Blagurana penalty area. De Jong almost put Sevilla in front of a corner kick in the 18th minute but missed just enough to send it wide of the post. Messi had a decent chance to open the scoring from a free kick in the 23rd minute, but his attempt whistled over the bar.

A similar trend from recent weeks has been remerging where Barcelona dominated possession, but again turned the ball over too easily, and all too often allowed Sevilla through the midfield without much opposition. De Jong would have had another chance for Sevilla in the 26th minute but buried the header into the ground before the ball bounced over the goal.

Barcelona had not shown an awful lot until this point, but the very next minute, on the 27th, the Catalans took the lead. Again the hosts were attacking down the left side and Semedo sent a gppd cross in front of goal where Suarez was allowed too much space. The ball, however, was a bit behind the Uruguayan, though that proved no problem. Suarez set himself up with his back to the goal and raised it up for a bicycle kick that he buried past a helpless Vaclik.

Just five minutes later, Barcelona doubled their lead. Clearly buoyed by their arguably undeserving lead, Barcelona were back on the offensive, with Arthur showing good patience on the edge of the area in search of options. He found a great option in Vidal making a run through the middle and found him with a perfectly placed ball on top that the Chilean redirected into the back of the net. Three minutes later Barcelona added another, with Arthur pickup his second assist. The Brazilian found Dembele inside the area who poked Diego Carlos out of his pants and placed the ball into the far post for his first goal of the season. Shortly thereafter, Messi had another look from a free kick, but again his aim was off the mark.

The final ten minutes of the half were very calmer, even though the two sides exchanged attacks, but none led to much excitement and Barcelona were up by three going into the break, despite spending the opening 25 minutes clinging on for dear life.

Needing to turn things around, Julen Lopetegui made two substitutions before the second half kickoff. Joan Jordan replaced Óliver Torres while Munir El Haddadi took Nolito's place in a replacement for former Barcelona players. Sevilla almost pulled one back just four minutes after a turnover from an uncalled foul on Arthur, but de Jong hit the post in yet another missed chance for the Dutchman. It was yet another instance in which Matthew Lahoz swallowed his whistle.

Sevilla continued to press forward, but Barcelona were somehow still clinging to the clean sheet. On the other end, visitors were leaving plenty of space, but Barcelona was unable to exploit that space to the fullest. In the 60th minute, Messi came close to scoring his first one this season after a stunning run past several defenders, but his shot, seemingly destined for the far post, was tipped wide by Vaclik.

Barcelona made their first substitution in the 65th minute as Busquets replaced the fantastic Arthur while for Sevilla, Javier Hernandez replaced the snake-bitten de Jong. A couple minutes later, Vidal excellently found Dembele in space inside the area, but the Frenchman powered the ball way off target. Ivan Rakitić took Vidal's spot in the 70th minute.

Ter Stegen was forced into a good save in the 72nd minute, and on the same play Todibo was forced off the pitch after picking up a knock. He was replaced by Ronald Araujo, for whom the situation marked his Barcelona debut. In 78 minutes, Messi scored his first goal of the season – in excellent fashion. Stepping up for a free kick 20 yards out, slightly to the right, Messi didn't take his best shot, but it was more than enough to find the back of the net, even if Vaclik touched the ball with his fingertips. .

With five minutes left to play, Pique picked up his fifth yellow card this season, ruling him out against Eibar. Lahoz showed more of his true colors in the dying minutes of the match, showing two straight red cards to Araujo and Dembele – the first for a minor tug, the second for a complaint about the minor tug. Clearly, Lahoz was happy about the score and had to leave a mark. Barcelona secured three big points against Sevilla, but will be going to Eibar severely shorthanded due to Lahoz's quick trigger. International break up next.